Sandhill cranes are the oldest avian species on Earth, and hunting them is becoming the latest and greatest thing in waterfowling 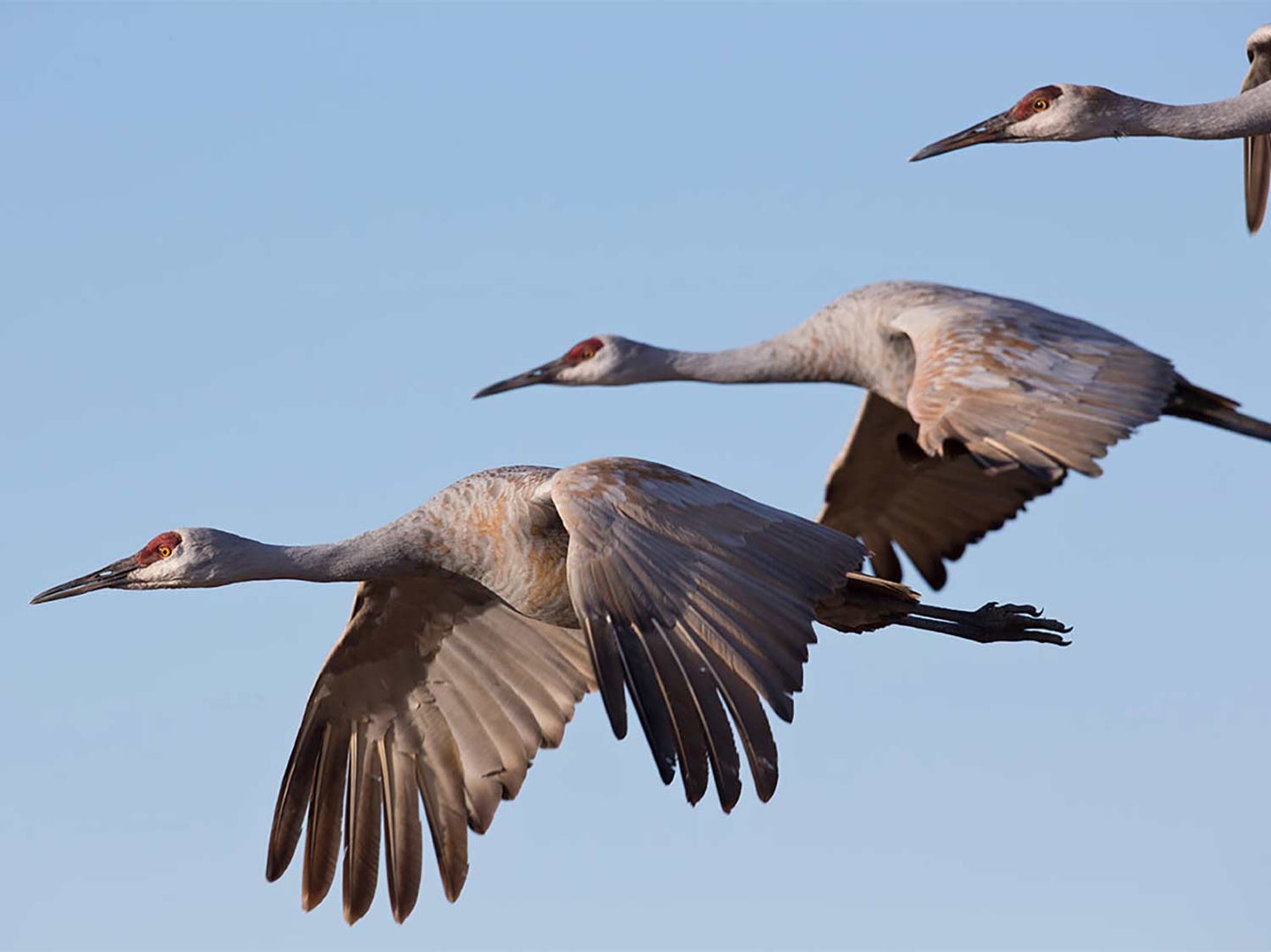 “Put that damned thing away!” Evan Stabolitis hisses in the dark. He’s sitting on a lawn chair somewhere to my left in the portable blind he and his half dozen guides constructed on the edge of a picked Oklahoma cotton field. Then, for emphasis, “You wanna get us all busted?”

He sounds exactly like the commander of a blacked-out submarine, imploring an oblivious sailor not to drop the wrench that will reveal their location to enemy destroyers and lead to lethal depth-charging. “You wanna get us all killed?” is what I heard, though I think Stabolitis actually said, “You all wanna kill limits, right?”

I snap shut my bright yellow notebook and tuck it in my camouflaged blind bag. Sandhill cranes are approaching in the breaking November dawn. We can hear their hoarse bugling as they rise from the distant Red River, and while shooting light is still 15 minutes away, Stabolitis isn’t taking chances. He tells the four of us shooters that there will be no talking once birds hook into the decoys.

“I don’t want to hear anybody whispering or see anybody twitching,” he says, channeling the voice of that submarine commander. “You move, we all lose.”

His caution is borderline laughable, but I figure that Stabolitis, who guides crane hunters on the High Plains of southwest Oklahoma and the Texas Panhandle, has seen—and been busted by—a lot more sandhills than I have. So I sit on my hands, keep my head down and my thoughts to myself, and wait for the cranes to spiral into our spread.

Putting aside a sandhill slaughter in central Saskatchewan when it seemed as though the juvenile birds had never seen a hunter—probably because they hadn’t—my experience hunting cranes has been a series of failures. Every year I try to kill a three-bird daily limit of Central Flyway sandhills in my home state of Montana, but every year the birds flare at the last minute from my paltry decoy spread, or a low-flying flock gains too much elevation for me to ethically pass-shoot them. I’ve spent hours lying under itchy burlap blankets on the shores of the prairie reservoirs where the birds routinely roost, expecting them to descend right onto my chest, only to have them pick an alternate spot for the night.

Friends who have had better success have treated me to grilled crane breast, confirming sandhills’ culinary reputation as “flying prime rib,” but the sharp-eyed birds have routinely had my number. So when Mario Friendy of Final Approach asked me to join him and Mossy Oak pro staffer Steve Reinhold in Oklahoma, I arrived with an empty cooler to pack all the birds I anticipated bagging, along with a heap of respect for cranes, which look more like pterodactyls than avian prey.

Though not quite as prehistoric as dinosaurs, sandhill cranes are thought to be the oldest living species on Earth, with fossilized specimens dating to 2.5 million years ago. Over those roughly 250,000 generations, the birds have gotten pretty wary. That’s why successful crane hunters have big spreads of hyperrealistic decoys, spend more time patterning birds than they do actually hunting them, and take care not to overhunt specific areas.

Stabolitis’ Tornado Country Outfitters promises to put hunters “in the eye of the storm” or, as he later called it, a “crane-nado.” Stabolitis is one of a handful of dedicated crane hunters who target lesser sandhills in the Red River Valley, where the birds stage for weeks or even months between their northern summering range and their wintering areas on the Gulf Coast and in the Mexican interior.

Our hunt started several hours before sunrise, and the operation looked like a cut-rate construction contract. Stabolitis’ guides had patterned cranes feeding in the cotton field the previous day, so we gathered a full two hours before dawn to erect our blinds, built out of prefab wall segments hinge-pinned together in the field. Then a lid is put over the top, and all hands gather cover, including cotton stalks, shocks of wheat, and even tumbleweeds, to cover the walls and roof.

Once the blind is up, the decoys go out, dozens and dozens of slate-gray figures in various standing positions, nearly all of them wearing the sandhill’s signature crimson pate. Friendy, whose business is waterfowl deception, offered his take on the economy of crane decoys.

“You don’t see many companies with them,” he observed. “It’s such a specialized market, and there’s such a cost involved in carving the masters and molding them to be extremely realistic, plus they’re physically big, which adds to their cost. Right now there are really cheap decoys and really expensive decoys on the market, but it seems there are more states opening crane hunts all the time, so it’s possible that it’s a growing market for a company with a great decoy at a good price.”

“If you talk to guides and outfitters who hunt them a lot, you’ll hear that decoys need to be realistic but also static,” says Friendy. “We used some windsocks in Saskatchewan last year, but with high winds, the decoys moved a lot and the birds had zero interest in them. What crane have you seen running around a field like it just drank a Rockstar? They are slow, calculated birds with incredible eyesight. Steady decoys with realistic paint is what you need. Some guys use stuffers [real taxidermied birds], which is the ultimate decoy, but hauling and storing them is a huge problem, and it takes lots of time and patience to set out a spread.”

For waterfowl hunters used to wailing on hail calls and producing other honks, squawks, and chuckles, crane hunting is a fairly subdued affair. There is very little calling.

“You want the birds to make up their minds,” says Stabolitis. “You don’t convince them of anything. We’ll call to get them to look at us, then shut up.”

Flocks of hundreds of sharp-eyed cranes lift off the Red River, moving and shifting in masses, not in the classic vee of migrating geese, but more like iron filings shivering around a magnet. It’s clear they see our decoys by their sudden redirection, but Stabolitis tells us to keep our heads down, so I can only guess at what happens next. The raucous yodeling of hundreds of sandhills gets louder, then a little fainter as they circle away from us, then louder—much louder—again, and then softer. This happens three or four times before Stabolitis sounds the command every waterfowler lives to hear: “Take ’em!”

We erupt from our cover, guns first, and open up on a funnel cloud of cranes no more than 20 yards above the cotton. The lot of us drop maybe a dozen birds, and Stabolitis sends out his Lab, Ice, a set of bug-eyed goggles strapped to his head.

Ice goes for the cripples first, and it’s here that a crane dog is either made or flayed. A crippled crane is like a spear with wings, its rapier beak ready to stab the eyes of a dog. The goggles are necessary protection, but a riled-up crane will go for the mouth, ears, or nose of a dog. Stabolitis doesn’t take chances. He meets Ice’s retrieve halfway and windmills any cripples, breaking their necks and adding them to the growing pile of limits in the blind.

The hunt ends with over a dozen beautifully plumed lesser sandhills, followed by blind deconstruction, then field dressing these prehistoric birds that will feed our crew tonight. As we relive the hunt back in a ranch house near Quanah, Texas, the dense, rich breast meat is better even than the best Red River beefsteak that ever kissed the coals. But that’s the perspective of a crane hunter who has come up empty many, many more times than he’s connected with the prime rib of the sky.