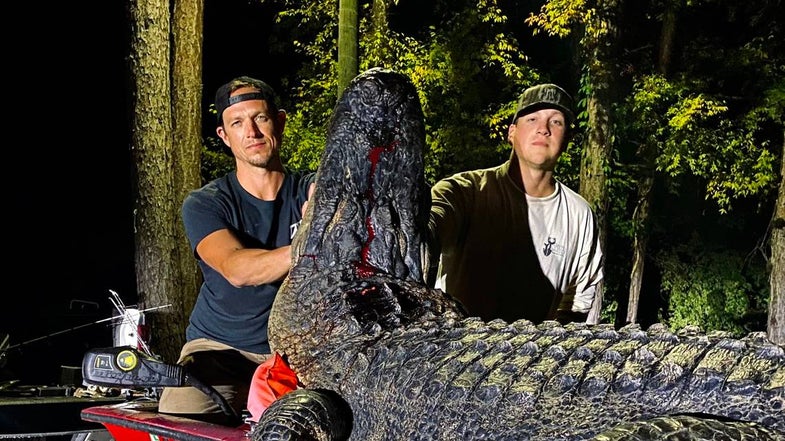 Brothers Cody and Charles Quirk from Harris County, Georgia, worked late into the night to tag one of the biggest alligators caught in Georgia this year. They spent seven hours that night before catching the gator, just a few days before the close of the Georgia alligator season in early Oct., according to the Columbus Ledger-Enquirer.

The gator came from sprawling Lake Harding, a widening of the Chattahoochee River that separates Georgia from Alabama just north of Columbus, Georgia.

The gator was well known locally as “Big Al,” and Cody, 32, says he’s seen and known about the gator for 15 years. He applied through Georgia’s department of natural resources for a gator license for seven years before finally getting one. When he finally did, he wanted to target “Big Al.”

“He [Big Al] was always under cover, whether it was trees hanging over or under logs,” Cody told the Ledger-Enquirer.  “It makes it really hard to get a hook into him without losing the hook or catching debris in the water.”

Cody hooked the gator one night, but the powerful reptile got away. A few nights later he was ready to try for “Big Al” again with help from his brother Charles, age 37. They launched a 17.5-foot borrowed bass boat into Lake Harding for another go at the gator.

Cody spotted Big Al and hooked him with heavy lines, but the gator was smart and wedged itself under sunken logs. It was an unwinnable situation, so the brothers left the gator for a few hours, hoping it would surface later, and they’d get another chance to get it.

They went after the gator several hours later and spotted it at the surface, eyes glowing in a spotlight they used. Each brother got treble hooks into the gator, and the battle was on.

“He broke our lines numerous times before we were able to get him up to the surface,” Cody told the Ledger-Enquirer.  “Once we hooked into him, he pulled us over 300 yards upriver.”

READ NEXT: How to Hunt Your First Alligator

At one point a line to the gator fouled on wood, and Cody had to get in the water to free the line, while the gator was beside the boat.

“When we had him next to the boat, he tried biting us a few times,” Cody told the Ledger-Enquirer. “But we’re very cautious.”

After almost an hour struggling with the reptile they killed the beast with a pistol, then hauled it aboard their bass boat using a harpoon with line attached.

A gator as big as Big Al could be 70 years old. And for years traps had been unsuccessfully set for Big Al, reports the Ledger-Enquirer.

“I wouldn’t have been able to do it without the help of my brother,” Cody said. “Thankfully, he’s as stubborn as I am.”