Mississippi Processor Finds 8,000-Year-Old Relics in the Belly of a 750-Pound Gator

An 8,000-year old dart point, an unfired modern bullet, and a "plummet" that was made 3,800 years ago were all found in two Mississippi alligators 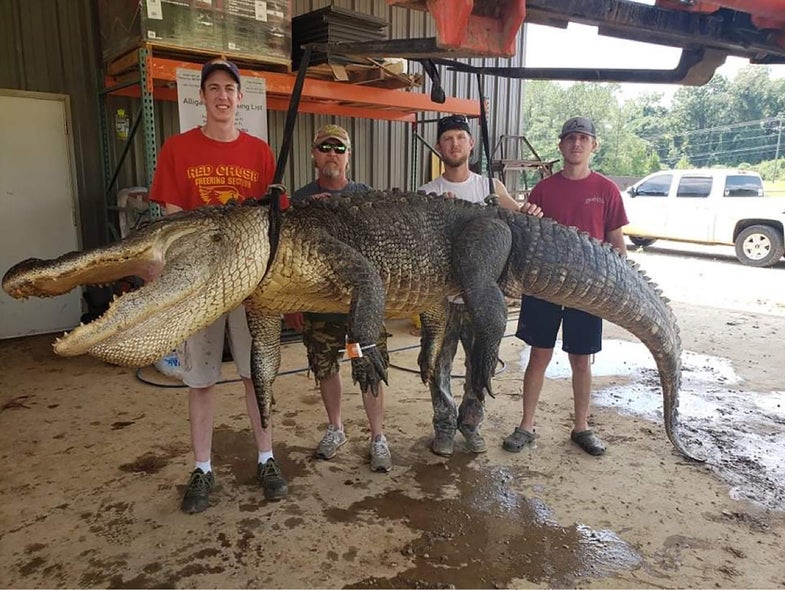 How artifacts wound up in the belly of this giant gator is unknown.
SHARE

Shane Smith, owner of Red Antler Processing in Yazoo City, Mississippi, had heard tales about big gators having unusual items in their stomachs. He had heard one story of metal dog tags being found inside an old gator. The tags were believed to have come from deer hounds the gators ate when they ventured too close to the water’s edge.

On Sept. 10, hunters brought a pair of Mississippi gators in for processing. Smith examined the stomach of a massive 13-foot, 5-inch, 750-pound gator and discovered what he thought was a broken stone arrowhead, and a tear-drop shaped object so heavy he thought it was a lead weight, according to a report in the Jackson, Mississippi Clarion-Ledger.

After showing a photo of the objects to an expert, Smith was stunned at what he learned.

“That’s an atlatl dart point,” said James Starnes, director of Surface Geology and Mapping for the Mississippi Department of Environmental Quality. He said the point was made between 5,000 to 6,000 B.C.

The atlatl is a primitive weapon that launches a spear having a point using a second piece of wood with a cup on one end that acts as a lever to increase velocity.

The second object Smith found in the gator, which he thought was a lead weight, was actually a plummet, according to Starnes. It’s about 3,800 years old. Starnes says it’s unclear exactly what plummets were used for in ancient times. They’re made from hematite, an iron oxide, and are heavy like lead. Smith had also examined the stomach contents of another 13-foot, 2-inch gator that weighed 787 pounds.

“We found a bullet in it, and it had not been fired from a gun,” Smith said. “I don’t know how it got in there.”

Smith learned that gators incidentally ingest odd items off the bottom of rivers, ponds, and sloughs where they’ve lived for years.

“Alligators are known for ingesting grit and rocks to help with digestion,” said Ricky Flynt, Mississippi Department of Wildlife, Fisheries, and Parks Alligator Program coordinator. “We know alligators and crocodiles do that.”

Stones and other debris found in lake bottoms that gators ingest can end up staying in their stomachs to help mash food.

“Sticks, wood, things they can’t digest get into their stomachs,” Flynt said. “I found a piece of cypress in an alligator’s stomach that was 15 inches long.”