The House Committee on Natural Resources passed a bill that would permanently authorize the fund. The bill still needs to pass the full house, Senate, and President 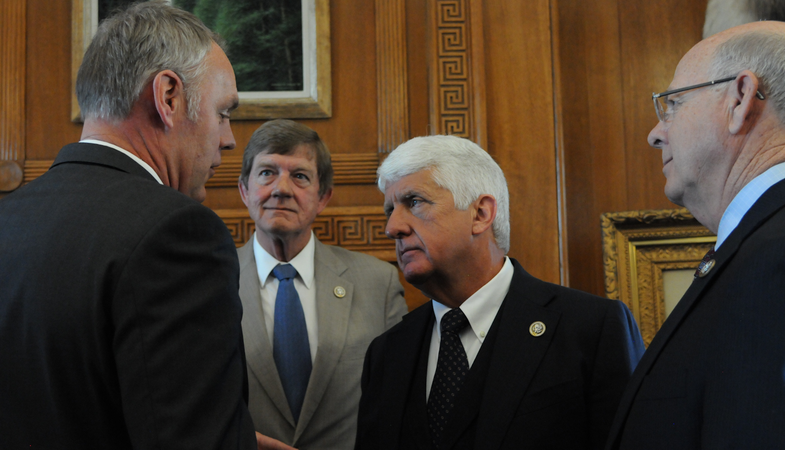 Rob Bishop (middle) is the chairman of the House Committee on Natural Resources which passed a bill to permanently authorize the LWCF. U.S. Department of Interior
SHARE

The lawmakers in Congress are acting a bit like characters in an Indiana Jones movie, snatching up the holy grail of conservation programs (the Land & Water Conservation Fund) as it teetered over the edge of a cliff.

Remember the backstory: The Land and Water Conservation Fund is one of the most powerful tools America has for conserving habitat and protecting access to the outdoors. Since 1965, LWCF has taken royalties from off-shore oil drilling and directed millions of dollars toward wildlife habitat, fishing access sites, along with urban parks and amenities. If you hunt and fish, odds are you’ve benefited from some investment of LWCF dollars.

The drama? LWCF is set to expire on Sept. 30. Sportsmen and conservationists teamed up to push for permanent authorization and full funding.

Progress was stalled in the highly partisan atmosphere of the House of Representatives Natural Resource Committee. Until yesterday, when that committee passed a HR 502, supported by both Democrats and Republicans, to reauthorize the law. That committee was widely seen as THE major hurdle to reauthorization, besides time and political inertia.

But the movie isn’t over yet. That bill still must pass the full House, pass the Senate, and be signed by President Trump. There are probably more hidden traps and venomous snakes to avoid. But the prize is in reach.

The bill does NOT authorize a specific funding level. So there remains more work to be done.

“We’re thrilled that Chairman Bishop and Ranking Member Grijalva are working together on a compromise that advances the Land and Water Conservation Fund in a meaningful way. We’re now one step closer to permanently reauthorizing LWCF,” said Julia Peebles, Government Relations Manager for Backcountry Hunters & Anglers.