Public Land Roundup: National Monument Trimming, Biking in Wilderness, and the Pebble Mine 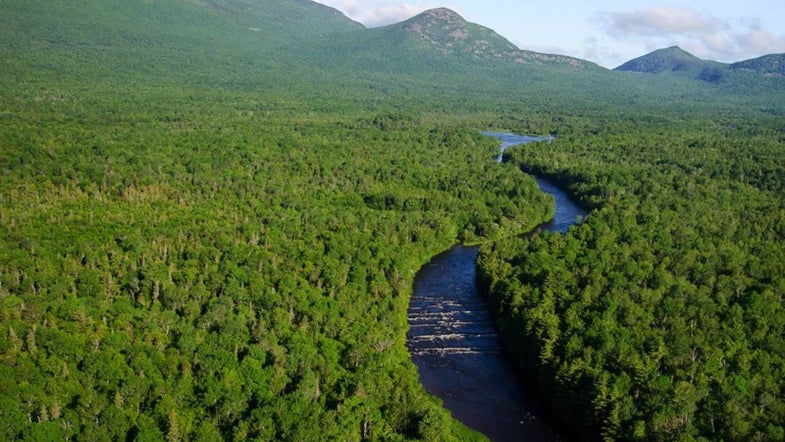 The eight were identified as candidates to be rescinded or resized in an Interior Department audit of the nation’s 27 monuments ordered by Trump in April. Interior Secretary Ryan Zinke issued the recommendations in a Dec. 5 memorandum to the White House. Monuments created by President Barack Obama were specifically targeted. They are:

In the same memo, Zinke said the national monument designation could be used elsewhere effectively, such as Camp Nelson, a 4,000-acre site that served as the third-largest recruitment and training center for African-American regiments during the Civil War.

Trump signed his two Dec 4. proclamations reducing Bears Ears and Grand Staircase-Escalante national monuments in Salt Lake City after a speech in Salt Lake City in which he claimed his actions would help local communities access the land for hunting and grazing.

“Here, and in other affected states, we have seen harmful and unnecessary restrictions on hunting, ranching, and responsible economic development,” Trump said. “We have seen grazing restrictions prevent ranching families from passing their businesses and beloved heritage on to the children.”

The ink on Trump’s proclamations had not dried before two lawsuits were filed in Washington, D.C., seeking to block the Bears Ears proclamation. With two days, at least three more were lodged in federal courts by dozens of environmental and public lands advocacy groups, outdoor clothing company Patagonia and five American Indian tribes

“When we see this kind of folly, we will meet it swiftly with a legal complaint,” Sharon Buccino, director of land and wildlife programs for the Natural Resources Defense Council, said in a statement.

“We will be fighting back immediately. All five tribes will be standing together united to defend Bears Ears,” Natalie Landreth, an attorney for the Native American Rights Fund, told USA TODAY.

The three Bears Ears lawsuits are:

The two Grand Staircase-Escalante lawsuits are:

— These 10 Photos Show Off the National Monuments Trump May Target

— Utah: How Trust Lands Will Be Affected By New Bears Ears Designation

— The value of Bears Ears is cultural

— Outside reporter: ‘I wasn’t banned—at least, not as far as I can prove’

A bill allowing mountain bikes to legally access all 765 designated wilderness areas on federal public lands was approved by the House Natural Resources Committee (NRC) on Dec. 3 in a 22-18 vote and could be presented to the full House for adoption in 2018.

HR 1349, sponsored by Rep. Tom McClintock (R-Calif.), seeks to “amend the Wilderness Act to ensure that the use of bicycles, wheelchairs, strollers, and game carts is not prohibited in Wilderness Areas.” The bill would not automatically lift the blanket ban on bikes in wilderness areas, but give local federal land managers discretion to determine if, and where, bikes should be allowed.

“People who enjoy mountain biking have just as much right to use the public trails as those who enjoy hiking or horseback riding,” McClintock said in a statement issued by his office. “Our wilderness areas were never intended by Congress to prohibit human-powered mountain bikes.”

The primary proponent of the bill is Ted Stoll, founder and executive director of the California-based Sustainable Trails Coalition, who has been lobbying Congress for two years to amend the 1964 Wilderness Act to allow bicycles, which are regarded as forms of mechanized travel and, therefore, prohibited in wilderness areas.

Despite Stoll’s support, the bill is opposed by the International Mountain Biking Association (IMBA), which represents 40,000 bikers and is the largest mountain biker constituency in the world.

“Believe me, I would like to see mountain bikers regain access to some wilderness trails as much as anyone,” IMBA Executive Director Dave Wiens wrote in a Dec. 9 blog. “However, we feel strongly that HR 1349, while addressing an important aspect of land-protection reform, is not in the best interest of mountain biking long-term.”

The IMBA joins more than 100 environmental groups opposed to the bill, which Los Angeles Times‘ columnist Evan Halper describes as “a political opportunity for Republicans eager to drill fissures in the broad coalition of conservation-minded groups united against the GOP environmental agenda.”

Halper writes on Dec. 19 that McClintock’s “measure is alarming conservation groups, including the organizations that maintain the Pacific Crest Trail and the Appalachian Trail, which together stretch through dozens of wilderness areas. They warn it would invite mountain bikers to shred through the iconic landscapes, despite assurances from McClintock that the measure empowers federal land managers to ban the bikes where appropriate.”

Stoll’s Sustainable Trails Coalition “has for years been seeking to open the Pacific Crest Trail to mountain bikes,” he notes.

Adam Sarvana, communications director for Democratic members of the House NRC, told M. John Fayhee of The Aspen Daily News on Dec. 18 that McClintock’s measure is a crass attempt to make it appear Democrats are voting “against allowing wheelchairs in wilderness.”

Savanna told Fayhee it is unlikely the bill will make it to the floor of the House and, if it passes, “it has almost no chance in the Senate.”

“We expect nothing will happen,” he said. “This was not a serious attempt to change the law. It’s a highly partisan bill that wasn’t negotiated with the Senate. It’s DOA.”

The Trump Administration’s proposal to withdraw Clean Water Act protections for Bristol Bay may breathe new life into the stalled Pebble Mine project, a massive gold and copper mine proposed within the Bristol Bay Area Plan (BBAP), a 12-million-acre sprawl of state-owned public land that features extensive wildlife habitat and houses the watershed of the world’s largest wild salmon fishery.

On Dec. 18, First Quantum Minerals announced it had signed an option to consider acquiring half of Pebble Limited Partnership from Northern Dynasty Minerals Ltd., committing $150 million over four years to help pay for the mine’s permitting process. The option is not a formal partnership between the two Canadian companies, but it is an indication that momentum to develop the mine, stagnate since 2011, has gained some traction.

In May, the U.S. Environmental Protection Agency and Pebble Limited Partnership resolved a 2014 lawsuit with a settlement that would allow the mine to apply for a Clean Water Act (CWA) permit from the U.S. Army Corps of Engineers before the agency begins the CWA process to specify limits on the disposal of discharge of dredged or fill material associated with the proposed mine. The EPA is, in essence, proposing to withdraw from requiring the mine to meet conditions in its July 2014 Northern Dynasty Preliminary Assessment.

That assessment concluded Pebble Mine would have “significant” impacts on fish populations and streams surrounding the mine site, and that a tailings dam failure would have “catastrophic” effects on the region.

During the ensuing 90-day public comment period that ended on Oct. 17, the agency received nearly 750,000 comments, including 26,000 from Alaska, eclipsing the number of comments for the 2014 preliminary assessment.

According to the EPA, the vast majority oppose the proposal, a tenor reflected by an overwhelming consensus of opposition in otherwise pro-development Alaska: More than 80 percent of Bristol Bay residents, 65 percent of Alaskans and Alaska Gov. Bill Walker are against it.

Pebble holds staked mining claims and mineral rights on 410-square miles of state-owned lands within Lake and Peninsula Borough, about 17 miles northwest of the village of Iliamna, near Newhalen and Nondalton. The mine would span many of the rivers and streams within the Bristol Bay watershed, where 56 million sockeye salmon returned to spawn this year, according to the Alaska Department of Fish & Game.

If fully developed, Pebble will generate up to 10 billion tons of mining waste that would need to be stored forever in an active earthquake zone, directly eliminating up to 5,350 acres of wetlands and destroying up to 94 miles of salmon-supporting streams on public land, claims the National Resources Defense Council.

According to an economic assessment by New York-based investment firm Kerrisdale Capital Management, the mine needs to be huge because its deposits are low-grade copper, gold and molybdenum. And it would be expensive, Kerrisdale notes. Mining Pebble would entail building a large power plant, a deep-water harbor, an 86-mile-long road, an equally long set of pipelines for moving copper concentrate, multiple dams that would rank among the largest on the planet and a floating liquefied natural gas platform.

The EPA is expected to issue its decision in early 2018. It is uncertain if the Alaska State Legislature could mitigate against the proposal because of the state’s mineral rights laws — although it could generate some pressure to amend those laws for future application.

— 6,300 miles of Michigan forest roads will open to off-road vehicles

A coalition of conservation, public land, and tribal advocacy groups filed a lawsuit in U.S. District Court for the Northern District of California on Dec. 19 challenging the Trump Administration’s suspension of the Bureau of Land Management’s (BLM) Waste Prevention Rule, which requires companies drilling on public lands to reduce methane waste.

The lawsuit, filed by Earthjustice, a non-profit public interest law firm, on behalf of 17 environmental and conservation groups, seeks to have protections that reduce natural gas that is leaked, vented, or flared put back in place.

The rules went into effect in January 2017. Industry trade groups and several states have tried unsuccessfully to get a court to prevent the rule from going into effect. In May 2017, the U.S. Senate voted not to repeal the rule in a 51-49 vote. Nevertheless, the Trump Administration unilaterally suspended parts of the rule. An October ruling subsequently struck down the administration’s actions. On Dec. 8, the administration attempted to stay compliance for one year while it rewrites the rule. Earthjustice’s Dec. 19 suit seeks to keep those measures in place.

The BLM rule updates 30-year-old methane waste regulations that did not reflect the dramatic advances in oil and gas drilling technology or the rapid expansion of drilling operations on public lands in recent years. According to Earthjustice, the rule saves taxpayers millions of dollars in royalties every year and reduces harmful cancer-causing and smog-forming pollution. It also reduces pollution from methane, a greenhouse gas 87 times more powerful than carbon dioxide.

Environmental and conservation groups say the rule implements cost-effective strategies used by leading companies to reduce methane waste and already in place in many states, including Colorado and Wyoming.  These strategies include requiring companies to monitor wells for leaks, repair faulty equipment, reduce noisy and wasteful flaring, and capture unnecessary natural gas emissions.

The rule was drafted and adopted after years of deliberation and public input, including public hearings in New Mexico, Oklahoma, Colorado, and North Dakota. The BLM received more than 300,000 written comments that were overwhelmingly in support of the rule.