In the Future: There Will Always Be Public Hunting Land in America 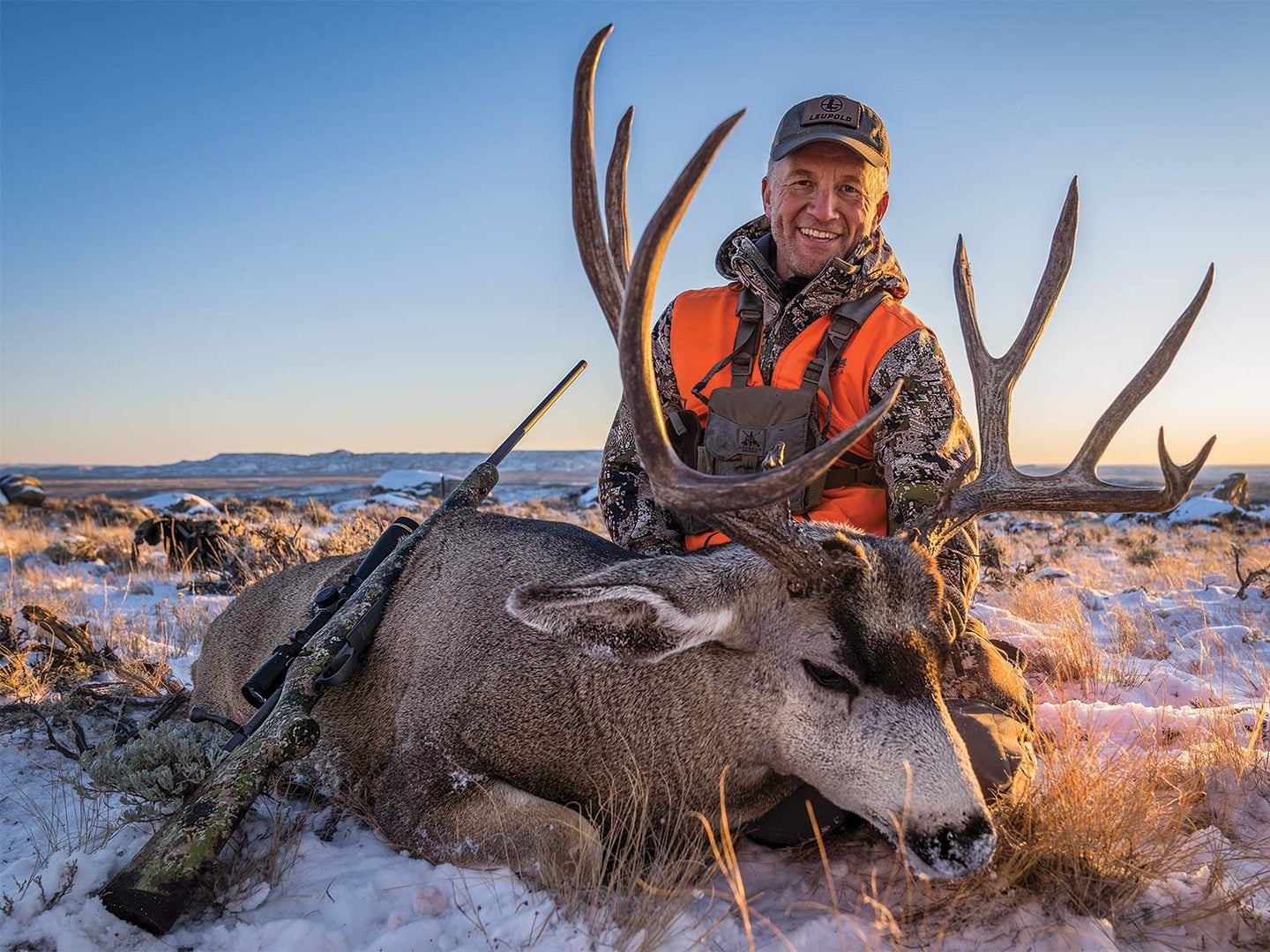 I glass the frigid canyon before me, looking for mule deer on a late October afternoon. I’m hoping to spot an old buck traveling from his high National Forest summer basin to wintering grounds somewhere out there. This is western Wyoming, and “out there” means the general direction pointed out by a local rancher who has spent 68 years watching these deer. The migrating herds would be headed for Bureau of Land Management lands to the south, where spring green-up (hopefully) arrives in time to ward off the ghosts of winter starvation each year.

It took 26 failed applications before my name was finally pulled from the state’s lottery and I was awarded this rare deer permit. But that’s a short amount of time compared to the 12,000 years these hardy deer have traversed this route.

Buck after buck files down from the basin as I wait. Most of them are young, and each has been taught by its mother to follow this route to the winter range, then retrace the 100-mile course every spring.

Migration is a big risk to these deer, and that risk is amplified by rapidly occurring man-made disruptions to their landscape. When winter habitat is impaired, the rewards for migrating—food and cover—shrink. But still, mule deer have made this gamble for millennia, and they have mostly won.

Eventually, I spot an old buck making his fifth migration. The crack of my rifle, stifled by the wind, marks it as his last. As I kneel beside the deer, my feelings of gratitude temporarily relieve the pain in my hands, frozen in the subzero windchill.

Stroking his slick coat, I can’t help but wonder: How did this all happen, that I would be standing here on public ground in this perfect moment?

I like to think it started with Thomas Jefferson. When our third president nearly doubled the size of the United States with the Louisiana Purchase, nobody knew how those lands would shape our ­national identity. Other countries (and the native tribes who already lived there) knew the value these lands held, and early Americans fought, killed, and died colonizing them. Treaties to avoid another war with Great Britain (1846) and to end a war with Mexico (1848) added another half-billion acres to Jefferson’s acquisition, filling in nearly the rest of ­today’s continental United States, and putting the final pieces of our public-land experiment into place.

I killed my buck in the same area where mountain men roamed almost two centuries earlier. Just across the Green River, these free trappers would hold a rendezvous each spring to trade their pelts and celebrate the bounty yielded by these lands. I wished to see this place as they had, with a hunter’s eye and adventure in my heart.

The conservation of these hunting grounds did not happen by accident. It took the leadership of our 26th president, Theodore Roosevelt, who said, “The nation behaves well if it treats the natural resources as assets which it must turn over to the next generation increased, and not impaired, in value.” Someday you and I will turn our natural resources over to that next generation in Roosevelt’s vision. That’s going to require our vigilance and advocacy.

All that history and turmoil led to this cold afternoon with me standing in a pocket of sage, enjoying what untamed land was left over after homesteaders, railroads, and mining and timber companies had staked their claims.

As I hike out with warm hunks of venison in my pack, the purple glow of last light gives way to darkness, revealing a horizon pocked with the flashing red and white lights of distant oil rigs, showing the pressures we put on our lands.

All future paths lead to increased competition for space and resources, with each generation seemingly more disconnected from nature than the last. Heavy thoughts to go with my heavy pack.

But as hunters, we are inherently optimists. So from the depths of my optimism came a realization: It’s economic progress that will ensure America’s public lands will be here for generations to come. Both Jefferson and Roosevelt were captivated by the potential of the West, but they were not preservationists. They didn’t acquire and conserve natural places only for the sheer joy of experiencing them. They also saw utility in the land. By using it, we value it. When we value something, we work to conserve it.

Even though it’s been 35 years since I took ­Economics 101, the laws of supply and demand have stuck with me. It goes like this: Items with a limited supply increase in value as we increase our demand for them. These principles apply to everything from toilet paper to our public lands.

Lands that are critical to our outdoor pursuits are certainly in limited supply. We have 640 million public acres in the United States, with varying degrees of accessibility—a number that has held steady since Roosevelt’s time. Private land ownership and our country’s population are not nearly as static.

Over my lifetime (barring a premature demise in wild grizzly country), the number of Americans will have doubled. To accommodate all these new residents, we pave more than 1.5 million private acres each year. (For perspective, Yellowstone Park is 2.2 million acres. In the years since I first applied for my Wyoming deer tag, the equivalent of 10 ­Yellowstone Parks were surrendered to the dozer.)

As Andrew McKean writes on p. 54, some of these private lands are being restored to their natural habitats by private dollars, but still, millions more acres are developed. Lost private acreage permanently deflects pressure to our public lands. Subdivisions and cities won’t provide the experiences we seek or the natural resources we need. In contrast, public lands are kept intact by our governing institutions. Advocacy comes from avid outdoorsmen and women who value wild places. We become part of them, and they become part of us.

I’m no Jefferson or Roosevelt. Yet, from my experiences advocating for public lands, I have learned a lot about them. The public lands of the United States could represent the greatest accumulation of shared wealth on this planet.

A public-land awakening in America is underway. As I type this, Congress has passed powerful legislation that will fully and permanently support the Land and Water Conservation Fund at $900 million per year. The LWCF is used to acquire new public lands and support access projects, including everything from local parks to backcountry trails. This is happening despite a global pandemic and the looming partisan battles sure to come with this fall’s elections. And it’s happening because of the grassroots advocacy from the American people. In a country governed by a Constitution that allows a judiciary to uphold landownership rights (both private and public), the immense value coming from Jefferson’s inadvertent public-land experiment grows with each passing year.

By the time I make those last heavy steps back to the truck, I’m more than optimistic. I’m confident in our path ahead. Like the mule deer, Americans need wild public lands in order to thrive. We need them in order to be, well, American.