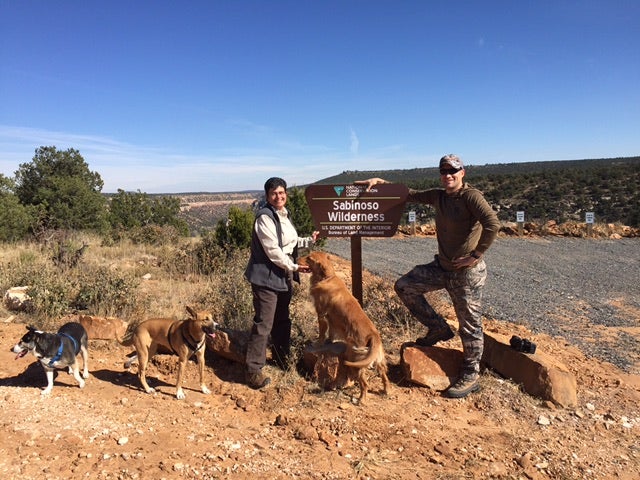 Backcountry Hunters and Anglers member and Air Force veteran Brad Jones from Albuquerque drove up first thing in the morning to hunt turkeys. He was there waiting for Sarah the Taos BLM manager to open the gate to the Sabinoso Wilderness. Office of Ryan Zinke
SHARE

The news around the Sabinoso Wilderness Area in north-central New Mexico is a breath of fresh air, in an era when access to the outdoors is rapidly eroding and elected officials seem more interested in squabbles than solutions.

The Sabinoso Wilderness is 16,000 acres of rugged canyons about 50 miles from the small city of Las Vegas, New Mexico. It’s public land, managed by the Bureau of Land Management and owned by all Americans. Its home to elk, mule deer, black bear and turkey.

However, there was a catch. All the land surrounding the Sabinoso is privately owned. That meant rank-and-file outdoorsmen or -women could not set foot on the area without either having special permission or trespassing.

That changed this week when BLM Taos Field Manager Sarah Schlanger literally swung open the gates leading to the Sabinoso. Now the wilderness area is open to people willing to put in the effort to explore it.

Creating that access was no simple task. Over the past few years, the BLM, the Wilderness Land Trust and conservation-minded land owners worked out a complex deal of donations and purchases. In the end, BLM accepted 3,300 acres of donated land and purchased another 1500 acres of inholdings to guarantee public access.

New Mexico’s US Senators, Tom Udall and Martin Heinrich, both Democrats, ushered the deal along over several years. Secretary of the Interior Ryan Zinke, a Republican, threw his support behind the deal after visiting the area this summer.

“So many people worked so hard to get this deal through,” said New Mexico Wildlife Federation Executive Director Garrett Vene Klasen. “It’s amazing to see all the hard work put in by our NMWF members, Senator Heinrich, sportsmen’s groups, and the local community finally pay off. I look forward to seeing our members enjoy this new hunting area for years to come, and applaud everyone who made this happen.”