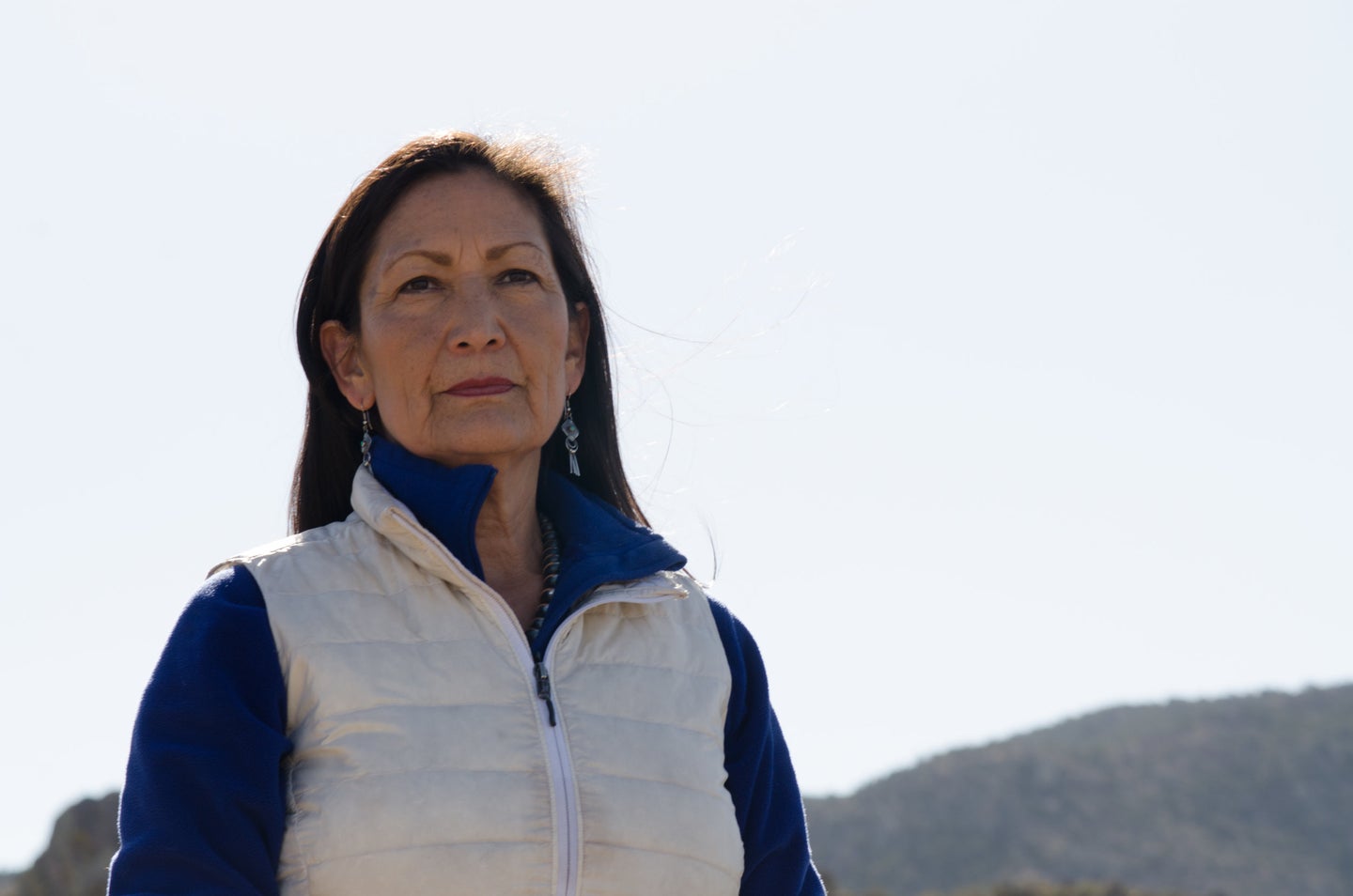 Energy policy will be a key issue for president Biden's Secretary of the Interior. Deb for Congress
SHARE

The themes that will likely frame public-lands management over the next four years were on full display as U.S. senators began confirmation hearings for President Biden’s pick to run the sprawling Interior Department. In her first appearance before the Senate Energy and Natural Resources Committee today, New Mexico Rep. Deb Haaland was asked to reconsider her vocal opposition to fossil-fuel extraction, whether Biden’s “pause” on permits to drill for oil and gas on federal lands would be permanent, and whether she has an expansive or limited view of national monuments.

But if senators expected Haaland, a first-term congresswoman and the first Native American to be nominated as Secretary of the Interior, to give them clear answers about the direction she might take the department, they were probably disappointed.

Her background—as a Native woman, 35th generation New Mexican, single mother, small-business owner, law-school graduate, and one of the first Native women to be elected to Congress—didn’t factor much in today’s hearing.

Instead, Haaland repeatedly told the committee that her personal views on topics as polarizing as national energy policy and endangered-species management would be subjugated to the president’s. When asked about her public record opposing fracking, pipelines, and most fossil-fuel infrastructure, she noted that previous statements “reflected my one small district in New Mexico. My role as secretary would be highly different. I would defer to the president.”

Still, the themes that emerged are bound to be reprised in tomorrow’s second round of questioning and—should she be confirmed by the full Senate—will likely dominate her tenure as head of the agency that controls about a fifth of the real estate of the United States, much of it in the West.

The dominant theme of the first day of questioning is the role that federal lands play in national energy policy. Under her Trump-appointed predecessors, Ryan Zinke and David Bernhardt, drilling for oil and gas was accelerated on public lands in a mission to deliver “energy independence” to the U.S., which became a net exporter of fossil fuels during Trump’s administration. One of Biden’s first acts as president was to order a “pause” to issuing new permits to drill or frack on federal lands as his administration reviews policies and starts what’s expected to be a turn away from fossil fuels and toward renewable energy as part of his initiative to reduce climate-affecting carbon emissions.

Haaland has a record supporting policies that have been dubbed the “Green New Deal” for their role in combating climate change and creating new jobs. That alarms Western senators who represent states with economies built around extractive industries like oil, gas, and mining.

Sen. John Barrasso, a Republican from Wyoming and the ranking minority member of the committee, asked Haaland for one-word answers to his staccato questions.

“As a general matter, should the federal government continue to permit oil and gas wells in this country?” Barrasso asked.

Haaland, pausing before her answer: “Yes.”

Barrasso then asked Haaland to justify what he called Biden’s “long-term leasing ban” and the consequent expected loss of jobs in the oil and gas industry, which he reckoned might cost Haaland’s home state 62,000 jobs plus another 33,000 jobs in Wyoming. “Why not just let these workers keep their jobs?” he demanded.

“It is my understanding that President Biden has put just a pause on new leases,” she told Barrasso. “He didn’t ban new leases. It’s not a moratorium. Instead, it’s a pause to review the federal fossil fuel program. I know there are still thousands of leases and permits moving forward. I don’t believe it is a permanent ban. I am more than happy to work with you and at the pleasure of the president… to make sure we’re doing everything we can to create jobs for Americans.”

Senators from other energy-exporting states had similarly aggressive questions for Haaland, but New Mexico’s Martin Heinrich put a point on the choice that faces the next Interior Secretary, as well as the nation’s energy policy.

“We do recognize that we will need to move to a fully decarbonized economy,” said Heinrich. “And, frankly, pretending that that isn’t going to happen is not going to serve any of our workers well. I’d submit that energy workers would be best served if we both invested in energy communities and in technology that allow us to actively manage this transition.”

Another theme that defined today’s hearing was whether science would be used to guide Haaland’s decisions.

Montana Sen. Steve Daines, after confirming Haaland’s commitment to science, produced a poster of the Greater Yellowstone Ecosystem, and asked her about grizzly bears in the area shared by Wyoming, Idaho, and Montana, which are currently protected as federally endangered species.

“When do you believe an endangered species has recovered?” Daines asked. “And if [recovered], do you believe in turning wildlife management authority back to states?”

Those decisions should be guided by science, Haaland responded.

“Do you know what recovery criteria are for grizzly bears in the Greater Yellowstone Ecosystem?” Daines pressed. “Five hundred bears. Do you know how many bears we have in the Greater Yellowstone Ecosystem? The most conservative estimate is 728, and many estimate the population is closer to 1,000 bears, well above the recovery criteria and above the carrying capacity. Yet in 2019 you co-sponsored legislation that provided federal protections for the grizzly bear into perpetuity – forever. Why would you sponsor that when science tells us the bear numbers are well above recovery targets?”

Haaland said that at the time “I was caring about the bears,” but that she would be “happy to look at the issue, and if I can help with the issue, I’d love to speak with you more about it.”

What’s next for national monuments?

Utah Sen. Mike Lee asked Haaland to weigh in on national monuments, noting that monuments have been treated “like a political football, tossed back and forth between political parties” as competing presidents enlarged and then reduced their size. That “ricochet effect” hasn’t served communities that live near two controversial monuments in Utah, Bears Ears and Grand Staircase Escalante, says Lee. He then asked Haaland whether she would abide by the language of the Antiquities Act that empowers presidents to designate monuments “confined to the smallest area compatible with the proper care and management of the object to be protected.”

Haaland noted that the ancestral homeland of the Pueblo Indians—of which she is a member—is in Utah and that “it covers a very wide space.” And she admitted to a bit of jealousy of Lee’s state because of the beauty of its landscape.

“It is beautiful,” retorted Lee. “But the monument designation does not make it more beautiful. It does tend to make the communities that don’t support [national monuments] more impoverished, and that’s what concerns me.”

Haaland, looking visibly wounded by the sharp comment, took a breath and thanked Lee. “I appreciate you sharing that knowledge with me.”

The Senate’s Energy and Natural Resources Committee will take up a second round of questioning Rep. Haaland tomorrow, Feb. 24, starting at 10 a.m. EST. Assuming the committee votes to confirm Haaland, a confirmation vote of the full Senate is expected in early March.