It’s man vs. coyote in one of the wildest photos we’ve ever seen. 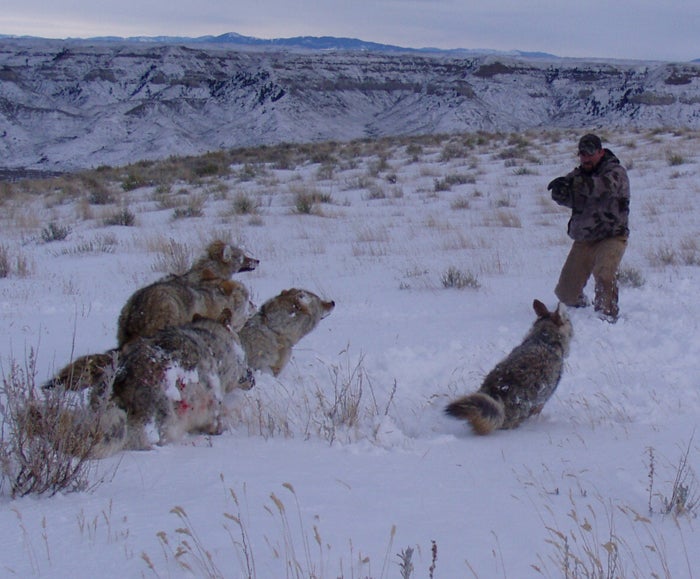 UPDATE: Andrew McKean tracks down the truth about the Coyote Showdown. Read comment 75 Hunting Editor Andrew McKean received these two amazing photos with a vivid description of what must have been one of the wildest coyote hunts ever. Here is the note that came along with it… "The picture is for real and so is the story. Aaron's friends were checking snares around Geraldine and decided to stop and call in a spot. One had a .204 and a .22 pistol. The other had a camera. They called for 15 minutes and brought in the pack of coyotes that they couldn't see until they were 20 yards away. The shooter shot twice with the .204 rifle as the coyotes closed in. The dogs didn't know where to go and were jumping around, barking, etc. By the time he made the second shot they had moved in to 10 yards and he couldn't see anything but hair in his scope, so he put the rifle down and grabbed his sidearm. He stood up and started firing into the pack of jumping dogs. The picture makes them look like they're charging but they were just bouncing around trying to figure out what to do. The shooter emptied his sidearm and managed to get a bullet into each coyote. Pretty wild.".
SHARE

It’s man vs. coyote in one of the wildest photos we’ve ever seen.