Tips and Tactics: How to Hunt Black Bears

This is an excerpt from Hunting Editor Andrew McKean’s book, How to Hunt Everything, which is available here. Keep an... 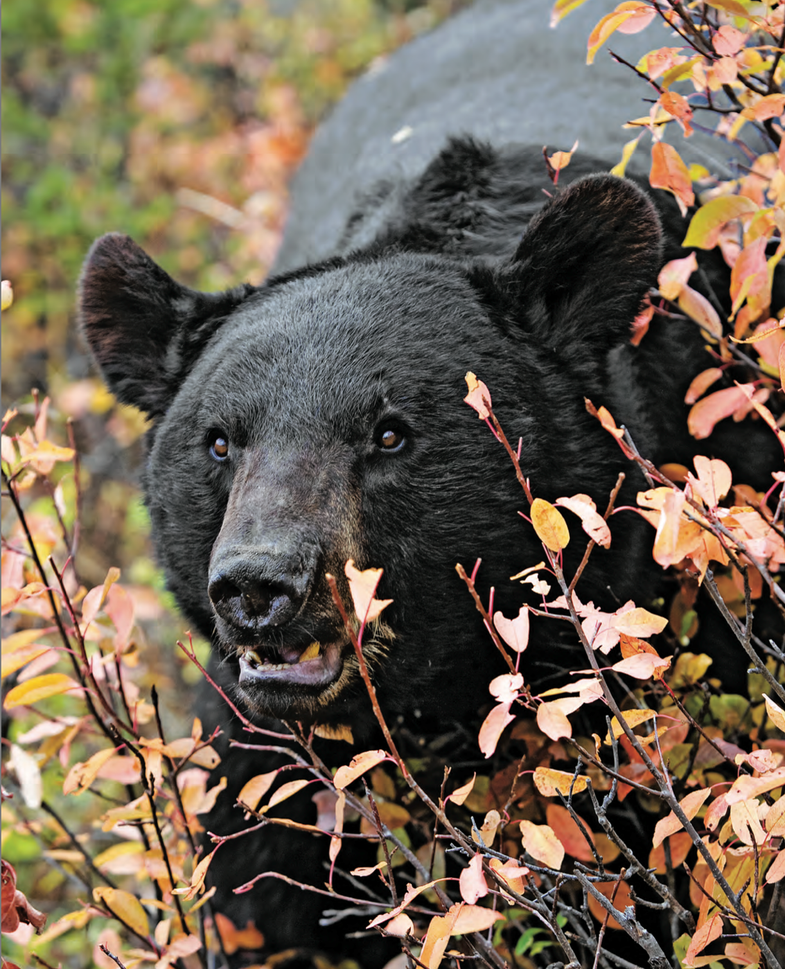 This is an excerpt from Hunting Editor Andrew McKean’s book, How to Hunt Everything, which is available here. Keep an eye out for more species and how to hunt them.

From New Jersey’s suburbs to the Cascade Mountains above Portland, black bears shuffle about, making a good—and for the most part, quiet—living. With the dietary preferences of a Labrador retriever and the survival instincts of a whitetail, Ursus americanus occupies nearly every habitat niche in North America, and styles of hunting vary as much as black bears’ range: hunt in spring or fall, walk down or use a stand, bait or chase with hounds. They may not have the headgear of our antlered ungulates, but black bears are very game, indeed.

Next to whitetails, black bear may be the most actively pursued big game in North America. In Alaska and the Pacific Northwest, black bears grow fat on a diet of berries and fish. Along the spine of the Rockies, they gorge on yarrow roots and elk calves. They range all across the Great Lakes country and north toward Hudson Bay. And in Pennsylvania, some of the continent’s largest bears are pursued by parties of hunters who post shooters and push brush with the precision of field marshals and the collective intensity of grand juries.

Black bears roam from New England south to Florida and across the Southeast. Bears are returning to their native habitats in the Ozark Mountains and the piny ridges of the Great Plains. But wherever they live, black bears prefer dense timber, a variety of food available from spring through late fall, and enough room to allow them to avoid their main persecutors: humans. 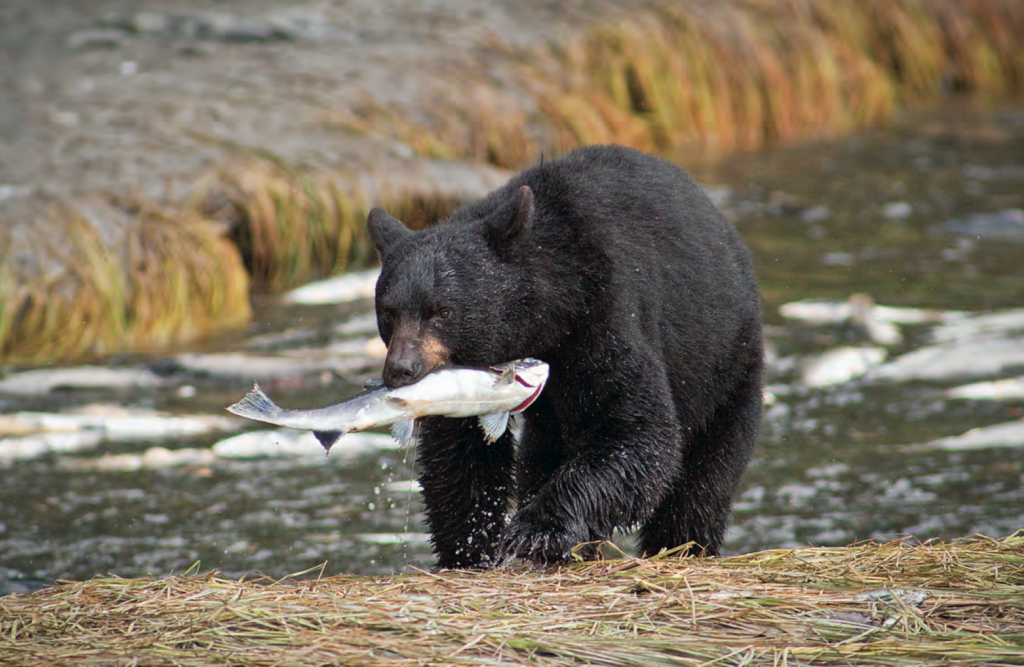 If bears are our most opportunistic foragers, we are their most relentless predators. We tend to think the worst of a bear. It’s going to break into our home. It’s going to kill our livestock. It’s going to eat our dog’s food. It’s going to maul our children. Yes, black bears will do all those things, but it’s the rogue specimen that intrudes on our settled world. Most black bears exist on our periphery without causing a spectacle or a problem.

But when we enter their world as hunters, our antipathy toward bears turns to something approaching admiration. How can they grow to such remarkable dimensions—a bear killed in New Jersey weighed 829 pounds (376 kg)—and live on such a varied diet as acorns and roadkill, wild mushrooms and whitetail fawns?

It’s an unusual bear hunter who doesn’t at some point make a connection between ourselves and our prey and pursue them with a mixture of fear and curiosity.

Many states and provinces offer spring bear seasons, and hunters who frequent food sources find bruins hungry from hibernation. In the West, hunters drive forest roads, where greening clover attracts bears, or glass south-facing avalanche chutes to find black bears gleaning the first succulent growth of spring. But if you are interested in better quality hair and meat, fall’s the better time to hunt, as bears are foraging widely in front of their winter-long slumber.

To stalk a bear is to employ every hunting skill you possess. You must play the wind, as black bears have prodigiously sharp noses. You must walk silently, as their triangular ears are keen and stereophonic. You may fool a bear’s myopic sight, but if its other senses detect your approach, you won’t get close to these remarkably adaptable, hardy, and savvy animals. 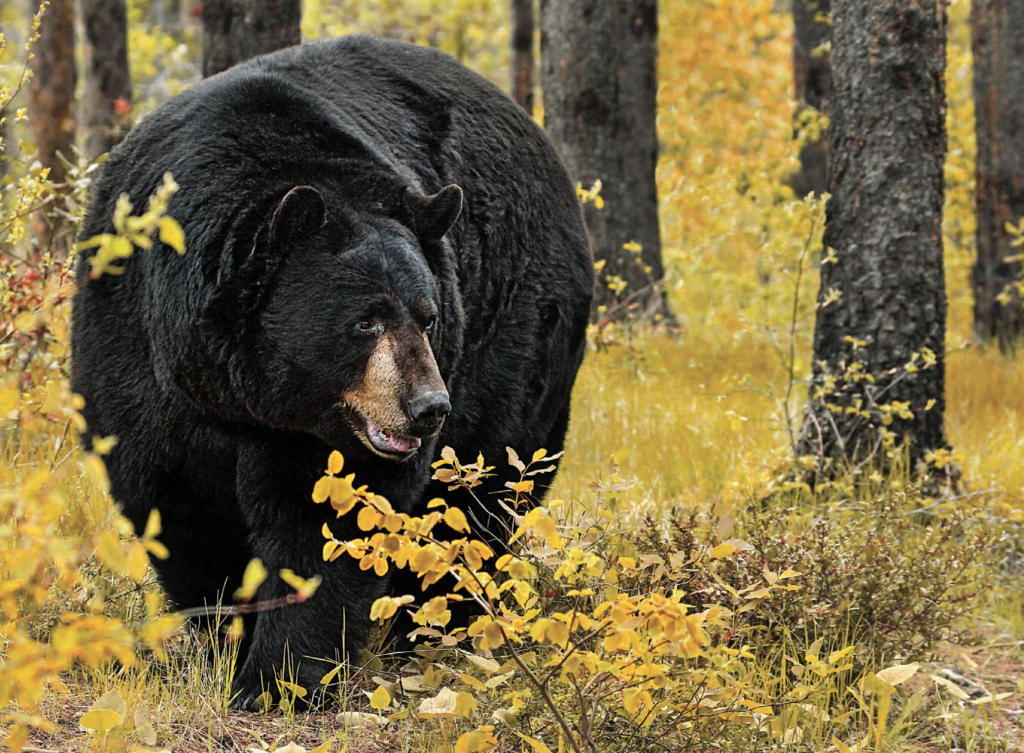 Though its name suggests otherwise, color is the least reliable identifier of a black bear. Ursus americanus comes in browns, blonds, reds, and chocolates. Because they are often hunted for the quality of their hide, a color- phase bear is a trophy, indeed.

In one camp I hunted in Alberta, half the bears killed were as chocolate as candy bars. The prettiest black bear I’ve killed is a blonde with white highlights that looked like a silvertip grizzly as it sluiced through the spring woods of Saskatchewan.

Color is a hard attribute to predict or sustain in a population, but generally, you’ll find more colorful bears inland and in southern latitudes than along the coasts. That may be because in the warmer, more open habitats of the West, black hair may make bears more susceptible to heat stress than their lighter-colored kin.

THE ETHICS OF BAITING
To bait or not to bait? That is the question that many black bear hunters ask themselves at least once in their careers. More than half the jurisdictions that allow black bear hunting also allow hunters to set out baits that lure bears into specific spots. Is that sporting? Is it ethical?

The answer, like most matters of ethics, is situational. In many areas where baiting is legal, the habitat is dense, boggy, and largely inaccessible. Baiting may be the only consistent way to reliably see bears, especially later in the spring—when leaves and underbrush obscure much of the forest.
On the other hand, many hunters feel that using bait is an inappropriate crutch that habituates bears and makes them dependent on the handouts of humans whose only interest is in killing them. These hunters prefer to pursue bears in their unaltered habitat, either by tracking them in tight cover or by glassing them as they move across the vast landscape of their home.

This latter method is my favorite, and in my home state of Montana where baiting is prohibited, glassing high-country meadows and avalanche chutes can be effective for mobile hunters. But I see the value in baiting bears. Fundamentally, baiting ensures both positive identification—reducing the chance that a hunter will kill a sow with cubs or a young bear—and a quick, killing shot, since encounters are at close range. 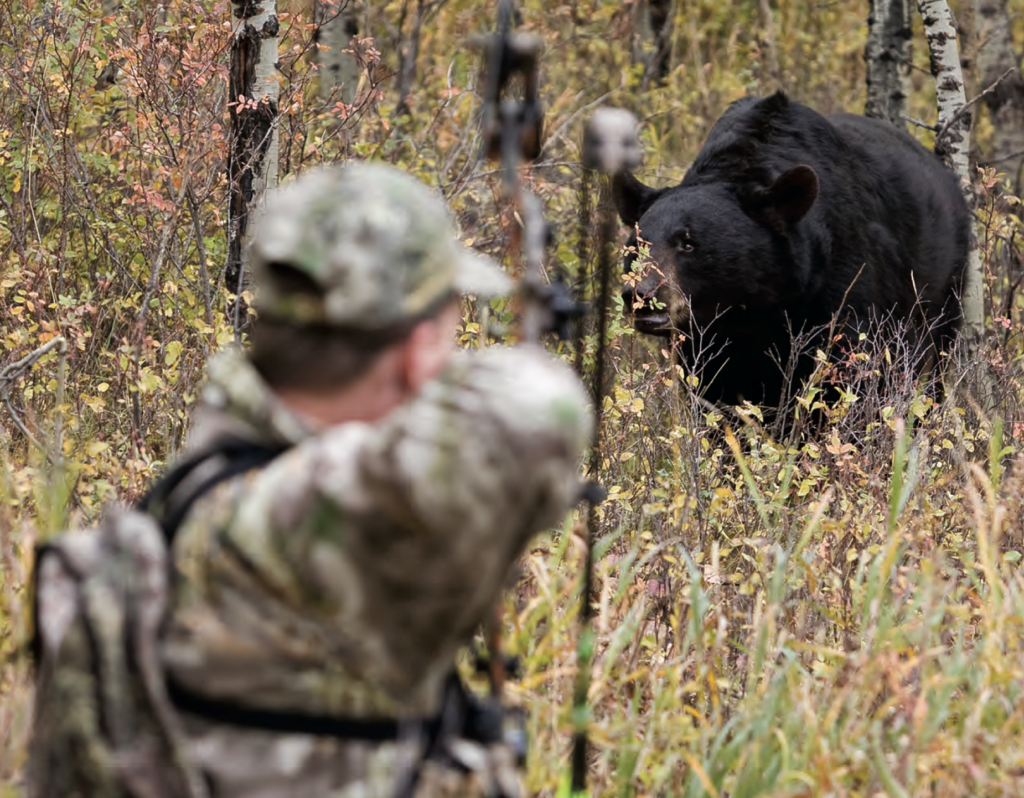 FIELD SKILLS: HOW TO JUDGE A BLACK BEAR
Because they don’t have distinctive antlers or other obviously measurable attributes, black bears can be among the hardest big game to judge in the field.

Add long, dark-colored hair and their habit of hanging around densely foliaged, shadowed habitat, and you can understand why “I thought it was bigger” is one of the most frequent refrains of successful bear hunters as they approach their trophy.

Here are five elements to consider as you size up your next black bear.

1. Identity
First, are you sure it’s a black bear and not a grizzly? In areas where their range overlaps, know how to distinguish the species. Grizzlies often have shoulder humps, concave faces, long claws, and tend to be larger than black bears. Hair color is the least reliable way to identify a bear. Once you’ve positively identified the bear, ensure that it does not have cubs—either roly-poly yearlings or larger, blockier two-year-olds.

2. Context
Is the bear in the very midst of prime forage? The center of the berry patch or the best fish-catching riffle in the river? That’s probably a dominant boar. Black bears that lurk on the periphery likely are juvenile or smaller specimens.

3. Attitude
Does the bear walk with a swagger? Does it seem to own the meadow and intimidate other bears? He’s probably an older, bigger male. But if it shies away from its fellows, or acts nervous and edgy, it’s probably a young, submissive bear.

4. Scale
One of the arguments for baiting is that hunters can compare the size of a bear to known items, such as the large drums that are often used to distribute bait. But bears can also be judged relative to each other. The bear most frequently misjudged is the solo bear.

5. Anatomical Features
Lastly, judge a bear’s ear size, the length of its legs, and how saggy its belly appears. The ears of large, old boars tend to look small and jut from the sides of his head while a younger bear has pointed ears that appear close together. An older bear looks like he has short, squat legs, because his body is so muscular. And a bear whose belly sags close to the ground is probably an older, well-fed boar.