Are You Staying on Top of Your Coyote Problem?

The Data Don’t Lie. If your answer to this question is “What coyote problem?” you might need to take a... 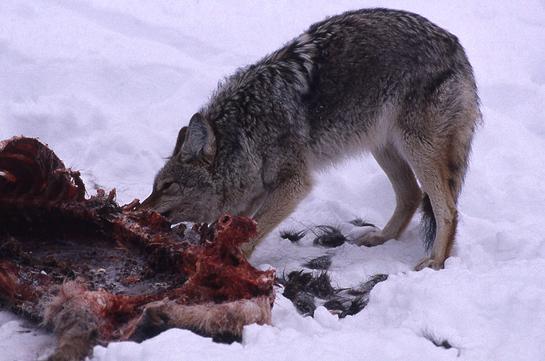 If your answer to this question is “What coyote problem?” you might need to take a second look. Hunters across whitetail country are reporting decreases in deer numbers and some state agencies are beginning to say the same thing. Coyotes are beginning to emerge as the culprit.

Whitetail researchers have begun looking at the impact of coyotes on deer and the results are pretty grim. Coyotes are gobbling up fawns at an alarming rate! In fact, coyote impact on whitetails was the overriding theme of this year’s Quality Deer Management Association’s National Conference.

Much of the coyote research has looked at fawn survival rates (recruitment rates) before and after eliminating predators from a given area. In one Alabama study where deer numbers were reported to be declining, professional trappers removed the predators (mostly coyotes with some bobcats). Fawn survival rates (surviving until fall or recruited into the adult herd at six months old) increased dramatically ( by more than 200 percent) the following year. Another study in Georgia amazingly found that it took 78 does to recruit two fawns in a predator rich area. Once the predators were removed, it took only three does to recruit two fawns into the fall herd.

A South Carolina study looked at fawn mortality a different way. The researchers captured and monitored 60 newborn fawns. Coyotes killed more than 50 percent before fall. Fawns are particularly vulnerable immediately after birth as 66 percent of the kills occurred within the first three weeks of life.

A study conducted in Pennsylvania identified not only coyotes as significant fawn predators but black bears as well. The study also found that fawn predation is higher in big woods environments than in agricultural based areas.

So what does this mean for hunters? Well, doe harvest has always been the tool to control deer herd size. With recruitment rate of about 1.0 fawn per adult, an annual doe take of around 30-33 percent would stabilize a herd. With a recruitment rate of .4 fawns per each doe, no doe harvest is necessary to stabilize herd numbers. If you have a coyote problem, resulting in no fawn recruitment, taking the same number of does as you used to before the predator problem might mean you are reducing your herd numbers without intending to! Here’s how to avoid mismanaging your herd because of coyotes.

Got Coyotes?
If you have whitetails, you probably have coyotes. But how do you know if you have a coyote problem? The best way is to keep your eye on fawn recruitment rate. Each time you observe deer (late season and early fall before hunting season) record the number of does vs. the number of fawns. Camera surveys are excellent tools for this. After you have a stack of observations compute a ratio of does to fawns and set it aside. Do the same for a few years in a row and look for a trend up or down.

Another trick is to keep an eye out for twins if they are common in your area. On my property I have not seen a doe with twins all summer. Past years we have seen plenty. Keep a year to year tally and once again look for trends. You can also begin checking does harvested early in the season for signs of lactation. If they nursed fawns through the summer they should show some evidence of milk production. If your number of “dry” does (does without fawns) is on the increase, fewer fawns are living to join the adult herd in early fall (biologists call this recruitment).

Also, keep your eyes open for coyotes and coyote scat while in the woods. Watch for population changes and keep track of them over time. Of course you should be keeping your ears open for howling as well. Trends will be apparent and you can bet they will be working on the deer.

Yotes Should Change the Way You Hunt
I received a very alarming e-mail this past week reporting wounded deer scavenging by coyotes. Common practice among bowhunters when the weather cool is to leave “gut shot” or poorly hit deer overnight to either die overnight or to recover fully from a superficial wound. The e-mail was from a hunter stating that he had coyotes on the kill 25 minutes after shooting the deer. As the email began to get circulated, a second hunter reported a similar incident.

John Jeanneney, the leading deer recovery expert in the country, has started recommending that bowhunters no longer leave their wounded deer over night in areas with coyote populations. He believes that coyotes have learned all about tracking deer that are wounded by hunters and have become proficient at it. He and his wife Jolanta breed champion blood tracking dachshunds and network with hundreds of tracking dog owners who recover thousands of wounded whitetails each year. They are reporting 50 percent of their next day recoveries in coyote dense areas have been fed upon by coyotes. Following up immediately on hit deer will be a radical change for most bowhunters.

Last year I arrowed a doe opening weekend which left a weak blood trail. I was working my new tracking pup so I called off the search until morning when I could give the young pup a little more help. Morning brought better sign and the pup was doing well until we came upon a fresh pile of coyote scat. A little uncertain and confused he pressed on and located the half eaten doe 30 yards further up the trail. Not a good start to the season for either of us.
**
Kill’em All or Let Nature Take It’s Course?**
To be fair to the coyotes, they are not the only predators taking fawns. Bobcats are very good at scooping up newborns and black bears are especially good at finding fawns in the big woods. Still, coyotes are the number one fawn killers in most places and their numbers are exploding.

By now, if you are like most deer hunters, you are rummaging through the gun safe looking for the right medicine to use on those damn fawn-eating “yotes.” Well not so fast partner. Research shows that to really make a serious dent in the coyote population, you have to almost totally eliminate the coyote population in a given area. Whacking a few won’t make a difference. In fact, killing an alpha female or male can lead to even more coyotes (killing the alpha dog usually scatters the pack, so if you had one pack at first, you could soon have two).

Fact is, it is really tough to trap or hunt a coyote population out. The only folks who can do it with any consistency are professional trappers and most of them expect to be paid for their trouble. Prices of a few hundred dollars per coyote are not uncommon.

So What Do You Do?
For starters you have to acknowledge that the threat is real and begin paying closer attention to your deer herd. Start checking recruitment rates and begin looking for increases in the coyote population. If the coyotes are taking the herd numbers down, you don’t have to compound the problem by shooting does. Cutting back on your doe harvest might be an absolute necessity and by far, is the easiest solution to implement.

A recruitment rate of about .4 will result in herd stabilization. If you want to keep your deer numbers the same, let the coyotes do the harvesting (of does at least). With a recruitment rate of 1.0 you need to remove about 30 percent of the adult does from your herd (keep up the good work). If you have coyotes, all harvest decisions should be made in light of predation (coyotes, bears and bobcats). Just because you have a doe tag doesn’t mean you have to use it.

If you own your property and you like shooting does, you can attack your coyote problem with habitat. Creating fawning areas of super dense cover that is few acres in size will do wonders for fawn survival. The abundance of thick habitat makes it easier for fawns to hide from predators.

We run a big dozer or log skidder over early succession forest land with 3- to 6-inch pole timber and brush in order to crush the brush, a practice that makes terrific fawning and nesting cover. The tipped over trees stay alive for an additional 3 years or so and make it tough for the coyotes to hunt down the fawns. It is the nastiest looking cover you will ever see, but it is too dense for coyotes to systematically hunt out the fawns.

Cutting young 3- to 6-inch trees three quarters of the way through (hinge cutting) and tipping them over one atop the other also creates good cover for fawning and nesting. It is more labor intensive that crushing brush with a dozer, but not everyone has one of these 20-ton beauties out back in the barn.

We have also started planting warm-season native grasses in 2- to 4-acre blocks. They grow very dense and a fawn buried deep in one of these fields is almost scentless as winds seldom penetrate deep enough, in fact they deflect over the field to catch the fawns scent and carry it to the nose of a hungry predator.

Hinge cutting is an excellent practice as is creating dense stands of native grasses. A good timber clear cut with lots of tops left to shelter regenerating trees and brush should provide excellent fawn cover in a few years. The trick in creating cover is to get daylight to the ground.

Another fawn saving strategy is to manage your buck to doe ratio so that most of the does get bred as soon as they come into estrus. This results in a massive fawn drop in the period of a week or two and since fawns are most vulnerable the first month of life, and the coyotes can’t eat them all, many will survive that period of vulnerability.
**
Bottom line**
You may or may not have a problem but you had better keep an eye on it. Coyotes are spreading fast and furious and frankly. There isn’t all that much that can be done about it.

Coyotes are natural predators and are part of nature’s big plan. Exploding and expanding deer numbers and a lack of coyote predators (wolves, fur trappers, dog hunters and varmint shooters) has helped spawn the dramatic increase in coyote populations. Eventually they will eat themselves out of house and home and move on or start dying off. Unfortunately they may leave few if any deer behind.

Most deer managers struggle to keep their deer numbers in check. For them, coyote predation is an easy and natural solution to deer overpopulation. But there is something inside man the “predator” which doesn’t like competition from other predators. Few deer hunters able to see coyotes an asset especially when deer numbers begin to decline. For them the coyote is a mortal enemy.

Before you decide where you land on the coyote hating continuum, and start taking Mother Nature into your own hands, take a hard look at the size of your herd, and whether your herd is being negatively impacted by coyotes. Doing so will allow you to approach the “problem” rationally as a deer manager and hunter.

Note: The author would like to thank the Quality Deer Management Association (QDMA) for most of the statistics cited in this blog.