Kristine Fischer Caught Two 11-Pound Florida Bass in The Same Day. Here’s How She Did It 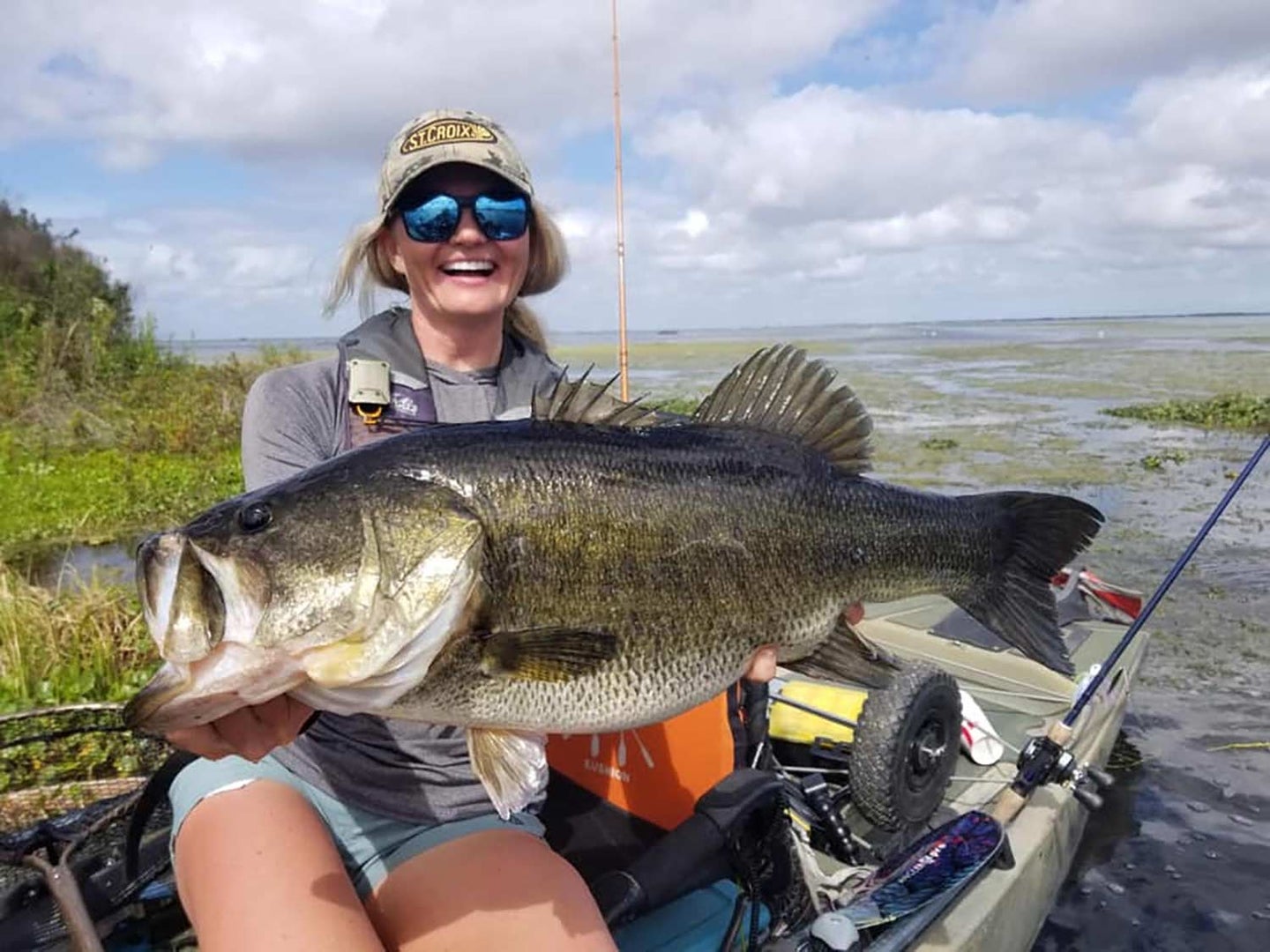 One of the author’s 11-pound bass caught from a kayak in south Florida. Kristine Fischer
SHARE

I sat cross-legged in the backseat of the truck, my face pressed against the glass, eyes drifting over an endless sea of oil derricks dotted across the red dirt of Oklahoma. The long road home after a big bass tournament offers an angler a much-welcomed opportunity to unwind and bask in the high after a successful derby. Or, it can be a very cruel trip if you had a bad week. Your mind fills with all the defeats; all the anguish of mistakes made and opportunities missed.

On this particular November morning every mile up I-35 slogged along as I replayed each step of the tournament in my head. I hadn’t caught a single fish, and was on the edge of a meltdown. I wanted to sell every fishing-related piece of gear I owned, so I’d never have to suffer this kind of humiliation again.

I often think back on that tournament, because it shaped me into the angler I am today. It was my first national-level event after having a successful year fishing the local circuit. I strolled down to Lake Fork, Texas, full of confidence, only to be served a big slice of humble pie by seasoned pros who had made bass fishing their livelihood.

After the grieving period, a fire sparked inside me. I was fueled by both determination and passion, and wanted to be successful in this sport. I knew I would have to spend more time on the water. I also knew there would be a price to pay. To be successful at anything you have to make sacrifices.

I traveled all over the country, fishing national tournaments against the very best in our sport, on bodies of water I had only read about in Bassmaster magazine. I scoured over Google Earth and Navionics months in advance, making note of every single subtlety in the lakes I was fishing. I’d go back and look at old maps and locate brush piles, laydowns, changes in bank composition, old ponds, and ditches. Back at camp, I’d flip a jig into a cup until my forearms hurt. No one was going to out-prepare me.

I consistently cashed in my first year kayak fishing national trials, but 2019 would be my break-through season with three wins and numerous top five and top 10 finishes. It was the result of hard work and perseverance, and while that time spent on the water honing my craft made me a better tournament angler, it also led to one of the most remarkable mornings I’ve ever had in my career.

The Biggest Bass of My Life

I had just wrapped up a tournament on Lake Seminole in early February and had a two-week break before the next stop. So, I headed to south Florida, a region I had only fished a handful of times, with a friend after hearing rumors of good bass fishing. We had three days and a new moon, so it set up perfect before we needed to get to Texas for the next tournament.

It was hot and muggy while we rigged chatter baits, flippin’ jigs, and creature baits in the parking lot of the public boat launch. There were trucks parked everywhere—many anglers must have heard the same rumors we had. The lakes in south Florida we fished were relatively shallow, and feature a series of ditches and canals with an abundance of vegetation. Early February meant bass were in all stages of the spawn, and I noted several empty beds as I stood and slowly paddled my kayak back to a small bay. The midday bite was tough, as predicted, but the last half hour of light yielded several largemouths, including a six-pounder to finish off the evening.

The next day we decided to fish another lake close by and were relieved to find few trucks in the parking lot. This lake was much larger, so I spent a couple hours on Google Earth the night before scanning for potential areas to key in on. Because I had seen so many empty beds, I decided to try and target fish in transition areas. This led me to focus on an area where a roadbed intersected a canal—a highway that also looked to have a little more water depth.

That morning was still as my kayak cut through the hydrilla and into a canal. The depth dropped to around 10 feet and the amount of bottom vegetation increased significantly. I scanned the roadbed and saw a school of bass on my side scan. I repositioned the kayak, grabbed my 72HM Legend glass rod and hurled a jackhammer toward the school, letting it slowly fall before ripping it up and casting again. After a few rips, I hooked a 2-pounder, and then a 4, another 2, and several others before putting down the bladed jig and reaching for a Texas-rigged 4-inch creature bait that consisted of a 4/0 EWG hook, and 1/2-ounce pegged tungsten bullet weight.

I first experimented with this particular technique during a tournament on Lake Chickamauga. I had found a channel swing in about 9 feet of water, loaded with sparse grass and big fish. I tried several different things before swimming this bait through heavy cover, and killing it as soon as I felt it come out of the grass. I was able to get down in the grass, cover water, and fish without getting hung up because of the weedless T rig. I ended up besting a field of 126 anglers, and continued to keep that technique in regular rotation when fishing around deep grass.

Since this Florida lake had some similarities to Chickamauga, I reached for my confidence bait and cast it parallel to the roadbed. I let the bait hit the bottom before starting a slow retrieve. I pulsated it through the first patch of grass, allowing the bait to fall as soon as I felt it break free. It’s important to maintain contact with your bait. Many times these big fish hit it on the fall. As I worked the cover, I started catching a few small fish … until 9:30 a.m.

I was slowly swimming the creature bait back, keeping it just off the bottom when I felt a fish pick it up. I tried to set the hook, but missed the fish. So I started reeling in fast, then killed it, then reeled in more, stopped, reeled in more, and for a split second, I couldn’t feel my weight. So I instinctively set the hook hard and my rod stopped about halfway up, despite the excessive force I put into it.

“GIANT!” I screamed. I didn’t need to see this fish to know that it was easily the best bass I’d hooked into in a long time. The drag on my line was cinched down, but this fish was still managing to pull, bull-dogging in such a way that I started to question the integrity of my 17-pound fluorocarbon. The kayak shifted side-to-side at the mercy of the fish on the the end of my line. All I could do at this point was hang on.

My nerves were on high alert as I began to apply downward pressure to the rod, trying to keep the bass from breaking free. I saw a flash of color a few inches under the surface and my heart nearly leapt out of my chest. My personal best largemouth to that point was a 23.5-inch 7.5-pounder out of Lake Fork, and I knew this fish would shatter that.

The next few moments were crucial. I needed to ensure I kept the pressure on and had the right amount of line out before reaching for my net and boating this bass. As the fish began to breach again, it revealed a basketball-sized mouth and two golf ball-sized eyes. I was coming unglued and had to get his bass in my kayak.

Read Next: 12 Ways to Hunt Down Big Bass

The fish dodged the net on the first attempt, I made one quick sweep, and finally netted her. As she lay in the net, a wave of emotions came over me. I was like a teenage girl front row at her favorite boy-band concert. With both arms shaking, I reached into the net and lifted out what would end up being a short-lived personal best 25.75-inch, 11.65-pound of a true Florida bass.

After a few quick photos and measurements, I safely released her back into the water so she could go on to make another angler’s dream come true. I was on Cloud 9 as she swam off, not knowing my day would get better. Using my side scan on definitive grass lines, I broke that personal best with a 26-inch 11.8-pound bass just a few hours later on the same bait.

It was a culmination of utilizing both what I had learned in all the years of chasing trophy bass, and the confidence I gained on the tournament trails. My best five fish that day were just shy of 45 pounds, a feat that’s only reached by countless hours of preparation and spending too much time on the water.

That day helped solidify my decision to keep pushing forward after failing so miserably. As an angler, you’ll experience your fair share of disappointment, whether you fish on a national tour or a local derby. Just remember, perseverance is always rewarded.