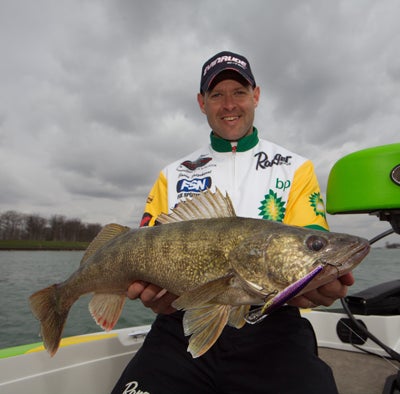 PRO-FILE Jason Przekurat Qualifications: Przekurat is the only two-time Angler of the Year on the FLW Walleye Tour. He has finished in the top 10 in AOY points six out of the last nine seasons, and leads the league in top-10 finishes (9) and consecutive top-10 finishes (3). On Boat Traffic: "It gets nutty out there, but offshore fish are used to it. If you can figure out where they're at and what they want, you'll do just fine." Killer Tactic: While most people are working the shallows for walleyes during August, the FLW Walleye Tour's only two-time Angler of the Year, Jason Przekurat, is hitting offshore structure. "People struggle so much in August because they're fishing shoreline structure. They need to venture offshore. What worked in June isn't going to work in August," says Przekurat. "I like rock piles and big flats in open water basins." To get summer walleyes to bite, the Wisconsin pro uses the often-overlooked worm harness. "Trolling with a crawler harness is by far the best August technique I use, but most people just don't know how to use this bait," says Przekurat. "If you look at all the big weights coming out of the tourneys, they're all caught on crawler harnesses." Przekurat uses a No. 5 or No. 6 gold Colorado blade with a No. 2 single octopus hook in the front and a No. 10 treble hook in back. While a gold blade is a must-have, bring a variety of colors and let the fish tell you what flavor they want and at what speed it should move- which for harnesses is somewhere between .9 and 1.7 mph. Locate walleyes by keying on the offshore structure and marking suspended fish on your electronics. Then simply keep dragging that crawler harness back and forth in front of the fish. "The biggest thing is finding out where they are in the water column," says Przekurat. "Once you figure out where they are, you just adjust your inline weights, bottom bouncers or snap-weight system to get the harness down." Przekurat keeps his weighting system simple: For every 10 feet of water depth, he adds an ounce of weight, up to 3 ounces. "Because of the thermocline, you don't have to go much deeper than 30 feet," he says. (Gotta have 'em? Enter to win these lures here!). Outdoor Life Online Editor
SHARE