Smallies are fueling up for the fall, and now is the right time to get on the bite 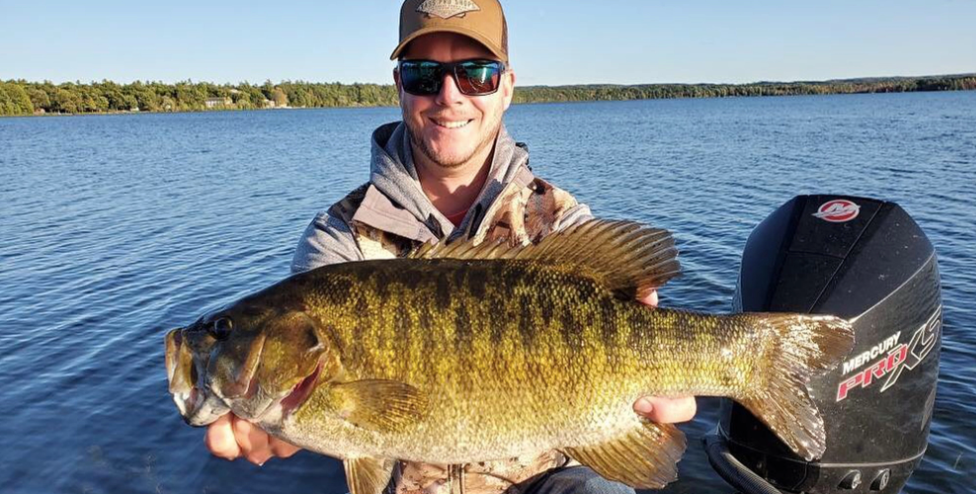 This weekend, I plucked a pair of 4-pound smallmouth out from directly underneath the boat in a 5-minute flurry that put me at 50 smallmouth landed over 4 pounds this summer. About a dozen of those topped five pounds, and three went over six, including my personal best of 7.4 pounds.

I’m blessed to live in a part of the country where smallmouth aren’t terribly hard to find. I’m within two hours of two of the greatest smallmouth factories on this planet: Lake St. Clair and Lake Erie, not to mention some lesser-known lakes located in northern Michigan that can produce truly giant brown bass. A few years back, my son caught an absolute beast of a smallmouth that went well over 8 pounds, just a half-pound shy of the state record. Catching a giant smallmouth isn’t exactly an art form, but there is definitely a system to it. Here are the tactics I use to hook more smallies.

1. Fish Where They Live

The old deer-hunting mantra about not being able to kill a big buck where big bucks don’t exist applies to fishing as well. If you’re looking to catch a giant smallmouth, you have to fish where they are. That happens in one of two ways: Lakes that are large enough that bass can get old (and thus big) even if the lake sees extensive fishing pressure. Smaller lakes with heavy fishing pressure simply haven’t proven capable of producing trophy-caliber fish on a regular basis in my experience. Which, of course, leads to the second type of lake capable of delivering giant bass: Fertile smaller fisheries with minimal fishing pressure. Like with whitetails, age is the key. Big lakes and/or limited pressure makes for big, old bass.

Like all other species, fish live where their food lives. But smallmouth, perhaps even more so than largemouth, allow the presence of forage to dictate where they hang out. If you’re fishing a prime largemouth lake, odds are pretty good that you’ll find them in areas of obvious, high-quality cover. That, in my experience, is not the case with smallmouth. My home lake of St. Clair is a prime example of this. There are literally thousands of acres that can be jam-loaded with big smallmouth. But they can be on the bite one day, and off the next. I’ve not had that kind of here/not here experience chasing largemouth. But with smallmouth, it’s maddeningly commonplace. Over time, I’ve learned that unless I’m seeing baitfish on my electronics or feeling that tap-tap-tap attack of small fish on my lures, I don’t bother fishing the area no matter how ideal the cover looks. Without forage, the bass will not be there.

Read Next: Buried In Tackle

Of all the oversized bass I’ve caught this summer (and in years past), well over 90 percent have been hooked on baits that were close to the bottom and moving slowly. I’m a tube/dropshot angler but will throw crankbaits and other reaction-style lures when conditions dictate. I have caught some good fish on them but, by and large, my big fish are going to come when I slow down, pay attention to my electronics and position the lure in an ideal location and leave it there. As fat and rolly as some of these northern smallmouth are, I often wonder if they aren’t inclined to simply relax, position themselves where food is easy to nab, and wait for easy opportunities. I don’t think color matters a great deal so long as you use a color that’s somewhat natural. Yes, smallmouth do seem to favor bright pinks and yellows on occasion but, for the most part, I’m going to stick with lure colors that mimic the forage available.

4. Fish at the Right Time

This is where I likely differ from a lot of big-bass gurus. My preferred timeframe for catching big bass is in the heat of summer. Fall is a great time, no doubt. The fish are active, aggressive and fueling for winter. But, they can also be a bit tougher to locate and the weather can be less desirable (if you’re like me and dislike cold, windy days).

The ideal sweet spot is right now. Northern lakes are still very much fishing in a summer pattern but the bass are feeling the need to begin their fall fuel up. This is primarily an offshore, deep-water game. This isn’t just a single-giant effort either. That’s what’s so great about this time of the year. When I catch a 4-pound smallmouth now, I expect to catch more in the same area as the fish are likely schooled up and those schools typically group by size. Finding these groups takes time. You have to cover a lot of area and understand that the fish roam readily. But once a school is located, landing multiple trophy-class fish in a hurry is not unusual.