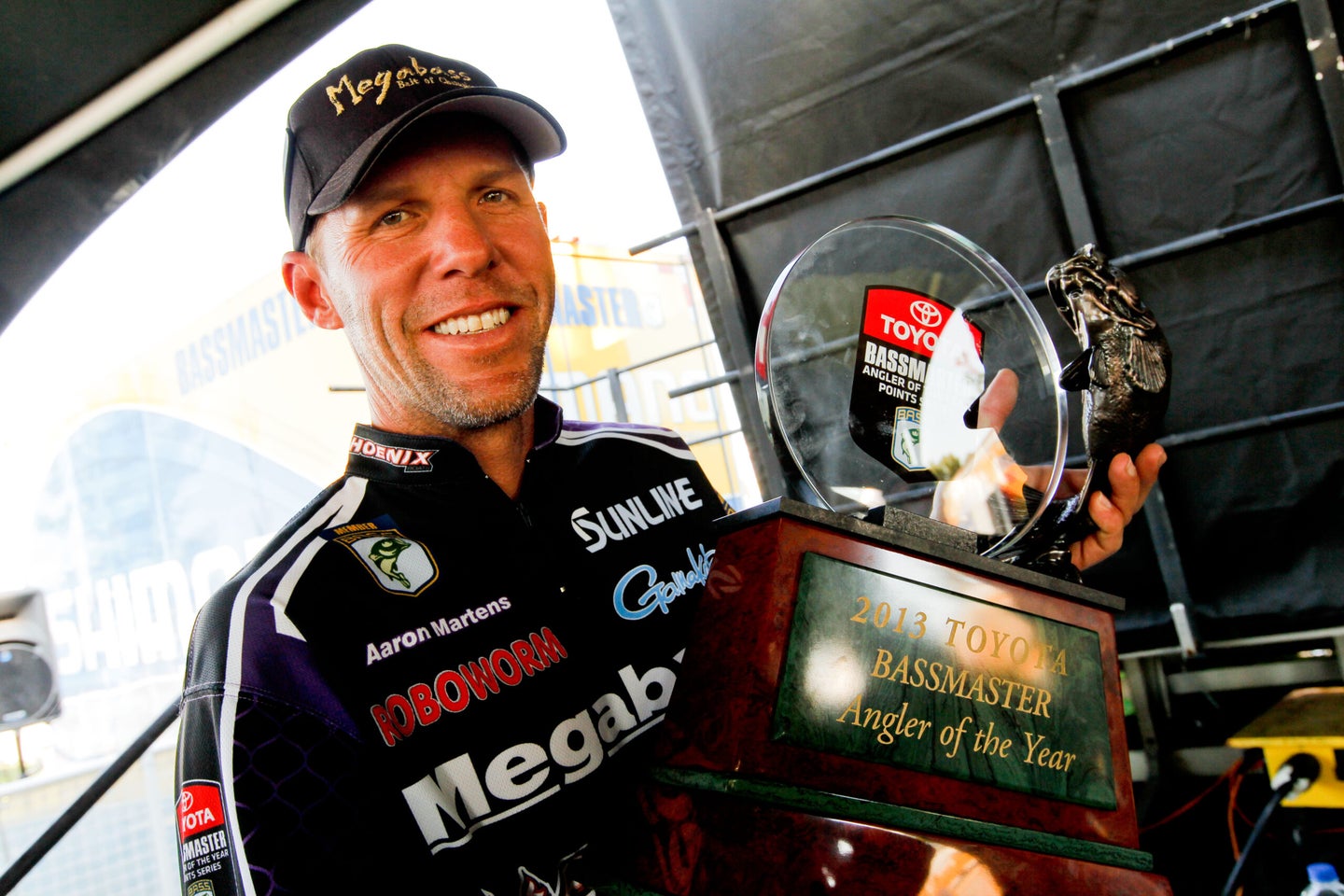 Aaron Martens, a trend-setting professional angler, has passed away at 49. Bassmaster
SHARE

Professional angler Aaron Martens of Alabama, winner of three Bassmaster Angler of the Year titles and three WON Bass U.S. Open championships, died Nov. 4 after a 19-month fight with brain cancer. He was 49.

Martens burst onto the professional fishing scene in his home state of California in 1999, winning a Bassmaster tournament on Lake Oroville. A regular on the West Coast bass scene, he planted his flag with the professional world with finesse tactics. Using light line and hand-poured worms and soft plastics, Martens targeted spotted and largemouth bass as deep as 100 feet or more in the vast Golden State reservoirs. Those tactics were foreign to the east coast bass scene, but the pros and recreational anglers soon learned they would need to adapt.

Martens was runner-up four times in the Bassmaster Classic, including three times between 2002 to 2005 to Jay Yelas, Takahiro Omori, and Kevin VanDam. He also was second in 2011 in New Orleans, finishing behind VanDam. Along with his WON Bass U.S. Open titles in 2004, 2005 and 2011, Martens won three Bassmaster Angler of the Year titles. Only five pros have won three or more. Martens, Bill Dance and Mark Davis of Arkansas won three, trailing VanDam with seven and Roland Martin with nine.

After suffering seizures while fishing with a friend, Martens was diagnosed in spring 2020 with glioblastoma, an aggressive form of brain cancer. He underwent two surgeries in Birmingham, Alabama, followed by treatment. Martens was able to return to competitive fishing with the Major League Fishing tour, fishing in five tournaments in 2021. His final tournament was an MFL event in August.

Martens is survived by his wife, Lesley, daughter Jordan and son Spencer, and his mother, Carol. Lesley Martens confirmed his death via Facebook post Thursday night:

Jesus tells us in Matthew 5:14-16 “You are the light of the world… let your light shine before others, so that they may see your good works and give glory to your Father who is in heaven.” And what a wonderful light he was. Aaron passed after a 19-month battle with Glioblastoma. We are heartbroken beyond words. I can’t imagine life without him but we take solace in knowing that he’s walked into glory – the only glory that truly matters. Thank you to everyone that supported us during the past 19 months through texts, posts, phone calls, visits, and fundraisers. Your kindness, prayers, and love encouraged us every day and Aaron and I wholeheartedly felt your love.

Martens fished professionally for 23 seasons. He was a mainstay on the Bassmaster and FLW Tour circuits, immediately making an impact among a surge of young pros including VanDam, Yelas, Iaconelli, and fellow Californian Skeet Reese. Martens’ widespread success on the West Coast scene put him on the deck against stalwarts and pros including Ish Monroe, Dean Rojas, John Murray, Bryan Velvick, and others.. Martens could adapt to conditions, but honed his skills on finesse tactics on deep, clear lakes such as Shasta, Oroville, Clear, Beryessa, Havasu, Mead, and others. But he wasn’t averse to fishing vegetation with heavier tackle, such as on the California Delta, when he needed to do so.

“He was one of the best bros ever,” said Monroe, who competed against Martens for more than two decades.

When Martens moved cross-country to pursue the pro tours, Martens put those same light-line, small bait dropshot, and finesse tactics to use on East Coast rivers and lakes. With his home base near Birmingham, Martens could further refine those skills on the fertile Coosa, Tallapoosa, and Tennessee rivers in Alabama for spotted, largemouth, and smallmouth bass. He also became more acquainted to the varied vegetation, changes in weather and conditions, flows from the river hydroelectric dams, and other factors.

Putting all that together, Martens assaulted the FLW and Bassmaster trails from Florida to the Midwest with vigor and intensity. He also did it with a smile on his face. While the competitive fires burned hot, Martens embraced life with joy and sought the silver linings instead of lamenting dark clouds. He loved visiting with anglers of all ages, and whether he was competing for bragging rights with a writer at a media event or on the final day of a championship, he went full bore to figure out the fish and try to win.

“I might get torn up for saying this, but I truly believe that if you took away all the info-sharing and all the [fish-finding] electronics and it was just man vs. fish, he was the best there’s ever been,” longtime pro and industry veteran Gary Dobyns told BassFan. “He was an unbelievable fisherman and he just loved it—he could fish seven days a week, 365 days a year and never get tired of it. He was just amazing and I can’t believe this has happened.”

Martens qualified for 20 Classics, won six Bassmaster Elite titles from 2007 to 2017, nine Bassmaster titles in total, and claimed the 2015 Bassmaster Angler of the Year title by an astonishing 112 points over the runner-up. He also won two FLW Tour events as well as a Major League Fishing tournament. Fishing was his career, but his faith in God and love of family was his life. In a Major League Fishing promo video, Martens described growing up being outdoors camping and fishing, spending summer days at a state park roaming with a rod and lures, and catching his first bass — sight-fishing for a two-pounder on a bed, using a crappie jig.

“He went for it … lo and behold, he ate it. It was a really good fish. I think from that point on, watching that fish look at that bait, and go around it and all of a sudden eating it, watching the fish jumping and fighting, I think from that point I was really hooked on bass fishing. That was my first real, official bass. I can’t remember catching one before that. I was about 12 years old.

“Without that happening, who knows? I might be working for a living, or contracting or something else out there.”

Kevin Van Dam of Michigan battled on the water with Martens for almost 25 years. They became close discussing fishing tactics and strategies, and even moreso personally as their relationship evolved. Van Dam won four Bassmaster Classic championships, with Martens second in two of those, and they were among the pros who helped start Major League Fishing in 2018.

Van Dam told Outdoor Life that he and Martens talked frequently and became closer in the last 18 months.

“Hate it, hate it. It’s just one of those things we have to face, unfortunately. We had a lot of close battles. Classics, he had a lot of close calls there. That’s how I got to know Aaron as a competitor, when we got to talk. He fascinated me from the start, from his unique, unorthodox approach and process. The other thing I loved about Aaron that was he was so detailed. I don’t know if I’d call it an advantage, but I am meticulous about my tackle. But no one was more meticulous than Aaron. He would be up to midnight or later to be ready. Everything was done, and that was his process to be ready for the next day.

“You look at how he organized his boat, his system … we all get very set in our ways, but he really was set in his ways. He used all the same Plano Stowaways. A year ago, Aaron put in an order for a ridiculous number of 3700 Stowaways. I tried to tell him about the Edge boxes, but he said ‘Nope, the Stowaway is what I use.’ It was what kept him all lined out. Disrupt that, and it disrupted his mindset. It was Aaron, but that’s what made him special.

“He was one of the greatest instinctual fishermen of our era, better than me. When Aaron started to put the puzzle together, watch out. But if it started going backward, Aaron could easily back himself out of it, too, by overthinking things. We talked about that, too.

“Aside from the fishing what was really special, though, is what a unique person he was. Aaron was innocent, loving, unassuming, always positive, always smiling. That’s the Aaron I know and love, and that’s what changed me. We had a different relationship. He probably had this with other people, too. We talked about fishing but we talked about a lot of other things, and in the last year we talked more about other things than fishing. His faith in God … through this he never blamed anyone else, never felt sorry for anything. He’d say, ‘I believe in God, He has a plan and I’m going to fight this to the end.’ His faith was calming, about how he was going to fight this. It shocked me, to be honest, but it also was comforting.

“He would do anything for anybody, whether you were on the water or not. He would help anybody. That was his thing. ‘Hey man, you should be throwing this bait’ and he’d give you some of them, or ‘Hey, you should tip the claws with orange dye to catch more.’ That’s how he was.

“But the one thing was that Aaron was never afraid to tell you he loved you. ‘Love you, man,’ or ‘Love you, bro.’ I don’t know how many times I’ve heard that. Guys don’t do that that often. That’s what I learned from him, and appreciate more than anything else, was that relationship. I loved to talk with him about fishing because he’s fascinating, and we’re different but similar in styles, and we always had great conversations about life and other things. That’s what means more.”