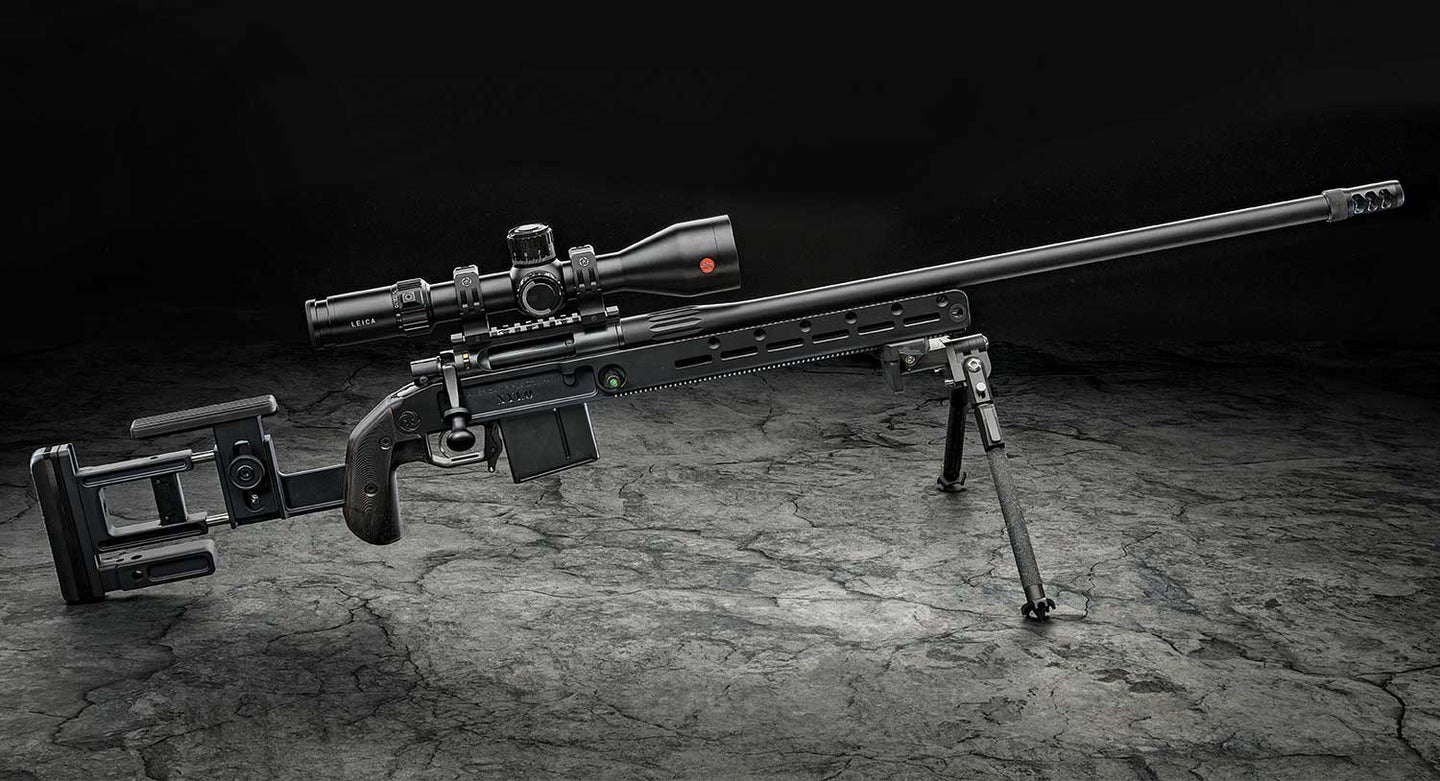 There’s a lot of ground to cover with this rifle, so I’m going to skip the introductory chitchat and get right to it.

At $2,499 the Nucleus Gen2 is priced to qualify for the Precision Rifle Series production class. As is typical of rifles of this type, it comes stripped down, meaning that it doesn’t ship with a magazine, a muzzle device, or other accessories so that the manufacturer can put as much as possible into the rifle itself while staying under the $2,500 threshold.

I shot the rifle with a muzzle brake attached since production-class rules allow for that addition and 99 percent of shooters will screw on either a brake or a suppressor for matches.

This rifle is built around the second generation of the American Rifle Company’s Nucleus. It’s a fascinating action that reflects ARC founder Ted Karagias’ outside-­of-the-box engineering.

It’s a three-lug system with a removable bolt head that allows the shooter to swap barrels and calibers if desired. (ARC offers bolt heads in numerous sizes to accommodate cartridges from .223 Rem. to .300 Win. Mag.) The bolt can be taken apart by hand for field stripping and bolt head exchange. No tools are required, even if you need to replace the claw extractor.

The lugs themselves have a toroidal shape, meaning they are curved so that a high point on the lug is what butts against the inside of the chamber of the barrel. Think of those three points as the legs on a sturdy tripod. It’s an easy way to ensure that the lugs rest evenly within the chamber, which helps with accuracy.

Small slots machined into the lugs ride along three rails cut inside the receiver to reduce binding. When this is coupled with how the action is engineered to cock, you end up with one of the smoothest three-lug actions on the market. The bolt throw is silky and consistent through its 80-­degree arc of travel, offering plenty of clearance for even the largest precision riflescopes.

The bolt and bolt handle are machined from a single piece of steel, eliminating a potential failure point. The handle is threaded and comes with ARC’s dumbbell-shaped bolt knob. The knob’s generous contours aid with swift and sure bolt manipulation.

The action is topped with a 20 MOA Picatinny rail that slides into a tapered slot on the top of the receiver to create a strong, precise connection.

The rifle is built on ARC’s Xylo chassis. The most charming feature on the stock is the wood grip—yes, actual wood—which is what xylo means in Greek. Prior to this, I would have bet serious money that we’d never see wood on the stock of a PRS-type rifle.

The grip is well shaped and provides good control over the rifle’s TriggerTech Diamond trigger. The slanted rear portion of the grip also serves as a comfortable rest place for the shooter’s thumb.

Along the underside of the chassis’ boxy fore-end is an integral ARCA rail, the 11⁄2-inch-wide dovetail that has become a default feature on most chassis rifles built for practical steel field matches. The rail is used to clip the rifle into tripods and to attach bipods and specially configured shooting bags and supports to the stock. There are also ample mounting points for weights along the fore-end so you can fine-tune the rifle’s heft and balance.

I didn’t have any of these add-on weights for my evaluation, but would have liked to attach an extra pound or two to make the rifle more nose-heavy. (The extra weight acts as a counterbalance to the natural tendency of the rifle barrel to jump up under recoil.)

Despite this, the rifle handled deftly off barricades, concrete blocks, logs, and other obstacles during my evaluation.

The 10-round magazine I used was designed by ARC as well. It functions like an AICS magazine (double stack narrowing to a single round feeding from the center of the magazine), but is more compact (3.55 inches in height versus AICS’s 4.81 inches, measured from the base plate to the top of the feed lips). This improves the ability of the rifle to navigate barricades and shoot off uneven surfaces. The magazine is easy to load and functioned flawlessly during my testing, feeding the seven different types of factory ammo I shot without any problems.

Read Next: The Gun Test: 24 Best New Rifles and Shotguns of the Year

The overall accuracy of the rifle was excellent. On average, it grouped Hornady’s 108-grain ELD-M ammo at .506 inch and Federal’s 107-grain Sierra MatchKing at .607 inch—both of which are good enough to compete with. In fact, the largest 5-shot group I recorded with more than 150 rounds through the rifle was just over 1 inch—with what looked to be a fluke flier.

I have no doubt that a handloader would have no difficulty maintaining a sub-1⁄2-MOA average with this interesting and innovative platform that’s competition-­ready out of the box.