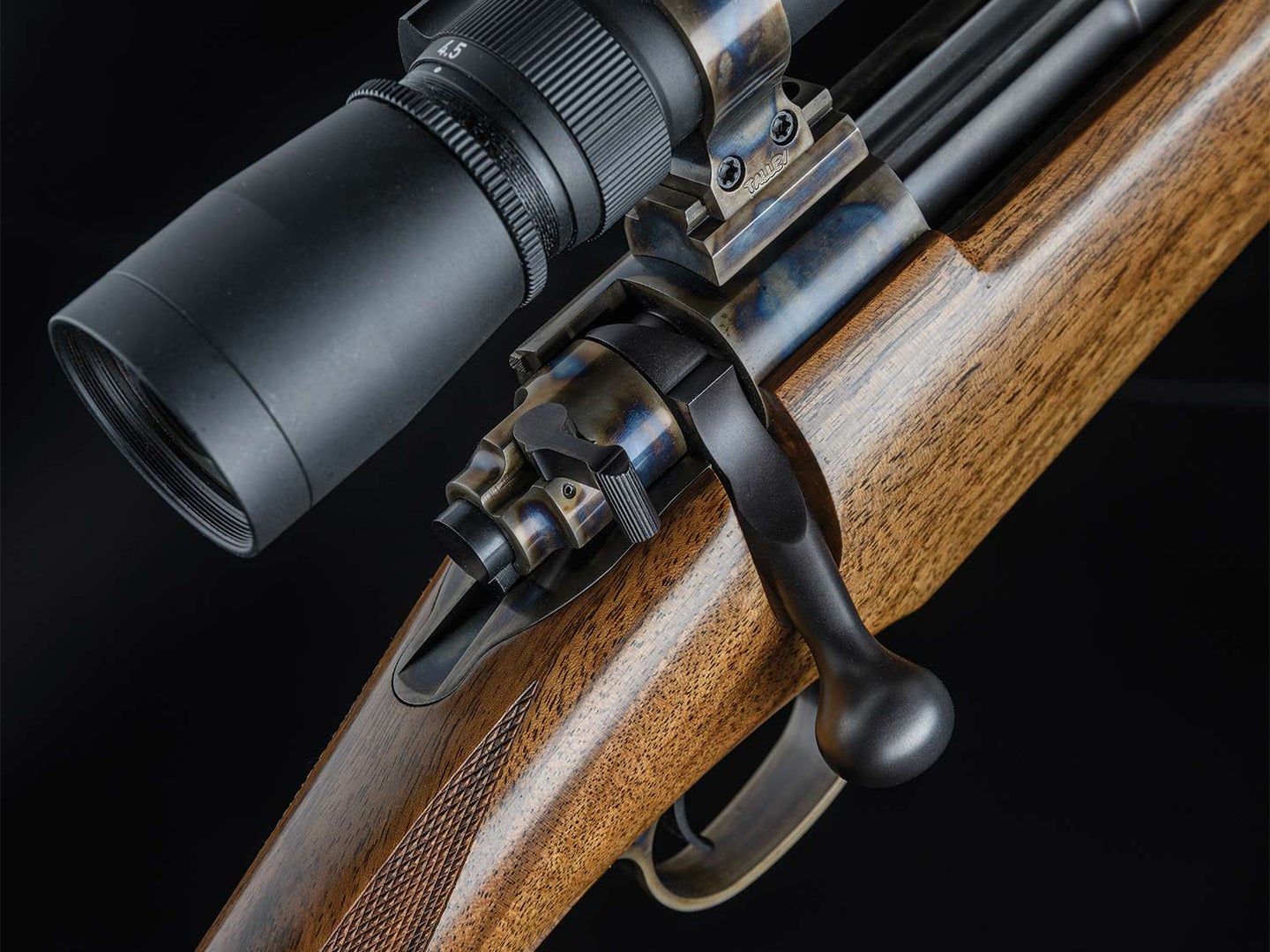 A close look at the three-position safety and the color-case hardening on the metalwork on this Dakota Model 76. Bill Buckley
SHARE

What we think of as a custom gun today is vastly different than it was a generation or two ago. Though we live in a golden age of rifle accuracy and performance, unequaled in the history of firearms, the old-school skills that defined the custom gunmaker’s craft have become scarce.

There are many reasons for this. Take synthetic stocks, for example. Just 25 years ago, the idea of putting a synthetic stock on a fine rifle would have gone over like a food fight at a black-tie dinner. Plastic stocks, with few exceptions, belonged on cheap guns, and that was that.

But as the strength, durability, materials, and aesthetics of those stocks improved, they came to reign supreme on guns at all price points. And so, the demand for fine, traditional stockmaking—with the sanding, filing, hand-checkering, hand-rubbed oil finish, and everything else it entails—has practically evaporated.

The quality of CNC machines, which can churn out dozens of actions and other parts daily while maintaining tolerances within a fraction of a thousandth of an inch, has also changed the equation. The need to blueprint and tune an action for peak performance and to file metal parts for a perfect fit are no longer required.

The majority of today’s custom gunmakers source the various components (the barrel, stock, action, trigger, and so forth), screw them together, bed the action, and, voilà, produce a gun that shoots better than anything your grandfather ever dreamed of. As nice as these guns are, however—and I own and have built many of them myself—they don’t have the same soul as a true custom arm fashioned by hand.

But one place where it is still possible to get a traditional bespoke gun, one that would have gotten the nod of approval from Jack O’Connor and his discriminating peers, is Dakota Arms. Dakota is part of the Remington Custom Shop, based in Sturgis, South Dakota.

I’d longed for a Dakota rifle for many years but could never justify ordering one, at least not until I managed to draw a Shiras moose tag in Utah (see “The Long Shot,” p. 58). I figured a once-in-a-lifetime tag deserved a rifle equal to the moment, so the day after I learned that I had drawn the tag, I placed a call to have them build the rifle of my dreams.

One of a Kind

Dakota has a number of templates you can pick from when ordering a rifle, but like the pirate’s code, they’re more like guidelines than hard-and-fast rules. You can order off the menu, so to speak, which is what I did. (Prices for a Model 76 start at around $6,295 and go up from there, depending on what you specify.)

I wanted the rifle chambered in 6.5 PRC, which would make this rifle the first Dakota ever chambered in that round. Because of that, the lightest barrel profile I could go with was on their Classic model. But I really fancied the lines of their Alpine, with its graceful Schnabel fore-end, so I asked them to stock the gun in that style.

Next I picked my walnut blank, which was the most excruciating step in the process: Each sample of the dozens I considered was more gorgeous than the last. After I specified all the other details, like color-case hardened metalwork and inletted swivel studs, Dakota’s master craftsmen went to work.

Kyle Coshow, who’s been with Dakota for 11 years, oversaw the build and did much of the work himself. The attention to detail on the outside of the rifle is obvious—flawless hand-checkering, inletting so exact that the stock looks like it grew out of the barrel and action, screw heads timed so their slots are all in line with the bore—but the internals are crafted with the same precision.

“We hand-fit the extractor and ­ejector to get the timing just right,” Coshow says, “and cycle the action with ammunition 200 to 300 times to make sure ­everything’s correct.”

Dakota’s repeating action is the Model 76, which blends elements from the pre-’64 Model 70s and the Mauser. It is a controlled-round feed system, with the distinctive long claw extractor that latches on to the rim of the cartridge before it pops free of the magazine feed lips, ensuring that the round slides into the chamber without fail.

It has a three-position safety mounted on the bolt shroud and an open-design two-piece trigger, which is favored for its reliability. These three features—the extractor, trigger, and safety—have defined the qualities of a proper hunting rifle for generations, and the arguments in favor of each are still valid today.

One of the most elegant features on the Model 76 is the bolt release, which is a flush-mounted lever that practically disappears into the receiver in the closed position, enhancing the action’s smooth, clean look.

Next to the deeply figured walnut stock, the rifle’s most eye-catching element is the color-case hardening on the ­action and the Talley mounts and rings. To achieve that alchemy, the parts are packed in a cylinder filled with bone and charcoal—the specific composition is kept secret—and heated to more than 1,000 degrees in a furnace. The pieces soak in that mixture for a while (the ­exact duration is another closely guarded tidbit) and then are dunked into water, which sets the oxidized swirls of color in place.

The final product is a beautifully functional work of art. All Dakotas have a sub-MOA accuracy guarantee. Mine has no trouble shooting under an inch with factory loads, and prints handloaded Berger 156-grain Elite Hunters in ragged single holes at 100 yards.

While accuracy off the bench is never a bad thing, the rifle really shines when you’re shooting from field positions. The action cycles with silky precision, and depending on how aggressively you run the bolt, the mechanical ejector will either flop the brass gently into your hand or kick it out with enough force to clear Fenway’s Green Monster.

With its Leupold 3Xi 4–14×40, the rifle weighs 9 pounds 1 ounce. This is perfect for an all-purpose hunting rifle, according to O’Connor—and who am I to argue with him?

The balance point is on the forward edge of the hinged floorplate, right where it should be, which settles the weight evenly between the hands and gives the rifle a lively feeling when shouldered.

And for those times when the rifle isn’t being shot—which is to say, the vast majority of its life—it is beyond lovely to look at. Part of the way I justified the investment was by picturing my grandchildren or some other yet-to-be-born descendant hunting with it in the hazy future. But an even better outcome would be to know that the custom gunmaker’s craft will survive for another 100 years, and that my progeny will be able to order their own firearm that embodies this noble tradition should the spirit move them.