An accurate, reliable, and lightweight rimfire rifle in .22 LR 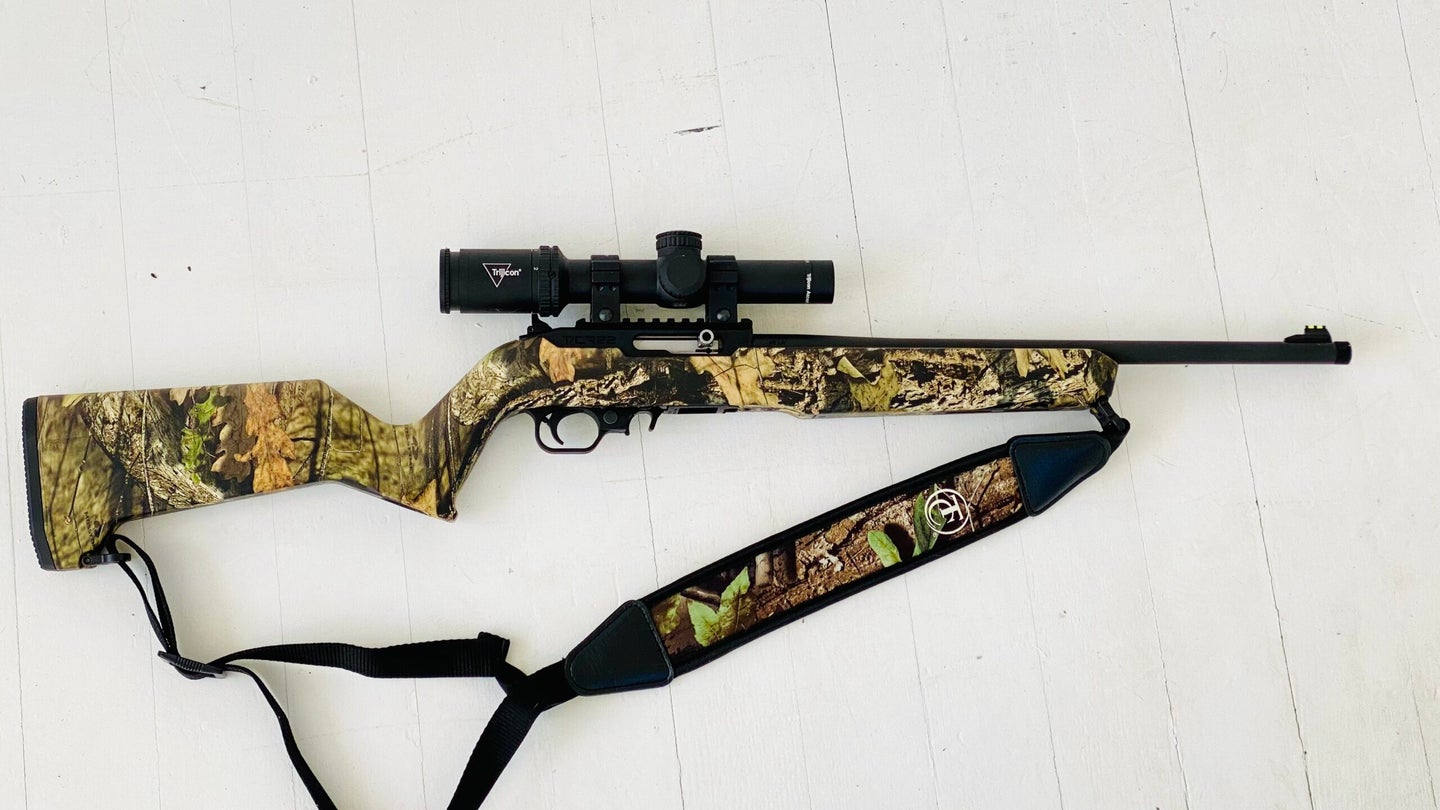 The Thompson Center T/CR22 is a great .22 rimfire for the squirrel woods. Brian McCombie
SHARE

Mention Thompson/Center Arms to hunters and gun people, and they will likely comment on one of the many T/C Encore centerfire and muzzleloader models which have made such a positive impact on the hunting and shooting world. But Thompson/Center also manufacturers a really nice little .22 rifle that hasn’t received much attention, the T/CR22.

Last fall I headed to East Texas to hunt some Lone Star squirrels, among other critters. So, I requested and received a T/CR22 in large part because I was hunting with the people from AB Suppressor, using their Little Bird rimfire suppressor, and the T/CR22 came with a threaded muzzle. I liked the Mossy Oak Break-Up Country camouflage finish, too, on the composite stock. (It is also available in four other finishes and can even be had with a hardwood stock.)

The T/CR22 features a green fiber optic front sight and adjustable rear peep sight, and while they both worked well in my initial shooting, I knew the trees in East Texas were still going to be fully leafed out. An optic would be a big help. I mounted a Trijicon Ascent 1-4×24 second focal plane scope onto the rifle’s Picatinny rail and the T/CR22 proved to be a reliable squirrel killer.

Lightweight at less than 4.5-pounds, the T/CR22 features a 10-round rotary magazine that worked very well, once I got used to loading it (see below). Accuracy with and without the Little Bird Suppressor was right at 1 Squirrel Head MOA at 25 yards, .75 inch.

The semi-auto T/CR22 obviously owes much in looks and design to the Ruger 10/22. It employs a simple blowback design. Made of 6061 aluminum, the receiver sports an integral Picatinny rail for mounting optics, while the stainless-steel bolt is equipped with an oversized handle that helps to easily work the bolt.

Back home I decided to give the rifle a more thorough try out, and spent several hours at my home range using three varieties of .22LR ammunition in the T/CR22: CCI’s Mini-Mag Varmint loaded with a 40-grain Segmented Hollow Point bullet; Federal Premium’s Auto Match firing a 40-grain solid bullet; and the Wildcat SuperSpeed and it’s copper-plated 40-grain hollow point, from Winchester Ammunition.

At 50 yards and shooting from a rest, the T/CR22’s accuracy was impressive. Any time I took my time shooting—which isn’t easy for me when using a semi-automatic!—I could and did drill five shot groups of 1.0-inches or less. Less included a .95-inch group with the CCI , a .98-incher with the Federal, and the Winchester Wildcat at .85-inches.

Shooting faster, groups grew on average to 1.3-inches for all three brands of ammunition.

The trigger pull on my T/CR22, as measured on a Lyman Digital Trigger Pull Gauge, averaged at a very crisp 3-pounds, 2-ounces. The trigger also reset quickly for fast follow-up shots.

Functionality? In 350 rounds I had no jam ups, and one failure to fire. On the later, the firing pin appeared to have dented the rim of the brass deep enough to ignite. I loaded the round back into the T/CR22’s chamber and tried it again—it went off.

The only problem I had with the T/CR22 was learning the correct way to load the rotary magazine. Here the problem wasn’t T/C as much as my unwillingness to read the instructions, even the instructions on the magazine itself: “Press lever to load.”

Hey, I’ve been around, and I know how to load a damn magazine. Right? Nope. Not initially. But the process was easy enough. Press down on the little lever to the left side of the magazine, load the first round into the mag by sliding the rim of the brass into the slot and then turning the round horizontally and sliding it straight in. Once the first round is in place, release the lever, and simply slip in the next nine rounds.

I was running low on ammunition and the light was fading out that day at the range, but I really wanted to know: what could the T/CR22 do at 100 yards? I hustled down the 100-yard lane at my outdoor range and set up some targets, got back to my shooting bench and, using the Winchester Wildcat SuperSpeeds, started putting rounds downrange.

The bullet drop from 50- to 100-yards was over three inches and I adjusted the Trijicon Ascent accordingly. I fired off a few more rounds but from what I could tell through my binocular, I seemed to be all over the place and was hitting a couple inches to the left.

I was rushing against the dusk, and the targets were already getting tough to see. I think a higher magnification scope would’ve been a big help, too, 6x at least, 8x even better.

I had four rounds left in the Wildcat box, loaded them, did some deep breathing and aimed dead center at the white space above the target’s black circle. I methodically slowly squeezed off those four rounds.

Dusk took over. I loaded my gun and gear into my vehicle then made the walk down the 100-yard lane for retrieve my targets. Most of the groups were three inches or so in size, which for a .22 rimfire rifle at a football field length, isn’t all that bad.

Except for those last found rounds. They did peg to the left as I suspected, but they were at the right elevation and had scored a .76-inch group.

That’s not a comprehensive test. I need to get back to the range with the T/CR22 soon to find out for sure. But four shots from a .22LR rig in the near dark that grouped .76 inches? With the scope adjusted two inches right, that’s a head shot on a coyote at 100 yards all day long. Very impressive. Thompson/Center Arms has made a fine .22 rifle for hunting and plinking with the T/CR22.