The King of the Turkey Slam

Have you ever dreamed of taking a turkey grand slam? Then give a listen to Jeff Budz. He’s comleted 106 of them 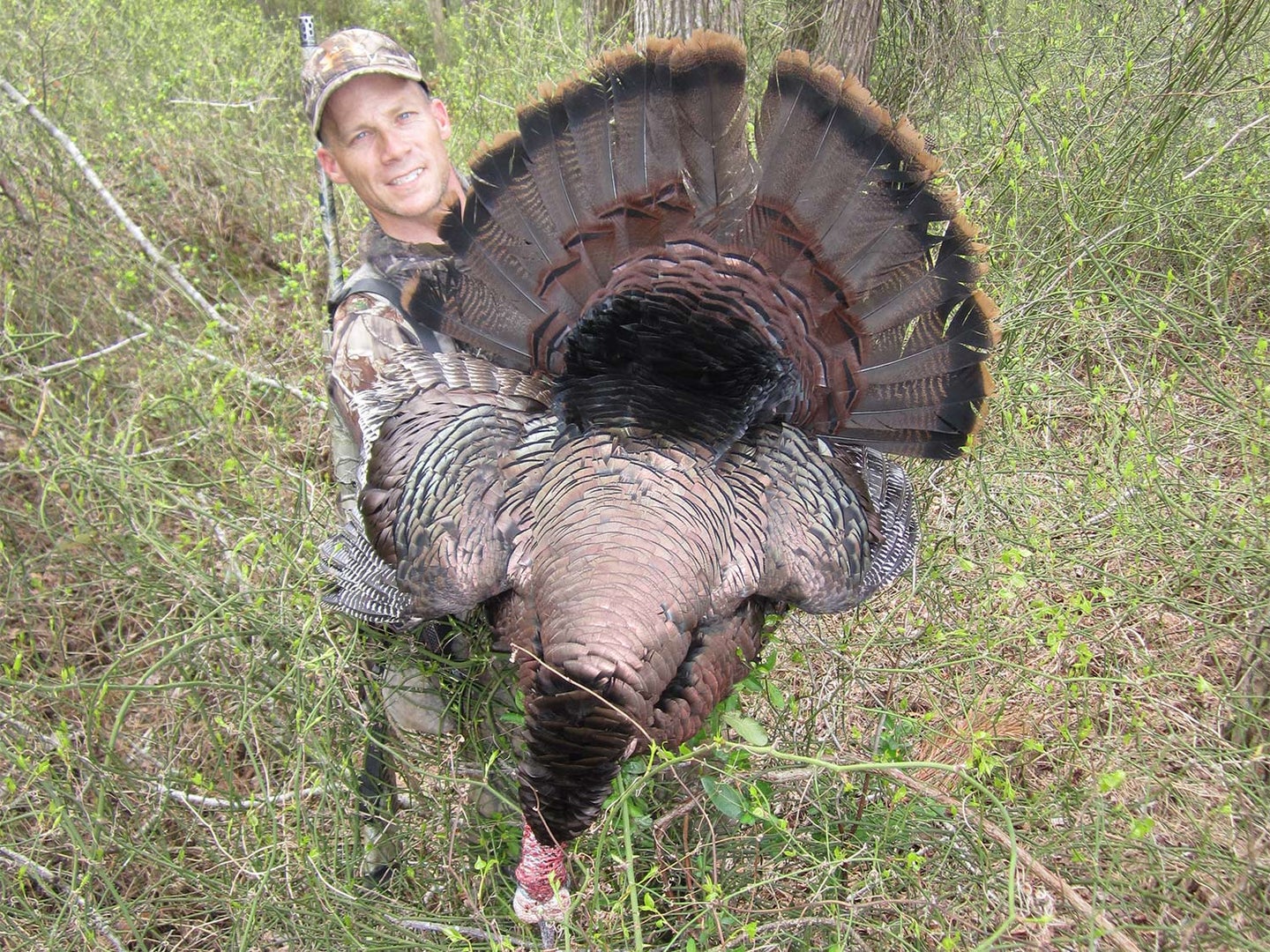 I’d just casually mentioned that I’d taken a March vacation to Hawaii with my wife a few years earlier but didn’t have time to hunt turkeys during the trip. And to Budz, that didn’t compute.

“Wait a minute,” he said, his voice rising and eyes narrowing to a Clint Eastwood-esque squint. “You went to Hawaii in March and didn’t hunt?”

I nodded sheepishly and stared ahead, embarrassed that I’d fallen short of the standards demanded by turkey hunting’s undisputed Slam King. The reaction might have seemed overblown, but it epitomizes the grit and drive of the relentless 54-year-old Budz who continues to set records and pursue turkeys nationwide at a breakneck pace.

Slams Through the Decades

For most turkey hunters, taking a Grand Slam — one each of the four most common United States turkey subspecies; Eastern, Merriam’s, Osceola and Rio Grande — is a lifetime achievement. Taking a single-season Slam is more prestigious. Budz has taken a record 106 Grand Slams during his career, eclipsing the legendary Dick Kirby, who held the previous mark of 61. Moreover, he’s taken two Royal Slams, which requires hunters to also shoot a Gould’s turkey (most common in Mexico), and two World Slams, which add the ocellated turkey (a separate species that inhabits areas of the Yucatan Peninsula in Mexico, plus parts of Belize and Guatemala) to the list. And in 2014, Budz finished his U.S. Super Slam, which involves taking a bird in each of the 49 states with turkey populations. Further, he’s taken several of his Grand Slams with archery gear and almost every shotgun gauge: .410, 28, 20, 16, 12 and 10.

“I made a choice back in college,” says Budz. “I could have gone into a 9-to-5 business, but I said I’m going to do my own thing. If I had to say two words? Never settle.”

Budz didn’t always have that turkey-killing drive. In fact, he never hunted while growing up in Illinois. Then, while attending Southern Illinois University, he met a buddy at a bar, and they hunted ducks and geese that fall. Later, they applied for the Spring 1989 turkey hunt, and on April 1 that year, Budz killed his first turkey during his initial hunt.

“I didn’t have a call,” he said. “I’d never seen a wild turkey. A buddy called in two jakes, and it was unbelievable. And after that, I was hooked. I bought a new shotgun, I bought all the gear, and I bought new calls.”

Budz hunted hard the next two springs but was unsuccessful. Then, in 1992, he shot another jake. He moved to Colorado in August of that year and began hearing about the Grand Slam. His interest piqued, and he took his first slam in 1994 and two more in 1995.

“Then I just happened to look at the records and saw Dick Kirby at 11 (Slams),” says Budz. “I said the view from second place is rough. I don’t like that view.”

From then on, Budz traveled extensively during spring — and sometimes fall — pursuing turkeys across the country, taking as many Slams as he could cram into a season. Of course, that required what other folks might consider to be major lifestyle sacrifices. Initially, for example, Budz managed a restaurant in Boulder, Colorado, but didn’t get paid while he took off to hunt during spring.

During those trips, Budz essentially lived out of his truck, driving at night to avoid wasting precious hunting time and often eating for days off turkeys he killed. That sounds like a spartan existence, but it’s Budz 101.

“When people say they need something, I just laugh,” he said. “If you really, truly narrow down your needs, golly, it’s really not much. When I was young, I heard someone say not to mess with them in the morning until they had their coffee. Because of that one comment, I’ve never had a sip.”

Budz kept extensive journals during those “working-man’s Slam” days, and the statistics are telling. For example, in 1999, he shot 17 turkeys, and those birds had an average weight of 18.2 pounds, an average beard length of 8 2/16 inches and an average spur length of 1 2/16 inches. Further, each turkey harvested required an average of 478 miles driven, 5.4 miles hiked, $86 for licenses and $532 on other expenses. Oh, and he averaged 4.25 hours of sleep per night.

In 2002, Budz moved back to Illinois to run a large hunting operation, but his Grand Slam quests continued. And as his methods and strategies evolved, he became increasingly skilled at planning and executing the often-difficult journey of Grand Slams. His advice and experience can help aspiring Slammers.

“My mom will say that when I was a kid, before I went to bed, I would lay my clothes out on the floor, put the socks in the pants, set the shoes next to the socks and put the belt there, and that’s what I wore to school,” he said. “That’s the epitome of OCD.”

Which still serves him well. Long before turkey season, Budz researches season structures, license fees, travel logistics and potentially productive areas, public and private. He creates a section in the notes on his phone and meticulously saves and maintains every lead from every state. And he’s not shy about following up on those leads.

“Ask the hard questions months before you arrive,” he said. “I call sources and plan turkey hunts daily throughout the year, because you can avoid mishaps if you plan properly. And by planning, I mean having a property lined up for a hunt and a backup property just in case.”

Budz said traveling hunters should pick groups of states to hunt, which makes for quicker multi-state trips with little wasted time and effort. For example, in Spring 2013, he undertook an ultra-efficient 10-state, 12-hunting-day, 11-gobbler spree that included Delaware, West Virginia, Ohio, Indiana, Michigan, Pennsylvania, Illinois, Kansas, Nebraska and South Dakota. He only had to wait one day apiece to hunt the openers of Pennsylvania and West Virginia.

Likewise, Budz said that folks pursuing a Super Slam should first focus their efforts on states that require hunters to apply for and draw a tag. (Delaware and Nevada are the most difficult in which to obtain a license, if you’re wondering. North Dakota doesn’t allow nonresident turkey hunting, but you can circumvent that by hunting tribal lands.) After receiving a license in a draw state, you can then also hunt nearby states that offer over-the-counter tags (30-something in the country).

“Just think about two, three or maybe four states at a time,” he said. “Before you know it, you’ll have hunted 20-some states and be on a downhill glide.”

No matter where he travels, Budz adopts an adaptive mindset, knowing he might have to compete with other hunters to face pressured turkeys. As such, he tries to avoid hunting when other people might be out, preferring to arrive at a destination on a Wednesday and hunt it hard before other hunters show up Friday afternoon. Likewise, he refuses to hunt gobblers — even vocal birds — close to roads, as he knows those turkeys will attract other hunters. In fact, he scours maps before the season to find areas as far from roads as possible, and he makes substantial hikes to access those spots.

Budz spares no effort during any hunt but especially out-of-state trips. He takes advantage of every legal minute of hunting time, arriving at a listening area — hopefully near a roosted gobbler — well before dawn and then staying until last light if needed, hoping to roost a bird. And if he’s not hunting, he’s driving or scouting for subsequent hunts.

“Sleep takes a hit,” he said. “But sleep deprivation is what works for me. Honestly, three to three-and-a-half hours is probably what I do on average during 70 days of hitting it hard during spring. And there’s lots of drive time. The guys with me will sleep through most if it, but I’m eating sunflower seeds and thinking about what we did, where we are, and where we’re going. They’ll ask, ‘How can you drive so much?’ Because I have to.”

You’ve probably guessed that Budz stays in top shape year-round to facilitate all that hiking and the long hours. But that’s a small price to pay when the game is real.

“You can’t have not done anything all year and then just jump out of the truck at a new spot and do it,” he says. “I have to be able to hammer it when I need to.”

Budz admits he’s eased up somewhat on his Slam pursuits lately. He’s married now, resides in Florida, and has a 2 1/2-year-old son and two step-daughters (Budz calls them “bonus daughters”). Still, that doesn’t mean he’s slowed down. Budz is currently striving to take a longbeard every month for 12 consecutive months (and if you’re wondering how he’ll do that, remember that Florida offers some very early “fall” seasons that actually begin in summer). He plans to attempt a 16-hour Grand Slam this spring, thanks to a friend with an airplane, and will travel to Alaska later this year for caribou. If he kills a bull, he’ll have successfully hunted all 50 states.

Further, via his outfitting service, Tag It Worldwide, he guides many hunters each spring for Osceola hunts or during multi-state Grand Slam quests. And he gives those hunters the full Budz experience, complete with nonstop motion and relentless pursuit.

“Hunting is overrated,” he said. “You’re coming with me to kill. I make no false pretenses about that. And I’m going to pour it to you. My Grand Slam clients would literally ask for their money back if I didn’t tighten the screws on them. It’s sort of full circle and why I excel at what I do.

“I’ve never sat down on a couch and just laid it all out as far as my motivation. It’s just in you. I’m always trying to set the bar high.”

Oh, and the results of that South Dakota trip mentioned at the beginning of this article? The first morning, Budz hunted with one of my buddies, who quickly tagged out with two gorgeous Merriam’s. Then, Budz found me, quickly located a bird and put us in position for a sure-kill shot. While that gobbler was still flopping, another longbeard gobbled on a distant ridge, and Budz instructed me immediately to go kill the turkey. I obliged. Then, Budz quickly found the third member of our group, located another batch of birds and put our buddy in position to score a midmorning double. By noon, we were on the road home with six punched tags, and Budz was on to his next group of hunters.