Zink Calls turkey product manager Josh Grossenbacher had a big Kentucky field flock on his radar one spring. His five-decoy... 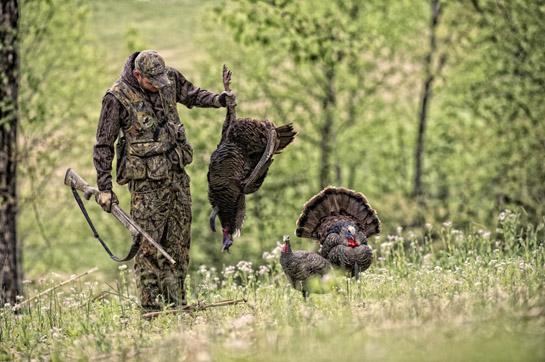 A similar setup worked for us a handful of years ago on a big Bluegrass State flock in the same field. Two longbeards came running to the spread–following a call-curious hen at first then running past her, away from other live hens. Those gobblers challenged the strutter decoy with the Avian-X hen. One longbeard flew away.

This next time–one spring later with a similar setup–instead of running to the decoys, Grossenbacher groaned as he saw two longbeards drift away. Why? Dominance issues.

“A hen came right to our decoy spread,” Grossenbacher said, “but the two longbeards hung up at 60 yards and wouldn’t commit. Then they left. They didn’t like something. My guess is both were sub-dominant gobblers avoiding the full-fan strutter.”

Recently Zink Calls solved the dominance issue with the Avian-X Jake Quarter Strut decoy. This jake fake has a non-aggressive pose and short beard with an appearance that often works with all age-class male turkeys. This year they’ve come out with yet another new turkey fake called the Avian-X LCD Strutter Decoy. Why? To challenge dominant gobblers in certain situations, but not too much: it’s 15 percent smaller than a real turkey (see photo).

“As decoy numbers go … the more the merrier, especially in the early season. If anything, it might increase your odds at pulling in a gobbler, especially if a jake decoy is used with a bunch of hens. Or a strutter,” Grossenbacher said. He places all decoys at 15-20 yards, heads facing his setup and feeding in one direction.

And it works. That’s Walt Gabbard of Zink Calls pictured in the lead photo with a longbeard taken last spring, the prototype strutter deke and an Avian-X hen. Check out Zink Calls and Avian-X decoys here.