7 Things You Need to Know Before Buying an AR Pistol

A versatile weapon, AR pistols are all the rage, but here’s what you should know before pulling the trigger 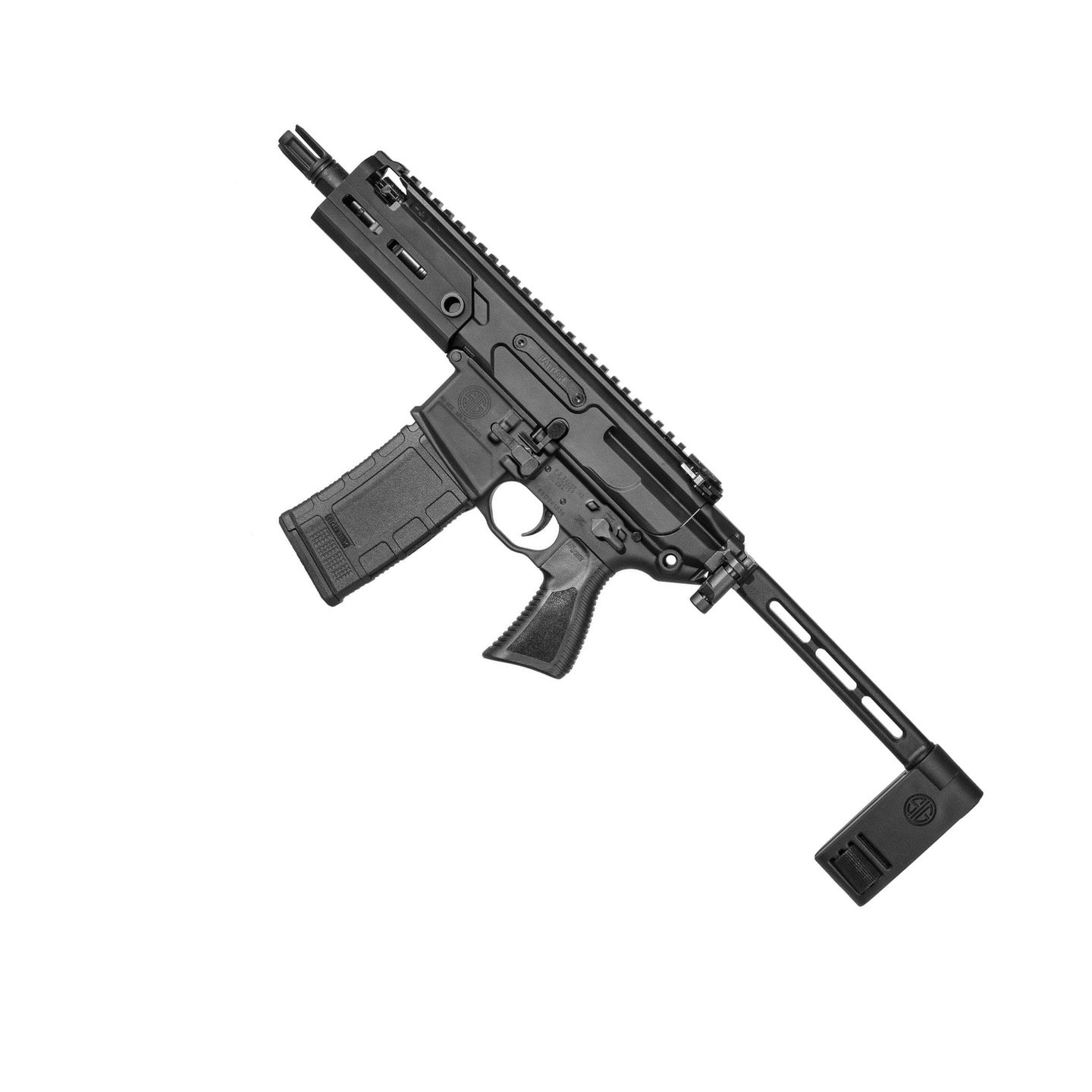 The vast majority of shooters, myself included, have historically viewed AR pistols as nothing more than a noisy cricket; a fun-gun range toy to show off to friends. That, or a way to maintain excitement until your short-barreled rifle (SBR) Form 1 has been approved by the understaffed examiners that call the ATF’s NFA branch home.

AR pistols are not all that easy to shoot accurately due to their size, weight, and poor ergonomics. They shoot rifle rounds that produce sharper felt recoil, which makes off-hand shots shaky, at best. But the AR pistol of yesteryear is not the same platform shooters are enjoying today for one reason: the stabilizing brace.

The introduction of the pistol stabilizing brace deserves full credit for the surge in popularity of this once decadent variant of the AR-15. SBRs have always had a certain sex appeal, but the cost of admission and draconian rules associated with them have been a turn off for all but the most dedicated consumers. With braced AR pistols available off the shelf, the ultimate compact, semiautomatic truck gun was reborn, and continues to enjoy an ever-increasing level of popularity.

It all sounds great, but there are a few things to know about pistol braces and their use. First and foremost, a pistol stabilizing brace is a device that typically attaches to the receiver extension (buffer tube) of your AR pistol and is intended to improve accuracy by using the shooter’s forearm to support and stabilize your AR pistol (when fired one-handed).

Now, the ATF has previously determined that attaching an arm brace to a firearm does not alter the classification of the firearm or subject it to National Firearms Act (NFA) control. With that said, the classification is based upon using the device in the manner in which it was designed—to assist the user in stabilizing the platform for single-handed firing.

Now for the last part, if the user happens to be firing their AR pistol with an unmodified stabilizing brace from a particular position and places the brace on or against their shoulder, this act does not change the classification of the platform.

If you want further clarification, SB Tactical released a statement in 2017 regarding the matter.

With the fine-print and legalese out of the way, let’s dig into what features and components should be on your short list as you browse the market for the right AR pistol.

A myriad of braces are available today, with more set for release. The most notable and largest manufacturer is SB Tactical, a company offering braces for nearly every platform you can think of and originator of the stabilizing brace. Braces are available in a variety of configurations that include friction fit, fixed, telescoping and folding flavors that are constructed of plastic, rubber, polyurethane and/or aluminum—all in differing shapes, sizes, and weights. The most popular braces today are of the telescoping variety such as SB Tactical’s SBA3 and SBM4, Maxim Defense PDW Brace, Gear Head Works Tailhook or AR and MCX/MPX pistols from SIG Sauer.

The benefits of an AR pistol like the POF 415 Edge, are many, but two of the most appealing are compact size and light weight. When choosing a barrel, go with a lightweight barrel profile, fluted if you can. The reduction in weight is substantial and the balance of the platform will be improved. Other ways to reduce weight are a lightweight, free-float handguard (I like M-Lok), lightened upper and lower receiver sets and not over accessorizing. It’s a pistol after all.

When you shorten the barrel, you’re going to lose velocity, it’s just Internal Ballistics 101. But that doesn’t mean you’ll lose capability; just as long as you choose wisely. 6.5 Grendel performance for an 11-inch barrel is amazing and capable of taking down mule deer-sized game (Hornady’s 123-grain SST is a great option), even at what are considered mid-range distances.

The .300 Blackout was optimized for short barrels. A 9-inch barrel gets a complete powder burn and is going to get the most out of Blackout rounds. In fact, going much longer than that provides little enhancement to the exterior ballistics of the cartridge. Most of us know (but it’s OK if you don’t), .300 Blackout suppresses well, which is a great reason for going short; even with a suppressor attached, the overall length of the platform will still be shorter than a 16-inch barreled carbine. .300 Blackout bolt action rifles like the Christensen Arms MPR Pistol, outfitted with a suppressor are the quietest braced pistol option.

Also, .223 Rem/5.56 NATO continues to be a popular chambering in all AR configurations, including pistols. Once you drop below an 11.5-inch barrel, the platform quickly runs into reliability issues and terminal performance becomes less predictable as distance to the target increases.

In the case of the .223 Rem/5.56 NATO cartridge, choosing a heavier grain weight is generally choosing right. My preference is the 70-grain TSX by Barnes, but Black Hills also loads it. Ensure your barrel twist rate is a 1:7, which offers greater stability of heavier projectiles, leading to increased accuracy.

My absolute favorite short barrel cartridge is the .300 Blackout. If you’re going to go short, go short. With that said, ensure you choose the right load. The best in the business is Black Hills 110-grain TTSX, a.k.a. Black Magic. The projectile is known by several names, including TSX, TTSX and Vor-TX. This black polymer-tipped, all-copper projectile has become the standard by which all others are judged and was developed by Barnes Ammunition.

Read Next: Why the AR-15 Is the Greatest Rifle Ever

So, what makes the round so special, aside from being the 2012 Outdoor Life Ammunition of the Year? Barnes published data states the projectile will reliably expand in soft tissue down to around 1,400 feet per second. The round rips out of a 9-inch barrel at about 2,350 feet per second, and given the expansion threshold, nets you reliable terminal performance in-excess of 300 yards. Going a step further, that same round fired from a 5.5-inch barrel at 500 feet above sea level was chronographed at 1,925 feet per second, which translates into reliable performance at a little over 200 yards away. You might be asking what kind of performance we’re talking here. Well, at that distance, the round immediately expands upon impact and retains nearly 100 percent of its weight, penetrating to a depth of 18-plus inches in 10 percent ballistic gelatin. Not bad from a 9-inch barrel, and simply astounding performance from a 5.5-inch barrel. The TTSX, without question has no supersonic peer, when we’re talking .300 Blackout.

There are many muzzle devices available on the market today. You might be tempted to install a muzzle brake on your AR pistol to reduce muzzle rise and help manage recoil.

A short .223 Rem/5.56NATO barrel coupled with a muzzle brake equals increased concussion and noise, both of which quickly become unpleasant for both shooter and spectator. If you’re after a light show, the combo does produce a huge fireball visible with each round fired at low light.

On the flipside is the flash hider. Reduction in flash is a desirable feature for most short-barreled AR pistols. If you’re undecided, or must have some type of muzzle brake, take a hard look at SureFire’s WarComp. Not only is it a rock-solid mount to accept their suppressors, it’s a hybrid muzzle device that effectively reduces muzzle rise, and the amount of flash leaving the barrel is comparable to a sushi stick.

Use your head wisely when choosing an optic to equip your AR pistol. A red-dot sight equipped with a small dot, and a large window is a good choice. Leupold’s excellent LCO or an EOTech EXPS come to mind. If magnification is needed, several optic manufacturers offer quality 3-power magnifiers that will greatly extend your AR pistols usability at distance. In the proper mount, these magnifiers can be flipped to the side or removed when not needed.

Low power variable optics in the 1-6x range with good eye relief, true one power and illuminated reticles are also excellent choices. They can add some ounces to the platform, especially when accounting for the weight of the mount, but a brace certainly helps with that.

Depending on your expected usage, you may be tempted to mount a 2.5-10x or 3-18x optic. If you choose to go that route, be sure you can explain how you plan on effectively aiming, supporting and shooting it with a single hand, if questioned. Just food for thought.

The last component to consider is the pistol grip. The standard A2 pistol grip and aftermarket replacements, such as Magpul’s popular MOE and MIAD grips, are fantastic additions to carbines and rifles with longer hand guards and traditional length of pull measurements. Once you shorten a platform, a more vertical pistol grip will be much more ergonomic. Magpul offers its K2 and K2+ grips, and BCM has its Gunfighter series, both of which will provide a much more enjoyable and effective shooting experience, as they allow you to keep your wrist straight and locked.

The AR pistol is a platform of many uses. Sure, they are a ton of fun at the range, teaching children how to shoot, and for use in defending the homestead, but consider them for hunting applications as well. A light, compact AR pistol in the right caliber is easy to carry for long distances and over challenging terrain. It’s also painless to haul up into a treestand or pack into camp. When it comes time to take the shot, they’re typically fast-handling, well-balanced and very ergonomic.

As the AR pistol continues to evolve, expect to find more of them chambered in .308 Win, 6.5 Creedmoor, .450 Bushmaster and other heavy-hitting cartridges ideal for medium-sized game or camp defense against bears and other predators. Next time you head off into the backcountry, consider bringing one along.

Once you’ve settled on an AR pistol, take the time to intelligently accessorize it to better fit your intended use. White lights, slings, aftermarket triggers and ambidextrous controls are all upgrades worth considering. Most importantly, get out there, have some fun and share the experience with someone new to shooting.