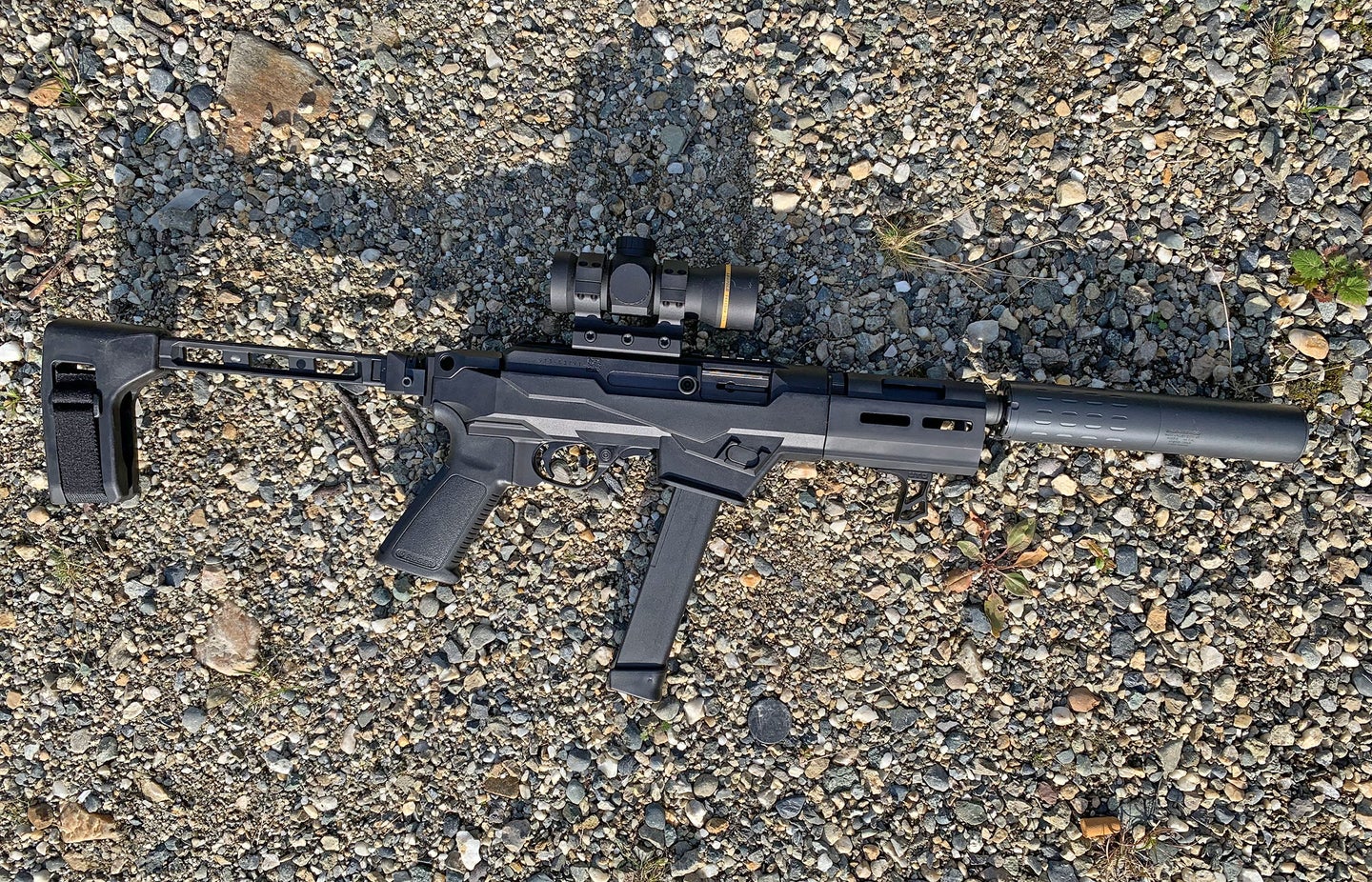 The Ruger PC platform has been around for a few years now, and it’s built a reputation as an affordable and adaptable takedown 9mm carbine. However, the new 2021 iteration, the Ruger PC Charger, is what the platform should have been all along.

If a 10/22 and a Ruger Precision rifle got together and had a kid, you’d end up with something like the PC Charger, or at least that’s how I’d describe it. The 10/22’s influence is plain to see in the style and function of the receiver, action, trigger, and operation. This action sits in a polymer chassis with lines resembling Ruger’s popular RPR. Its short barrel, ability to utilize pistol braces, and versatility all contribute to make it the most optimized Ruger PC yet.

At its core, this gun shares the same basic features as the PC Carbine and other PC models. The 10/22-style aluminum receiver features an integral machined optics rail, and the Ruger PC Charger uses the same simple takedown system that the carbines use. Once the adjustment knob on the rear of the barrel is properly adjusted (the first time the gun is assembled), the barrel can be removed simply by pushing the locking lever forward, rotating the barrel assembly clockwise, and pulling straight out of the receiver. It’s replaced even easier by simply lining up the lugs, pushing the barrel assembly into the receiver, and then rotating clockwise until the locking lever clicks into place.

The PC charger features a glass-filled polymer chassis that holds the receiver and trigger group. It has no stock, but it can be fitted with a brace (more on this later).  It features a Picatinny rail on the back and QD sling receivers on each side. Within the chassis also sits the removable and interchangeable inner magwell and ejector assembly. The receiver and trigger assemblies are held into the chassis with a pair of screws (front and rear) that are torqued to 65 inch-pounds. Disassembly is straightforward and very similar to that of a 10/22. The magazine release button is located toward the front of the magwell and can be easily reversed to work on either side of the gun.

On the front end, the removable barrel assembly features a milled handguard with M-LOK slots, a hand stop, and a 6.5-inch threaded 9mm barrel, (the original PC carbine featured a 16-inch barrel). The Charger has no iron sights, unlike the original carbine, and is intended to be paired with an optic.

The PC Charger’s versatility is what makes it so intriguing. Sure, the idea of a takedown 9mm plinker and survival-type gun is cool, but you’re not really gaining much from a survival, defense, or hunting standpoint with the 9mm in a full-length 16-inch barrel. The popular pistol brace platforms create a more compact, but equally capable, gun. The Picatinny rail on the back of the chassis mates easily with a brace like the SB Tactical FS1913 for better accuracy.

The overall adaptability of the Charger is attractive, as well. Both the magazine release button and charging handle can be reversed and used on either side of the gun to accommodate personal preference. The chassis is compatible with any standard AR grip that you might prefer. At face value, the trigger group is very similar to the 10/22, fitted to the receiver with removable pins. Companies like Franklin Armory are making Ruger PC Charger binary triggers that you can easily use in the PC Charger and other Ruger PC carbines.

The shorter threaded barrel makes using a suppressor even more comfortable and convenient than on longer barrels. Probably the smartest feature, however, is the interchangeable inner-magwells that come with the PC Charger. The gun ships with Ruger SR-series pistol magazines, but also includes a magwell that accepts the readily available Glock magazines. The magwell is easily installed and seems to work flawlessly with newer Glock brand magazines.

This is an attractive feature, because the 33-round 9mm Glock proprietary magazines are extremely popular, reliable, and widely used in a variety of 9mm carbine and pistol platforms. Simply having another reliable option for magazines really adds to the “versatility” value of this gun. It will also work with older Glock magazines, but mags with a magazine latch slot on only one side of the mag will only work with the mag release on the left side of the Charger. Newer Glock-style mags with the slot on both sides of the magazine will work with the magazine release positioned on either side of the Charger.

For my Ruger PC charger accessories, I fitted this gun with a Leupold Freedom RDS 1x34mm red dot, which has a higher profile than some competitors on the market, but it’s a solid option for the price. There are a lot of Ruger PC Charger folding brace options, but I used the SB Tactical FS1913. For the Ruger PC Charger’s suppressor I used a Silencerco Hybrid 46. Accuracy was about what I would expect from this caliber and barrel length. My 50-yard, 5-shot groups averaged 2.5 inches, with the best being just under 2 inches with Winchester USA Ready defense 124-grain +p loads. It shot 3- to 3.5-inch groups for most 147-grain loads, including Federal Premium Syntech Training/Match and Hydra-Shok defense loads. This sort of accuracy is certainly satisfactory for the PC Charger’s applications.

Although knowing how accurate the gun is was important, this isn’t something that you’re going to be shooting off of a bench. The practical applications of this gun place a lot more weight on reliability and handling than pinpoint accuracy. Affordability and versatility are all great, but what I really wanted to see was how reliable this gun would be, especially the interchangeable magwells. I burned through a lot of ammo (both with and without a suppressor) in unsupported positions with quick transitions between targets with a variety of magazines and ammunition. Quick reloading and malfunction drills gave me a feel for both how well it handled generally, and how to best configure the gun for my use.

What the Ruger PC Charger Does Best

I fired several hundred rounds of various 9mm loads through my Ruger PC Charger and had only a single malfunction—one stovepipe using an older G17 magazine. Aside from that, it chewed up and spit out everything from 115- and 147-grain handloads with mixed range brass, to premium defense loads. I tested the gun without cleaning it, aside from periodic wipe-downs of major components.

The PC Charger’s modularity makes it adaptable to a wide variety of users and preferences, and the exact configuration can make a big difference in how well it handles for the individual. For someone who is a regular 10/22 shooter, this will be a very comfortable gun. The Charger’s handling is tight, and the compact gun is highly maneuverable. The forward location of the magazine release is reminiscent of the old M3 Grease Gun, and being manipulated by the support hand, provides instantaneous and reliable magazine removal without changing the trigger hand’s grip. The user can simultaneously press the mag release and pull the magazine free, not relying on the magazine to drop from the chassis under its own weight.

What the Ruger PC Charger Does Worst

After a couple hundred rounds with a suppressor, I noticed that the mag release button was sticking. Upon taking it apart, I saw that some unburnt powder that was forced back into the action by the pressure from the suppressor had accumulated on the magazine release. Simply wiping it away cured the problem. Being a straight blowback-operated gun, the PC Charger is going to get dirty, especially if you’re using a suppressor. So, depending on the powder you’re using and how much shooting you do, plan on regular cleanings and check your chassis and magwell for unburnt powder. This was the only reliability-related issue I experienced.

Although possibly a pretentious gripe, I’d like to see a little bit smoother trigger break and reset. The stock trigger on my Ruger PC Charger is a bit gritty, compared to any decent drop-in trigger for an AR, but it’s not bad. For the ultra-picky, it wouldn’t surprise me to see Ruger PC Charger trigger upgrade options that are a little bit cleaner in the near future.

As far as 9mm PCC-type firearms go, this one is a good bargain. It’s about half the price of competitors, and it brings a tremendous amount of utility and versatility to the table. The PC Charger is every bit as useful for a pack or survival gun as the larger Ruger PCs, but it also makes for a very suitable beater truck gun, home defense tool, or an absolutely joyful plinker.