Confusion about subsonic ammunition abounds. Here’s what you need to know before loading up 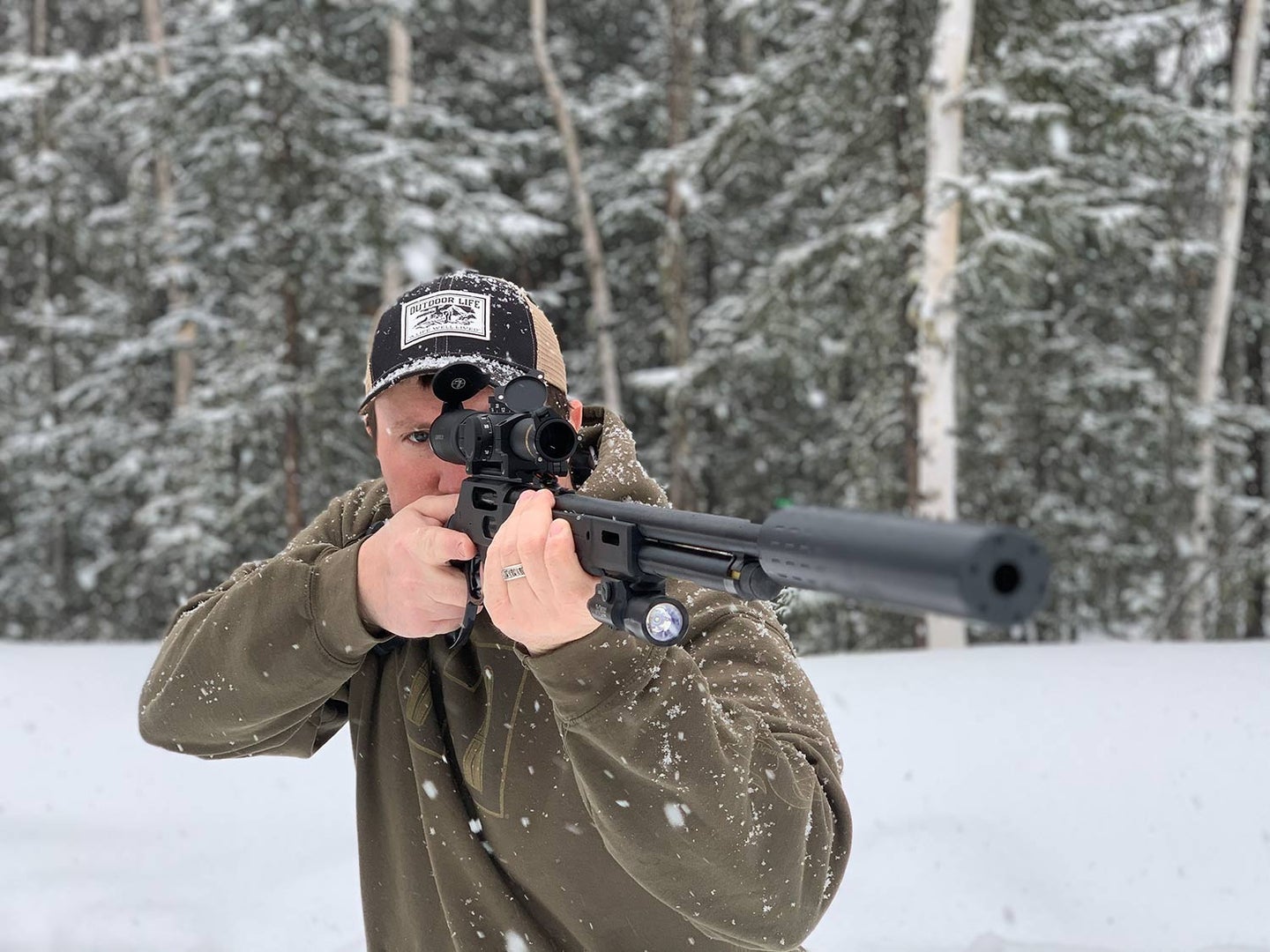 Big bore cartridges like the .45-70 are great for heavy bullets and subsonic loads, and are probably the most effective for hunting at short ranges. Tyler Freel
SHARE

Hand-in-hand with what could be called the suppressor enlightenment in the United States over the past decade, comes the rise of subsonic ammunition. I’m referring to ammunition specifically crafted as subsonic, to be paired with rifles outfitted with a suppressor. There is plenty of misunderstanding about subsonics, what they do, and how you should use them. So the time has come to try and clear up any confusion. Here are 10 things everyone should know about subsonics.

1. What is Subsonic Ammunition?

Quite simply, subsonic ammunition is any cartridge that propels its projectile at a velocity that is below the speed of sound—approximately 1100 fps depending on atmospheric conditions and elevation. At speeds above the sound barrier, the bullet itself creates a sonic boom, or in the case of bullets, a high-pitched crack, perceptible all along its flight path. A bullet traveling below the speed of sound does not make that distinct sonic crack.

Subsonic ammunition is nothing new, so why the current surge in its use? Many old cartridges, and several still in use like the .45 ACP are subsonic cartridges in their standard loadings. The movement toward effectiveness and velocity, though, has rendered many old, slower cartridges generally obsolete. This relatively recent resurgence is due completely to the rise in popularity of suppressors, and its excellent compatibility with subs. Subsonic ammo is typically extremely quiet through a suppressor, mild recoiling, fun to shoot, and useful in hunting and self-defense applications.

3. Why is Subsonic Ammo Great for Suppressors?

Suppressor users love shooting subsonic ammo primarily because it lacks the loud crack of supersonic loads. You probably won’t hear the difference without the suppressor, but if you put a can on your rifle you can easily perceive the difference in sound between supersonic and subsonic ammo. The rapidly expanding gasses from the muzzle blast are contained, redirected, and slowed by the suppressor, and with no supersonic crack, there’s not a hell of a lot of sound left over. They still aren’t silent, however the slight discharge of gas, action clinking, and impact of the bullet, are sounds that will put a smile on just about any old curmudgeon’s face.

If you’re dipping your toes into the world of suppressors and subsonics for the first time, there are a few things to be aware of when selecting your gun, cartridge, and suppressor. The most important, is to verify that your gun is stabilizing the subsonic bullets before shooting them through a suppressor. Subsonic loads typically use heavier bullets that may not stabilize with some slower-twist barrels. This can cause a baffle strike, causing serious injury and damage. A few shots through paper are an easy way to verify stabilization. Another thing to consider is the suppressor itself. It’s common to use an over-bored suppressor (think .308 on a .223), and they work great with supersonic loads, but a cartridge must generate enough gas pressure to pressurize the can in order to slow and quiet the gasses down. An under-pressured subsonic cartridge may sometimes not quiet down well in an over-bored suppressor. For example, a 200 grain, 10mm subsonic load is very quiet with the correct end cap. But throw a .460 end cap on the same suppressor with the same load and it’s much louder. Finally, understand that unless designed to function specifically with subsonics, many semi-autos will not cycle if the ammunition is simply loaded down. For example, a .308 bolt action is perfect for subsonics, but if you use them in a standard AR-10 they will be quiet, but you must cycle the action manually for every shot.

When you’re getting started, it pays to know some of the more ideal cartridges for utilizing subsonic loads as seamlessly as possible. This isn’t a cut and dry list, rather some common and effective options, compatible with many of the suppressors and hardware that’s out there. As a rule of thumb, you want to think heavy bullets and limited case capacity. Probably the most prolific in recent years is the .300 blackout, designed specifically to accommodate both subsonic and supersonic loads in the same rifle with minimal adjustments. The 7.62x39mm is another that can be made to be a great subsonic cartridge (but most factory ammo is supersonic). If you’re thinking hunting, cartridges like the .450 bushmaster, .458 SOCOM, and .45-70 Gov’t, and the newer .350 Legend are good options. For handguns, your two biggest, and most common contenders are the .45 ACP which is already subsonic, and the 9mm. Although your bargain box of 9mm ammunition is typically 115 grain and supersonic, 147 grain loads are becoming much more common, and those will hush down as quiet as anything.

Cartridges that you probably shouldn’t even consider for subsonic ammunition are ones that are typically of very high velocity or have a very high case capacity compared to the bullets it shoots. A .223 doesn’t have a huge case capacity and subsonics could be loaded for it, but you’re talking about backing it down to the equivalent of a .22 magnum or so with little or no juice to cycle a semi-automatic action. Popular cartridges like the 6.5 Creedmoor could be loaded successfully to subsonic velocities, but with fairly light bullets, it’s not much more than a novelty. On the other end, a .338 Lapua shoots a big bullet, but the case capacity is such that it’s horribly over-cased for consistent subsonic loads. The same can be said for the .300 magnums, which are just too over-cased to be ideal. Something like the .308 is a much more realistic option.

Read Next: The Best New Rifle Ammunition from SHOT Show 2020

Generally, many of the principles of selecting a gun to use with subsonic ammunition are the same as for using a suppressor. However, there are a few things to consider when making your choice beyond the basic threaded muzzle. As mentioned previously, if shooting subsonics is a high priority, be sure and pick the appropriate action and chambering. Although a .223 or 5.56mm AR is great with a suppressor, it’s not great for shooting subsonics (a .223 subsonic is akin to a glorified BB gun anyway). You’re much better off going with the previously mentioned .300 Blackout. It’s essentially the same rifle, and uses the same magazine, but provides much more flexibility when it comes to ammunition velocities. If you’re looking for the quietest setup you can put together, a fixed-action is the way to go. A bolt-action rifle is a superb fit while, a semi-automatic will still leak some gas and sound. For handguns, you’re basically limited to semi-auto or single-shot actions, as almost no revolvers have a gas sealing cylinder and won’t really work well with a can. With any gun you plan to use subsonics in, make sure the twist rate of the barrel is rated to stabilize the bullets you intend to shoot, and verify on paper before using through a suppressor.

Although some subsonic cartridge loads are totally suitable for hunting, they are typically underwhelming. It’s important to understand their limitations and that they generally are going to be less effective than higher velocity loads. Velocity plays a huge part in the damage that a rifle inflicts, and at subsonic velocity, cartridges just don’t pack the same punch. If you plan on hunting big game with subsonic ammunition, be aware of this fact, and if you can, select bullets that are designed to expand at low velocities. Also keep in mind the more dramatic trajectory and faster drop than with supersonic loads and that you will have a much shorter effective and lethal range.

In recent years, the offerings of factory-loaded subsonic ammunition have increased greatly for hunting, target, and self-defense applications. In addition to the cartridge offerings that were already subsonic by nature, the purpose-built ammunition for suppressors has increased enough that it is very well worth considering. The .300 blackout will give you the most variety and volume of centerfire subsonic ammunition, being the most popular. However, offerings like Hornady’s 410 grain Sub-X in .45-70 and Winchester Ammunition’s 265 grain Super Suppressed .350 Legend are examples of ever-growing options to meet demand, and there are now a plethora of purpose-designed .22 long rifle subsonic loads on the market today. If you’re not a hand-loader, it’s well worth it to consider selecting a cartridge with wide availability.

Many shooters have been rolling their own subsonics since before it was cool, and there is a lot of load data out there for all but the very newest cartidges and applications. Handloading is a great option for those who are already equipped to handload and/or are using cartridges with few factory offerings. For bolt and lever actions, it’s typically very easy, and using a high volume-to-weight powder like Trail Boss will typically use up enough case space to produce consistent results. Your standard load manual may not have subsonic loads listed, so use caution and good judgement with your sources, and always start low and work up. Just like any handloading, a bit of work and development can get you just the load you’re looking for.