5 Ways to Become a Better Rifle Shot on Mountain Hunts 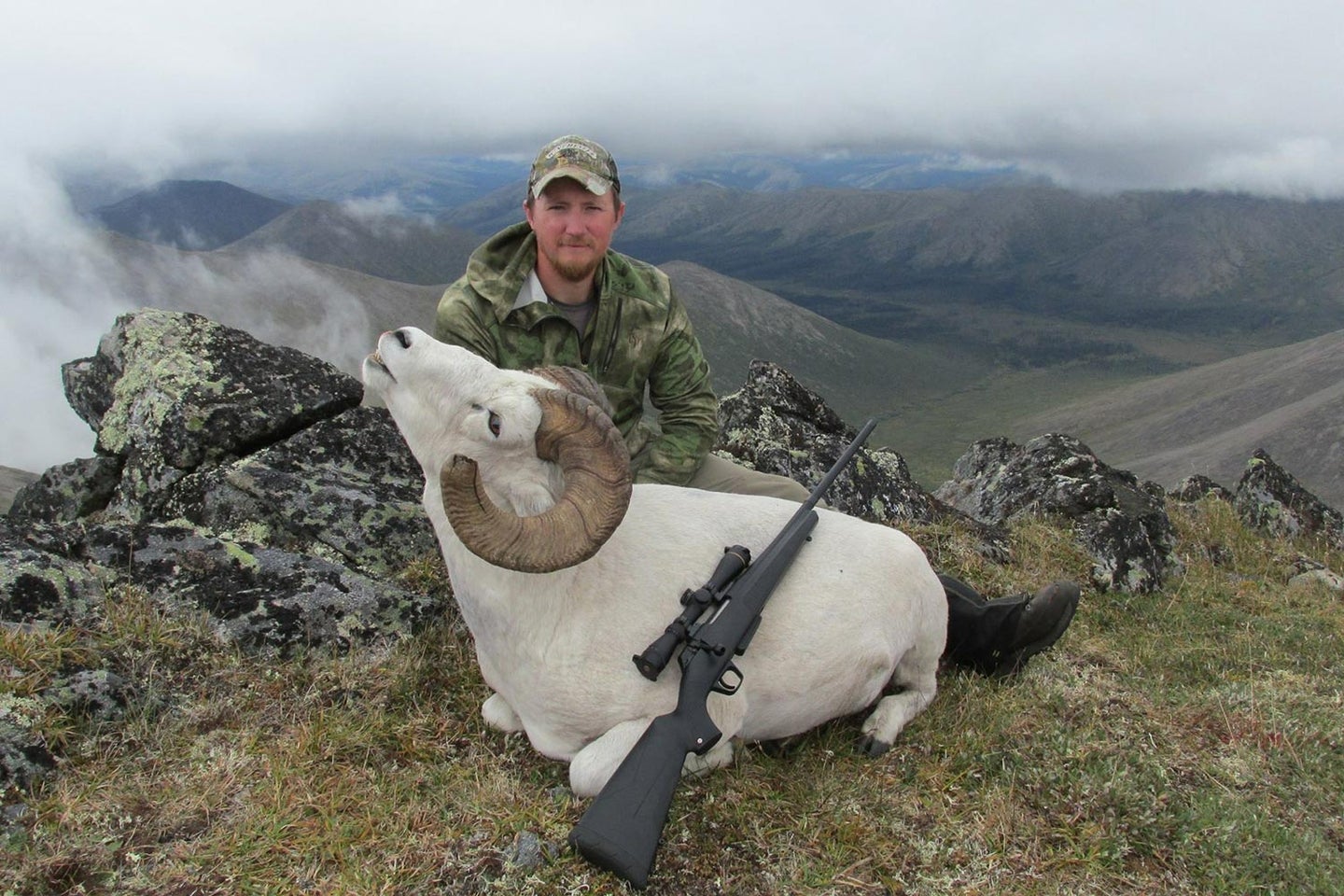 A rifle shot takes a fraction of a second. It’s the fastest part of a mountain hunt, but only a sliver of what makes a mountain hunter successful. There’s much more time, effort, and cash spent to get you to this point, but it’s also critical to make the shot when it matters. That’s why we’re out here, after all. Choke at the most inopportune moment, and all your dreams and efforts will be for nothing.

We always want to make the first shot count, and the stakes are high on a rugged, backcountry, mountain hunt. It’s not like chasing pronghorn, where if you miss or bust an antelope, you just go find another one. If that first bullet misses, or worse, strikes the animal too far back and only cripples it, the hunt can turn into a negative experience quickly. You might not get another round off in time before losing sight of the animal, and that will leave you with a bad taste in your mouth for years—you may never get over it.

Shooting your rifle accurately in the mountains when the pressure is on takes the right rifle platform and practice. Fortunately, there are things you can do to help ensure your first pull of the trigger results in a hike with a heavy pack—and not the walk of shame.

In the mountains, more bells and whistles on your rifle translates to more weight to carry, so you will often find the most ideal rifles are lightweight and simple. A 12-pound chassis rifle with a high-powered optic and an Atlas bipod is going to be an easier gun to shoot accurately than a lightweight mountain rifle, but it’s hell to carry. Even on a bench rest, some of the lighter rifles are challenging to shoot, as their lack of mass weight makes them much more susceptible to human error. So, you have to get plenty comfortable with lightweight guns before the hunt. Everything becomes more important when you’re shooting a lighter rifle: position, grip, breathing, and the rest all factor in. You also need to consider the cold vs. warm bore impact shift, and how quickly the pencil-thin barrels will heat up, which causes projectiles to become less accurate.

My opinion is it’s silly to have anything more than a 10x magnification riflescope on top of a light rifle because it only adds weight to the gun and you won’t gain much more of an advantage from a higher magnification optic. I recommend a 10x because there are some very light scopes available, like the Leupold VX3i. Something in the 33mm to 36mm objective and 2.5-7x magnification range is optimal for a mountain rifle. It might sound absurd to use a relatively low-power scope on the hunt of a lifetime, but trust me—it’s plenty. In my 17 years of hunting sheep and goats, I would say that the average shot distance I’ve taken falls between 225 and 275 yards. The farthest shot I’ve made on a sheep was 465 yards, and the 7x riflescope provided plenty of magnification to get the job done with a single shot. Most hunters have no business shooting at ranges beyond that anyway (and for many, at or under those ranges), so more magnification is unnecessary.

When most people think of mountain hunting, the first thing that comes to mind is long-range shooting. Inexperienced hunters think they will be forced to make extraordinarily long shots, and it just isn’t true. Sure, in some cases your only option may be a very long shot. But it’s still your choice to pull the trigger or not, and with some patience, you can usually find a way to get into a more comfortable range. In preparation for a mountain hunt, you should know what your rifle will do at more extended ranges, but you’ll be best-served to focus most of your practice on fundamentals and improvised shooting positions. I’ve spent a lot of time ensuring my rifle was dialed in out to 500 yards, only to be presented with a quick 100-yard (or less) shot from an improvised position.

I’m a firm believer that a hunter should take every advantage he or she can get when it comes to a solid rifle rest, especially in mountain hunting. For decades, sheep and mountain goat hunters typically relied on their backpacks or rocks as a rifle rest, but these days you should bring a bipod. I carried a steel Harris bipod in my pack for years, attaching it to the rifle during the final stalk. I found it was worth the weight, but now we don’t even have to worry about that. A few years ago, the British company Spartan Precision Equipment came out with the Javelin, a carbon-fiber bipod that pops securely into a magnetic socket on your rifle when you’re ready to shoot. It is removed just as easily, and weighs less than half of just about anything else.

Tripods are another great option for a versatile and practical rest in the mountains. Although I find the saddle clamps aren’t optimal for a tripod, the tripod will mostly be holding your spotting scope or binoculars anyway, so you might as well use what you have. I have shot sheep and caribou just resting my rifle atop the tripod itself. Good tripods are expensive, and if you’re looking to buy a do-all tripod, the Spartan Sentinel is a tough one to beat. It’s high-quality, rugged, and simple. It uses a magnetic rod atop a ball/socket fitting that can be adjusted with one hand, rather than a traditional panhead. This rod is made to fit directly into the socket on the rifle that the bipod uses, and they also make a minimalist’s spotting scope adapter. The legs of the tripod thread out and are meant to double as trekking poles, or to allow the shooter to use the tripod as a bipod or monopod. For a serious mountain hunter, they are worth a look.

You don’t need to spend big on fancy gear to shoot your rifle well, but you should find what works for you and stick to it. There are a lot of lightweight tools at your disposal that really do help improve your shooting, so choose wisely.

Read Next: How to Pick the Ultimate Backcountry Rifle and Cartridge That’s Right For You

All the fancy gear in the world won’t help if you don’t practice and develop good shooting skills. Mountain hunting shots have a reputation of being extremely difficult because they often are taken at longer distances. But “long range” is a relative term. Generally, if you have a little patience, you can get within 350 yards or so, often closer. The wind can be a major challenge in the mountains, which is all the more reason to keep the distances as short as possible. It’s often pointless to try and make an accurate wind call at longer ranges, and it ultimately boils down to shooting fundamentals. Even though a live animal in the mountains is different than paper, I’ve found that a solid foundation helps the consistency of my shooting and stave off buck (or ram) fever. This might be boring to hear, but it’s the truth. I also owe much of my skill to competitive rifle shooting, and I think the PRS style competitions are a great way to develop your skills in improvised positions.

Even if all the shooting you can do before your hunt is at the range, practice the fundamentals and record your groups to track your progress. Practice proper position and breathing, and pressing the trigger while imparting minimal force upon the rifle. These things will make you more accurate. Practice shooting and dry-firing from your bipod and tripod in various positions, but don’t slack on the basics. Give each shot value, and try to break a perfect shot every time.

Aside from polishing up on the fundamentals, the most significant factor that you can practice for are steep shots. You will rarely be shooting on a level plane, with your shots going either steeply up or downhill. Many contemporary rangefinders will compensate for the angle of the shot to give you a corrected, “ballistic” distance at which to aim, but you need to practice with your rifle if you are able. Uphill shots in particular can be more challenging than they seem, and developing a familiarity with your positioning and what you can expect out of your rifle can be critical.

As you find all your efforts and patience finally culminating in a shot opportunity, remember that those fundamentals you practiced will ensure your bullet goes where it’s supposed to. This is sometimes easy to forget in the heat of the moment. Take your time. Typically, on a mountain hunt, you have set yourself up with the advantage, ideally with a shooting position above the unsuspecting ram, billy, or buck. When an opportunity is at hand, it can be easy to rush and bumble in the excitement, but resist this with all your might. Even in situations that require you to act quickly, try to do it in as slow and calculated a manner as possible. Set your rest, take a second to slow your breathing, and only shoot when you are ready. Do not let a guide or buddy pressure you into taking too quick of a shot. Naturally, not every situation will give you time to dawdle, but keeping your nerve will pay off. If you can put someone behind a spotting scope to watch your impact, that is a huge advantage, too. It can help tremendously to know the exact location of a hit or miss.

Don’t try to force a shot that isn’t there. Even in a hurried situation, you know when you’re squeezing off a shot that you aren’t sure of. It’s not worth it. The only certainty is that all hell will break loose once that report echoes across the canyon, and you’d be surprised what opportunities that passing up a questionable shot can lead to if you have the self-control only to shoot when it’s right. I’ve had shots that I decided I needed to pass on, only to have the animal get up and walk closer to me, or move to a position where I could get much closer. Sometimes holding off on a questionable shot has forced me to hunt a little harder and ultimately get a shot at an even better animal. Watching an animal walk away might suck, but it’s far better than sending a shot you end up regretting.

If you do blow the first shot, resist the urge to start slinging bullets as quickly as you can. Apply the same principles as you do with every shot. Breath, re-assess your rest, quickly diagnose what happened, and if you missed, only take a follow-up shot that you’re confident in. If you happened to make a poor, wounding shot, take your time. That said, the need to finish what you started calls for a little more urgency. An animal that has been hit will often give you a good opportunity to put it down with a second shot. Lastly, look at the situation objectively, and stop shooting sooner rather than later. A wounded animal will often seek a place to lay down and rest, and that gives you a chance to get closer.

Mountain shooting is challenging, but not complicated if you put in the work. Keep practicing those fundamentals from different shooting positions, and you’ll be ready to make a once-in-a-lifetime hunt count.