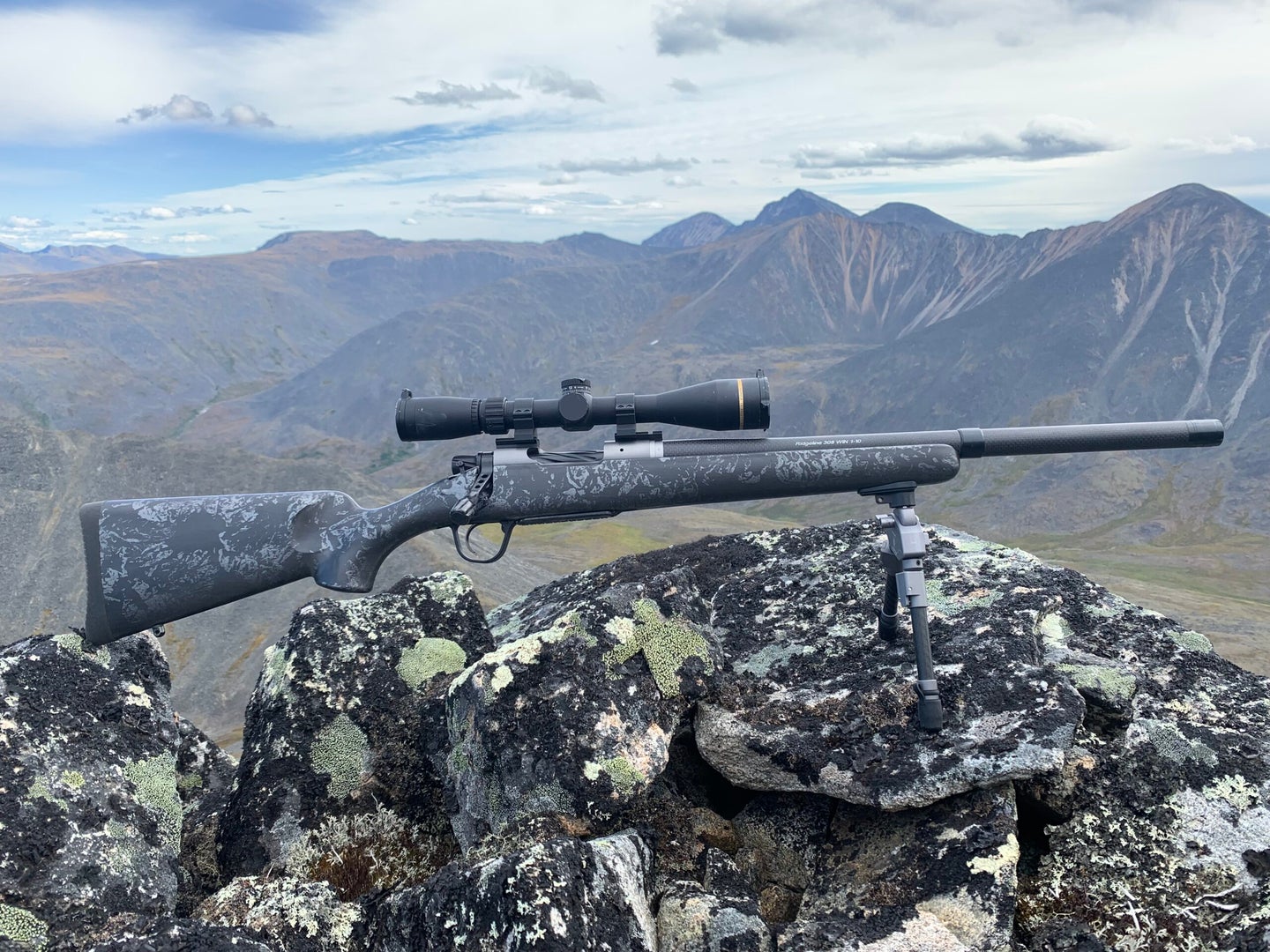 One of the most competitive fronts of the hunting rifle market is the ultralight category—a place that the new Christensen Arms Ridgeline FFT Titanium fits perfectly. The sub-5-pound hunting rifle is a field of its own, and only recently have more than a sprinkling of production rifles been this light. In fact, it was likely unfathomable to former OL shooting editor Jack O’Connor, who wrote about the desire for lighter hunting rifles to lug around the hills in his introductory story about the Winchester Model 70 Featherweight in the October 1952 issue of Outdoor Life.

“So these rumors of a light musket interested me vastly, not only because my own legs have been worn off halfway to the knees by lugging heavy rifles over sheep mountains, but because many of the letters I’ve had plead for a hunting rifle light enough to be transported by elderly characters without the aid of a dog team.”

For those pursuing sheep, goats, and other high-country game, 99 percent of a rifle’s function is to be carried around until it’s time for the shot, then carried back out again. Because of this, ultralight rifles have great appeal, and many hunters will do anything to cut ounces from their backcountry loads. Having lugged many standard production hunting rifles over sheep mountains myself, I can assure you that an ultralight rifle like the Ridgeline FFT Titanium is worth having.

This addition to Christensen’s Ridgeline series is new for 2022 and features a titanium receiver, carbon-fiber/stainless-steel barrel, titanium muzzle brake, and proprietary FFT parts, such as the stock, bolt knob, and magazine floorplate. It is offered in nine chamberings: 6mm Creedmoor, 6.5mm Creedmoor, 6.5 PRC, 6.8 Western, 28 Nosler, 7mm Rem. Ma.g, .308 Win., .300 Win. Mag., and .300 PRC. I tested the 20-inch-barreled .308 Win., which weighed in at 4 pounds, 14 ounces bare.

Breaking the 5-Pound-Mark with the Ridgeline FFT Titanium

With their notable use of carbon-fiber-wrapped barrels and other cutting-edge components, Christensen Arms has been cutting weight from their rifles for a long time. The new Ridgeline FFT Titanium is their lightest one yet. In fact, it’s a full pound lighter than the nimble Ridgeline Scout that we reviewed earlier this year as part of the Best Hunting Rifles of 2022.

How does the Ridgeline FFT Titanium break the 5-pound-mark? The biggest weight cuts in a rifle typically come from the biggest components. Carbon-wrapped barrels allow for larger diameter-to-weight ratio (and often handle heat better) than their pencil-thin all-steel counterparts. A titanium action is also a significant source of weight savings. Third, the new FFT stock only weighs 1 pound, 2 ounces, it’s about a pound lighter than Christensen’s other carbon-fiber stocks.

Other features that reduce the mass of the Ridgeline FFT Titanium are the fluted bolt body and skeletonized bolt handle. Even small components like the FFT carbon-fiber bolt knob and magazine floorplate nickel and dime the overall weight down to an impressive minimum.

The “FFT” of the Ridgeline FFT Titanium

Christensen’s FFT technology is new for 2022 and stands for Flash Forged Technology. They are being discreet about the workings of this proprietary carbon-fiber crafting method, but Christensen claims that not only does it produce stronger, lighter stocks, it is a zero-waste process, using carbon-fiber scraps, waste, and trimmings to create strong new parts.

The Ridgeline FFT Titanium features three main FFT components, the stock, bolt knob, and magazine floorplate. Christensen has already been making carbon-fiber components such as the cheek rest and float tube on their MPR and MPP series, but the FFT parts are notably different. The standard carbon-fiber that Christensen uses has a tightly-woven pattern, but the appearance of the FFT components is more like oriented strand board, which is made of many small flakes that are glued or forged together to create a strong, machinable end product.

Fit, Feel, and Finish of the Ridgeline FFT Titanium

The Ridgeline FFT Titanium is slender with a futuristic finish. The base color of the stock is the natural black color of the carbon-fiber shell. It has a slight sheen and lacks the tight woven pattern that many carbon-fiber stocks display. The surface of the stock is painted with a sponge-blotched pattern of metallic silver for a bit of texture. I like the look, but it’s slick, and many mountain hunters would likely prefer a slightly tackier texture. The stock-to-metal fit could be a little better, particularly at the tang. The inletting gaps around the free-floated barrel are also slightly uneven.

The FFT hinged floorplate and bolt handle cut some weight and are nice touches. The carbon-fiber magazine floorplate fits very well and takes little effort to open—unlike many production steel floorplates. Being somewhat obtrusive, the bolt handle is a natural wear-point and any rifle that’s used hard in the mountains and strapped onto backpacks will get some grinding on the bolt handle. I notice some on mine, however, metal bolt handles have the same issues, and one can always replace it if it gets too chewed up for their liking.

My Ridgeline FFT Titanium is well balanced and wonderfully handy with its 20-inch barrel. The stock is slim and very comfortable to carry and shoulder. The pistol grip is also slender but strong, and the geometry allows me perfect finger placement on the trigger. The rifle has a 90-degree bolt throw, and although I can detect a slight stickiness of the action—a trademark of many titanium actions—it’s not as noticeable as some of the other titanium actions I’ve worked.

Under the Hood of the Ridgeline FFT Titanium

Like other Christensen Arms rifles, the centerpiece is the Model 14 action—this one being made of titanium. The Model 14 action is a Remington 700 clone and features a Triggertech trigger, and a ring recoil lug that’s held in place by the barrel. My sample in .308 Win. is a short action with an expanded ejection port—another common trait of the Model 14 receiver. The two-lug, push-feed bolt is also akin to the Remington 700 but features an M-16-style extractor.

The stock is the most innovative component of the Ridgeline FFT Titanium, as it provides strength and rigidity while cutting weight. The action is secured in the stock by two action screws at 65-inch-pounds of torque, and disassembly reveals a single-piece billet aluminum trigger guard and magazine base with the FFT carbon-fiber floorplate.

The stock’s core is rigid, closed-cell foam, encased in the FFT carbon-fiber shell. Foam is visible in the magazine well, and in a cutout that’s used to glue the sling swivel stud mount into the fore-end. There are small amounts of glass bedding around the recoil lug, and along the side of the stock, to the right of where the trigger housing sits. Key features of the stock are the two stainless-steel bedding pillars through which the action, stock, and bottom metal are secured. The bedding pillars are the connection through the foam core and prevent deformation. Although aluminum bedding pillars are common (and lighter), stainless-steel is less prone to thermal expansion. This provides a more consistent connection and pressure in the action through a wide range of temperatures.

The Christensen Arms Ridgeline FFT Titanium in the Mountains

There’s no better test of an ultralight mountain rifle than to take it on a DIY sheep hunt, so that’s exactly what I did. Although I didn’t squeeze the trigger on this hunt, I packed the rifle for 14 days through some gnarly country. I found it to be very comfortable to carry, whether strapped to my pack or in-hand. Many rifles can put a bullet through a sheep’s ribs, but one that is comfortable to carry makes things that much easier.

I don’t care for muzzle brakes on light-recoiling cartridges like the .308 Win. for hunting, so I removed the factory 3-baffle brake and replaced it with a thread protector for my hunt. To use my favorite ultralight bipod, I also replaced the front sling swivel stud with a Spartan Precision Bipod/Tripod adapter. I topped the rifle with a Leupold VX Freedom 4-12x40mm CDS scope, and chose Federal Premium 175-grain Terminal Ascent loads for the trip. Over-scoping an ultralight rifle is essentially negating the weight savings, and that VX Freedom weighs just a couple ounces more than the VX2 2-7x33mm CDS scopes that I’ve preferred on my sheep rifles for years.

As a rule, light rifles are inherently more difficult to shoot accurately—and less accurate in general. Their feathery builds not only make them more subject to the input of human error, but thifle barrels also tend to heat quickly—and not handle that heat well. Despite this, the Ridgeline FFT Titanium comes with a 1-MOA three-shot accuracy guarantee.

As set up for my sheep hunt, the rifle averaged under 1 MOA with three-shot groups of the Terminal Ascent factory loads. I practiced with the rifle out to 650 yards and almost always made first round hits. The crisp break of the trigger helps on such a light rifle, and it was comfortable to shoot with both a bipod and from improvised shooting positions. I found the Ridgeline FFT Titanium to load and cycle without issue.

For more extensive accuracy testing after the hunt, I replaced the factory brake and fitted the rifle with a Leupold Mark 5HD 3.6-18. I recorded 26 five-shot groups at 100 yards and tested 11 different factory .308 Win. loads. I found that the rifle favored some loads and didn’t shoot others well at all. For loads that the rifle favored, I fired more groups to see what potential the rifle had.

The two most accurate loads for my Ridgeline FFT Titanium were Federal Premium 175-grain Terminal Ascent and Remington 150-grain Core-Lokt Tipped. Both averaged 1.22-inch five-shot groups and the first three shots of each group typically satisfied the three-shot 1-MOA guarantee.

For an overall accuracy rating, I took the top 10 five-shot groups I recorded, which averaged 1.14 MOA.

Although the accuracy didn’t knock me off my seat, it’s quite good for such a light rifle and completely suitable for any mountain hunt I have been on. Its accuracy is more consistent than what many of the ultralight rifles with pencil-thin barrels can maintain through five shots.

Read Next: Alaskan DIY Hunter Tags the Ram of a Lifetime

What the Christensen Arms Ridgeline FFT Titanium Does Well

The Ridgeline FFT Titanium is as light as factory mountain rifles come. It’s well-balanced, easy to carry, and comfortable to shoot. It has durable components, excellent grip-to-trigger dimensions, and handling characteristics.

Where the Christensen Arms Ridgeline FFT Titanium Could be Better

The stock-to-metal fit and the uneven inletting around the barrel could be improved.

Chasing the ultralight rabbit is a game of sacrifice for rifle makers, and I think that Christensen Arms did a good job on this rifle. They minimized weight where it isn’t needed while maintaining performance—something that isn’t easy.

While I hoped that my sample Ridgeline FFT Titanium would average sub-MOA five-shot groups—it nearly did—I can’t complain about that accuracy from such a light rifle. Many competitors in its field will open to 1.5 or 2 MOA with 5-shot groups, so don’t let it be a distraction.

Overall, the Ridgeline FFT Titanium is a fine, handy rifle, and although more expensive than your average shelf-gun, you’re getting appreciable quality for your dollar.