How to Preserve Your Wild Game When the Power Goes Out

Canning, curing, and smoking could save your stash of wild game 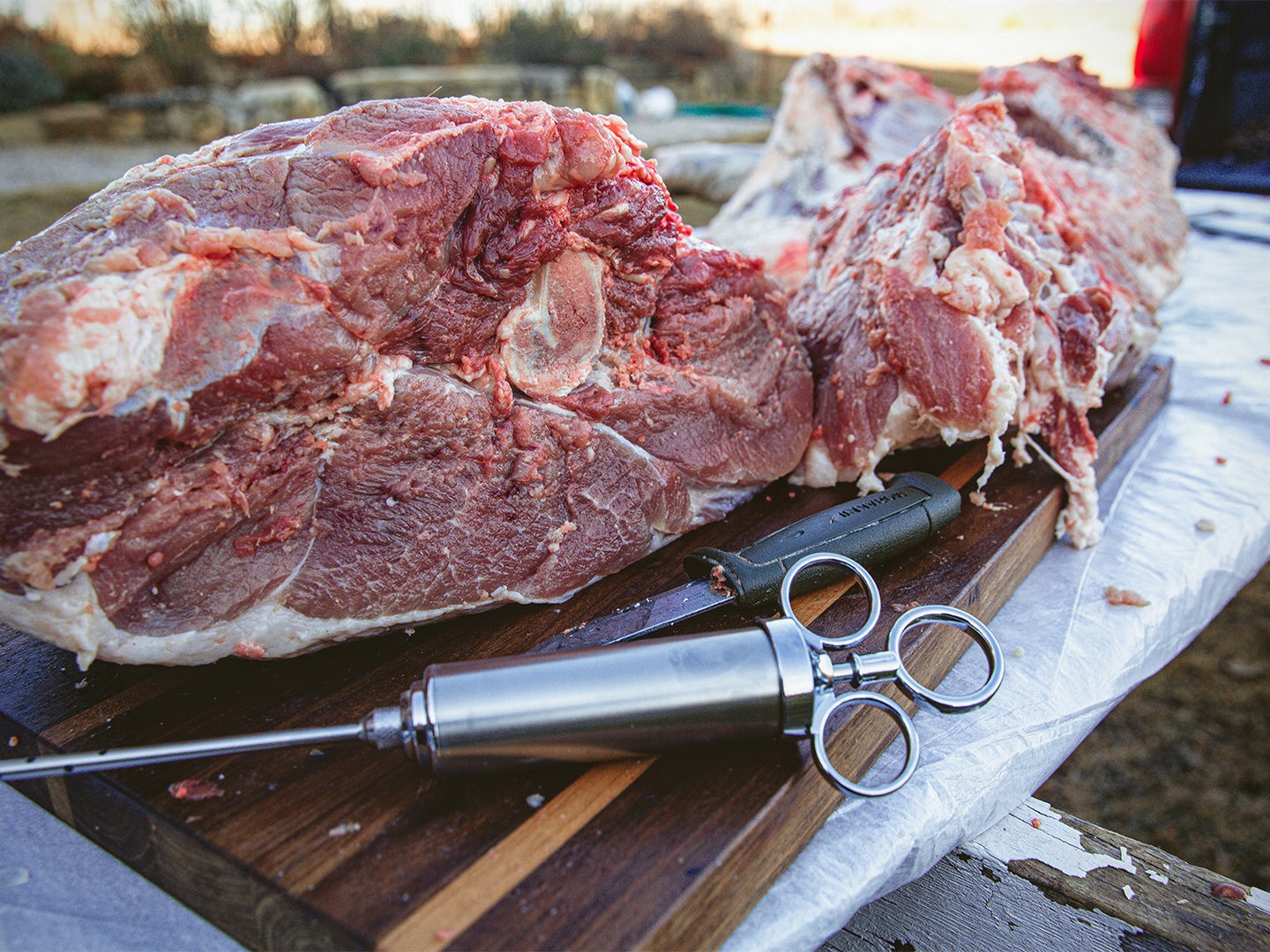 A freezer will keep game for about 48 hours without power. After that, you've got some decisions to make. Jack Hennessy
SHARE

What happens to all your hard-earned game if the power goes out for an extended period of time? During COVID-19 shutdowns, we got a brief glimpse into the precarious nature of the every-day services that we rely on. Meat aisles and toilet paper shelves were pillaged and left barren. “One-person-customer” signs were plastered across stores and a sense of panic permeated a large segment of our country.

For many of us hunters and anglers, we were likely less worried. But maybe you did count the mason jars in the cupboard or the propane tanks stacked in the garage?

Many of us who get our food from the land and the wild critters it grows tend to have a greater understanding of how to survive without modern conveniences. However, being truly self-sufficient is much more challenging than it may seem.

And here’s the thing, it doesn’t have to be an apocalyptic scenario you’d see on TV. It could be something as simple as a severe thunderstorm and heavy winds that knock out electricity. My parents live south of Chicago and were without power for seven days earlier this year after a bad storm. Most freezers are safe for about 48 hours. So what’s the first step when approaching the 50-hour mark? Start by assessing your access to the following items.

A 20-cubic-feet chest freezer may require 350 watts to power it. Portable generators can cost as low as $500 and generate 3,800 watts, making them capable of powering more than one freezer, but these portable generators also require maintenance, some after running for only 100 hours. You may need to change the oil and oil filters, replace the air filters, and change the starting plugs. On top of this, obviously fuel – in the form of either gasoline or propane – is required. The average 5,000-watt generator will require 18 gallons of gas to run 24 hours.

If storing large quantities of gasoline and/or propane (you can have a professional tap into the gas line that feeds your water heater and stove, but in a major disaster the gas might go out too) along with maintenance parts and supplies isn’t an issue for your home setup, a generator is obviously worth considering when you’re sitting on hundreds of pounds of wild game.

Home backup generators are also an option but are certainly more expensive than their portable counterparts. They too require maintenance for extended use.

It’s worth noting that FEMA has many documented incidents where power went down in several locations and chaos ensued at gas stations as generator-owning civilians lined up in droves to fill cans. Fuel can get scarce when emergencies arise.

Should you make the decision to pull meat from your freezer due to an extended power outage, there are a couple essential aspects to defrosting in order to avoid bacteria growth (this also applies to defrosting meat under any circumstance). Meat, when properly defrosting, should be submerged in cold running water, or cold water (ideally 35-40 degrees Fahrenheit) replaced every half hour. For freezers full of meat, this may mean defrosting it in your bathtub.

If you own a gas stove, yes, you will likely still be able to use your gas stove, though you’ll need to light it with a match or lighter. However, in a major disaster or serious emergency, it can be assumed if power goes out, more utilities are sure to follow, and that includes gas and water.

Seasoned firewood is wood cut and split into logs and allowed to rest as such for 6 months up to 2 years, in some instances. Unseasoned wood burns at a cooler temperature, resulting in incomplete combustion, more smoke, and dangerous creosote build-up in chimney or any enclosed fireplace or pit. Bottom line: If your property space allows for it, you should keep a cord or two of wood on hand, versus looking to cut wood on an as-needed basis.

Read Next: Smoking Meat and Fish for Flavor and Preservation

The Rule of Thirds

Many homesteaders liked to diversify their food supply into thirds: dry goods, canned goods, and frozen meat. This would mean, for us hunters, we would need to take half the meat in our freezer and either can or turn into jerky. Jerky, when properly cured, dehydrated, and vacuum-sealed can last two to three months in a cool, dry place since the use of nitrites and the absence of moisture delays bacteria growth. Properly canned meat can last two to five years in a cool, dry place.

My family and I put away a few deer and dozens of birds each year that fill one to two chest freezers. It doesn’t make sense for me, both in terms of fuel storage and cost, to invest in a generator. Instead, when COVID shutdowns hit, I ordered 48-quart-size Ball mason jars from Amazon for $93. The cost of those has more than doubled since, but my logic was simple: Should we find ourselves at risk of losing power to our freezers for an extended period of time, I was ready to crack knuckles and get canning.

Let me be clear: You NEED a pressure canner, not just a canning pot, to safely can low-acidic foods (i.e., meat). I invested in a 23-quart Presto pressure canner that I found at my local Ace Hardware for about $90. Other pressure canners go for much more, but this one gets great reviews and doesn’t break the bank. Please note, having a pressure gauge is also a must (this model came with one).

I don’t want to get into specifics regarding the steps of pressure canning because different pressure canners call for different instructions. In an effort to provide some context, however, I will briefly outline what is necessary and how to know if you sealed your meat correctly.

I own an electric stove (the tribulations of not being a homeowner), so I invested in 15-pound tanks of propane as a backup plan. One 15-pound tank may last 18 to 20 hours and it takes approximately 2 hours of using my Camp Chef Sidekick burner to properly can meat. My 23-quart Presto pressure canner can accommodate 7-quart jars, as ample space between jars is necessary inside for heat and pressure to work its magic. So some quick math: If I have two 15-pound propane tanks and if I efficiently manage my canning process, I can easily can 126-quart-size jars for a total of 3,528 ounces (or 220.5 pounds) of meat. Two tanks at 18 hours apiece with two-hour canning time allowing for seven jars at a time, which would likely contain 28 ounces of meat to save an inch of headroom in jar.

A quick overview on canning meat: Make sure mason jars are clean and hot and/or steaming right before canning. I run them through the dishwasher and leave the inside to steam prior to use, but without power I would likely boil in a pot and leave in 180- to 200-degree water. Wipe rims to make sure they are clean, as any bit of anything on the rim can cause seal to fail. Remove as much fat, gristle, fascia—anything but muscle—since fat and other non-muscle parts can oxidize quicker and spoil meat. Cube meat and put in mason jars. Add a tablespoon of kosher salt overtop. Hand tighten lids. Follow the pressure canner’s instructions for canning, which involves allowing steam to blow from vent prior to placing vent regulator atop and letting pressure build.

My Pressure canner calls for 90 minutes at 11 psi for meat, though I prefer to keep it at 12 psi (a little leeway should I notice pressure dissipating). Side note: I had a friend in grad school burn herself really badly from a pressure canner—they’re not to be taken lightly.

On my outdoor propane grill, I can usually keep the setting at medium for 90 minutes, after heating on medium-high to release steam for 10 minutes (again, read your instructions, please). I let mason jars cool for 12-24 hours and if I press on the lid with no pop, it means I’ve sealed the jar correctly. If there’s a pop, similar to sound heard prior to canning, that meat goes in the fridge and gets eaten within next few days.

But if I run out of propane, or absentmindedly forget to refill tanks, I would need to rely on firewood. Ozark Trails and Camp Chef both make grates to go over a fire, upon which I can set my pressure canner. Although managing a fire to maintain proper pressure for 2 hours is difficult, it is possible. If pressure dips below 11 psi, I have to start the timer (90 minutes) all over again.

Remember, thin smaller logs burn hotter and quicker, while large thick logs burn slower. It may be necessary to create a two-zone fire (fire one side, less of a fire on other side), and, while wearing gloves, move the pressure canner to cooler zone if pressure should rise too high (20 psi is caution zone for mine).

These would be last-resort methods since each have so many variables. Curing occurs through the addition of salt, which draws out moisture from the meat, making it more difficult for bacteria to grow. Pink salts containing nitrites aid preservation through repressing growth of pathogen agents like botulinum, E. coli, and salmonella. All that is great but to properly and safely cure meat temperatures in the range of 35-40 degrees Fahrenheit are necessary.

For example, the Bearded Butchers, two brothers in Ohio who have gained notoriety through their butchering videos on YouTube, inject their hams with a brine containing celery powder (organic nitrites) and salt and allow to cure for 7-10 days, but in refrigerated conditions. Using just salt, traditional curing calls for weighing the meat then packing it in salt equal to 3% of its weight. Over the next few days, in temperatures ranging from 35-40, it is necessary to rotate and rub the salt over the meat a few times per day. Curing is finished when all salt is absorbed (it’s best to still rinse off afterward).

So, depending on your climate or season or whether you have underground shelter with cooler temperatures, properly curing meat may not be possible.

During the 19th century, sailors embarking on long voyages survived on biscuits, dry goods, and “salt meat,” which was exactly what it sounds like: very lean meat packed in barrels of salt and cured to the max with a mix of salt and saltpeter several days ahead of time. Our stomachs today, more than likely, would not be able to withstand a diet of this (but perhaps there may come a time when we all need stronger stomachs).

Cold smoking is one step further in the curing and preservation process. It involves utilizing the constant flow of smoke in an enclosed space with temperatures typically ranging from 68 to 86 degrees Fahrenheit. The process can last days but the smoke, when applied to a pellicle (thin tacky layer of salt residue or something else on exterior of meat), will slow oxidization and may preserve meat for two to three months. However, the U.S. National Center for Home Food Preservation does not recommend attempting this at home, and even goes as far to suggest anyone attempting to cold smoke should be certified in HACCP (Hazard Analysis and Critical Control Points).

All that being said, the preservation method of cold smoking predates refrigeration by hundreds of years, if not much longer, well before any sort of certification was required. If things went south, you probably wouldn’t be worried about proper certifications.