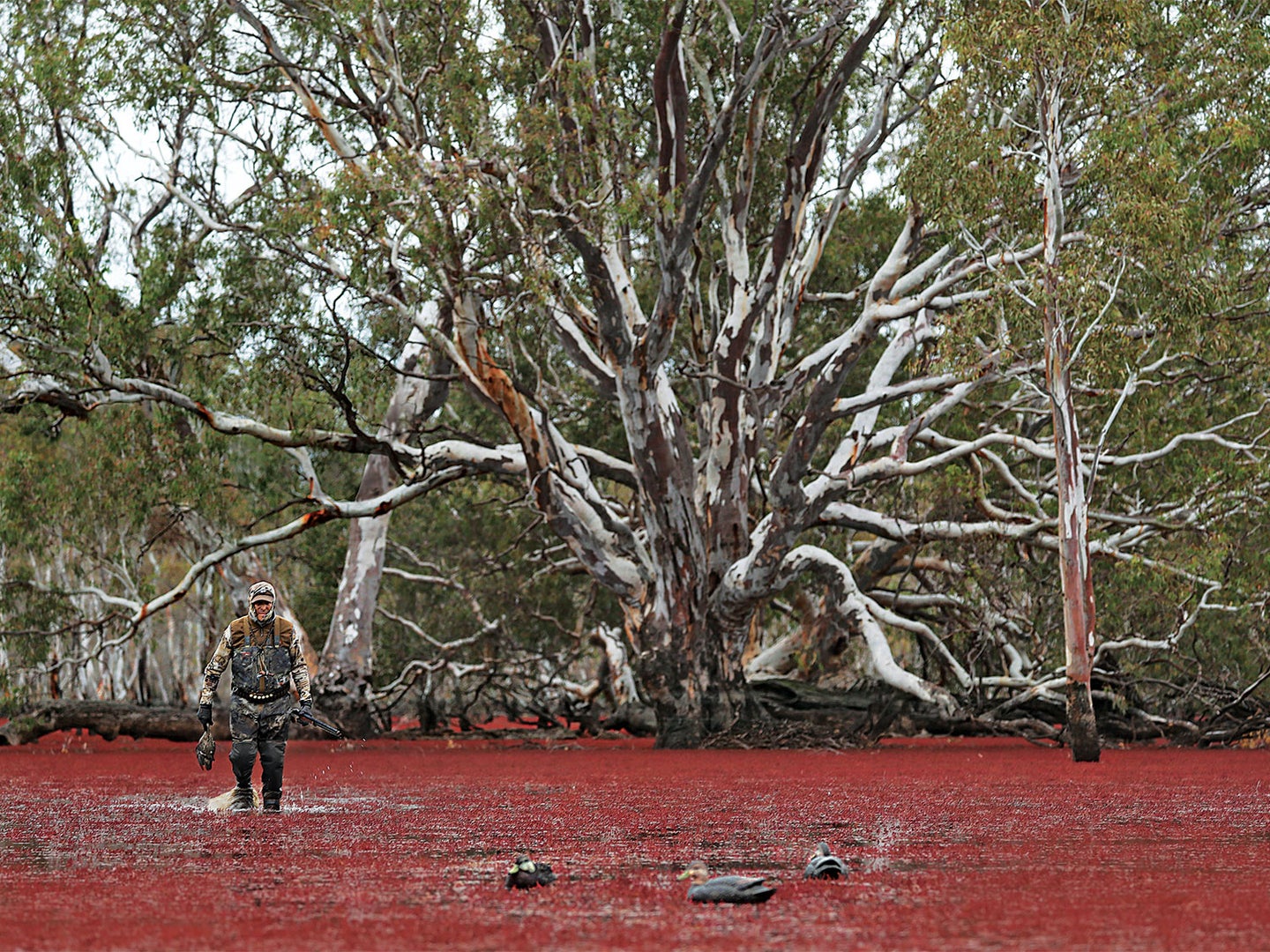 It’s 5 a.m., and we’re barreling down a dark highway in Obregon, Mexico. Russell, 53, is explaining how it would be easier to sell used cars than the international waterfowl hunts he deals with in his current gig as a booking agent (though he hates that term). I’m pretty sure he’s only half kidding.

“People go in to buy a car, and they know what they want,” he says. “Me, I’ve got to sell the experience.”

Later that morning, a handful of other writers, some reps from Benelli, and I enjoy the most epic pintail shoot I’ll ever be a part of. Drakes in their breeding plumage, long sprigs trailing behind, float out of the clear-blue sky and cup into a decoy spread set along a tidal beach. Tucked into a mangrove blind, my hunting partner and I take turns shooting until we have our limits, then we sit back and watch the spectacle of teal, wigeon, pintails, redheads, and shorebirds whip down the shoreline. By the time we get picked up for lunch, we’re sold on the Ramsey Russell experience.

We’re here on the west coast of Mexico hunting wintering ducks thanks to Russell’s connection to Frank Ruiz, an outfitter who turned his family home into a hunting lodge.

Russell sends his clients to outfitters like Ruiz all over the world. Classic wingshooting destinations such as Mexico and Argentina are entry-level trips for Russell’s hunters. Think more exotic: shelducks in Mongolia, garganey in Azerbaijan, barnacle geese in the Netherlands, red-billed teal in South Africa. Russell hunts all of these destinations before he sends clients to them.

Not all of his trips are high-volume shoots like the one we experienced in Mexico. On an Alaska king eider hunt, for example, you shoot only a few ducks per day. What all of Russell’s hunts have in common, though, is that they are a blend of adventure travel and species-collecting expedition.

And the trips are not as expensive as you might think. An average hunt costs about $6,000, which isn’t chump change, but it’s still cheaper than almost any international big-game hunt, Russell reasons on our drive back after the morning shoot. His mission is to create a passion (and a market) for adventure waterfowl hunting. He wants to foster a shift away from the posh international hunt clubs.

“These are duck hunts for real duck hunters,” Russell says. “You’re not traveling around the world to smoke fat cigars and eat edible art. You’re going to hunt. If you want all that other shit, take your wife to Italy.”

Like any great outfitter, guide, or booking agent, Russell can cut up with a group of new hunters as if they’re old buddies. He knows that if a hunt isn’t going well and tensions are high, a good joke or witty story can save the day. Over the years, he’s developed an arsenal of quips:

“My favorite duck is the next one over the decoys”—for when pintails aren’t working, but shovelers are dive-bombing into the decoys.

“I’d agree with you, but then we’d both be wrong”—for defusing an argument with a client.

“It’s like walking through the pages of National Geographic with a shotgun”—for selling the idea of a hunt in a far-flung destination.

Russell was born in Mississippi, where his grandpa taught him to love hunting and fishing. He was tagging along on dove hunts at 8 years old. Soon enough, he was immersed in the world of duck hunting Mississippi River backwaters. Then, when he was 15, Russell was nearly killed in a freak accident. He was cleaning a paintbrush with gasoline when a water-heater pilot light caught the fumes and erupted in a fiery explosion. Russell suffered second-­ and third-degree burns on three-quarters of his body, but he beat the 8 percent chance of survival the doctors gave him.

Most of us save the concept of “bucket-list trips” for the twilight of our hunting career. We’re only willing to roll the dice once we acknowledge that time is running out. But Russell faced his own mortality when he was a kid. During a long, torturous recovery, the teenager forged a saying that became his personal creed and would later become his business slogan: “Life is short, get ducks.”

Eventually, Russell earned a forestry degree and landed a job with the federal government. When he worked up enough scratch, he started traveling to hunt waterfowl in Canada and Argentina. He made his first international trip to Saskatchewan in 1998.

Russell has the ideal temperament to captain a crew of duck hunters. He’s intense enough to make sure everyone brings their A-game (“Turn off the damn phone and play for keeps”), but he’s also experienced enough to know that the whole point of the thing is to have a good time—and he’s unabashed about his love for shooting ducks (“Hell yeah, shooting ducks is fun, and hell yeah, it’s conservation”). So, Russell had no problem recruiting buddies to go with him abroad. He started bringing so many other hunters along that an outfitter convinced him to open a part-time booking-­agency business. Then, in 2010, Russell went full-time with his site, getducks.com.

Russell has learned some straightforward lessons during his world travels: Don’t drink the milk in Pakistan, and keep your firearms documentation on your person when you go through customs in China. But the biggest takeaway cuts deeper, to the culture of American waterfowl hunting. Generally, we kill fewer ducks per hunt than you can almost anywhere else in the world, and yet we’re the ones obsessed with numbers.

That’s because the strict limits on how many ducks and how many of each species we can kill forces American waterfowlers to be careful counters. Each dead bird is one notch closer to a limit. A full limit means the end of the hunt, and complete success.

As Russell says: “It’s almost like if you only shoot three ducks, you lost. It’s made to feel like if you’re not killing a limit, you’re not having fun.”

Of course, these limits are good and necessary for conservation. In the U.S., we have much higher hunter-density numbers than in other parts of the world. There are about 1 million U.S. waterfowlers. In comparison, only a few hundred Americans travel to the Yaqi Valley in Mexico to hunt ducks each winter, according to Russell. Those few hundred hunters end up harvesting a statistically insignificant number of ducks, even if they’re bringing back a whole pile of birds each day.

In the rest of the world, waterfowl hunting for sport isn’t as common, and neither are limits or hunting pressure. In some corners of the world, you set your own limit. One of Russell’s hunts in Pakistan drives home the point.

He was invited by a feudal lord to hunt a sprawling marsh along the Indus River (one of the longest rivers in Asia, which serves as a major flyway). The lord had heard that the American was a crack shot, so he made his way down to the blind to watch. He gave Russell a few boxes of shells from his personal stash—German-made, 3-inch lead loads—and insisted that Russell take long shots that most American hunters would consider sky blasting.

“If you want to hunt in Pakistan, you must shoot like a Pakistani,” the lord said.

So, Russell started burning through shells, and once he got the long lead figured out, birds rained from the sky. Russell wasn’t counting but figures he killed more ducks that day than most American waterfowlers shoot in a season. Each bird was recovered diligently (meat doesn’t go to waste in Pakistan), and Russell was immersed in a totally different hunting culture. To the Pakistanis, the most important aspect of the hunt was shooting ability.

The upshot? You can’t travel halfway across the world and expect locals to have the same hunting values as you do.

And over time, Russell’s clients have developed new hunting values.

“In the beginning, the number-one question clients would ask is, ‘How many ducks can I shoot?’” Russell says. “Now hardly anyone asks that. Now everyone wants to know which species are present and what the experience is going to be like.”

But no matter how far you travel, in many ways duck hunters are all the same.

“Mallards are the big prize bird anywhere they exist in the world,” he says. “It doesn’t matter if it’s Mongolia or Missouri.”

Many times, Russell hunts with locals who speak a different language from him. This minimizes the small talk, but they still communicate through hand signals and gestures in the duck hunter’s common language: Fix the hide, the ducks are flaring; tweak the spread, they’re not committing close enough; good shot, here come some more birds.

“You can put four people from anywhere in the world together in a blind, and they’ll have more in common than they’ll have differences, because they’re hunters.”

On our last day in Mexico, we opt to hunt Pacific brant in a tidal flat of the Sea of Cortez. Shortly after sunrise, the birds beeline for our decoys, low and tight, flying like giant black teal in slow motion. After two volleys, Russell’s 9-year-old Lab, Cooper, has a pile of retrieving work to do. Cooper is a registered service dog, and she’s traveled the world with Russell. This is the last big tour of her career. Next, we head to a backwater to hunt teal, and for the first time, Russell sets aside his shotgun.

As we pick off teal one at a time, Cooper methodically plucks our birds out of the marsh. She needs no direction from Russell, and is mostly too deaf to hear him anyway. She retrieves because it’s in her blood. It’s what she’s always done.

Meanwhile, Russell contemplates the future of waterfowling. He plans to target millennials with his international duck-­hunting trips. This demographic has proven willing to spend more on travel than any other expense. He’s banking on the idea that the groups of hardcore young guns you see patrolling the goose fields of every Midwest town will one day want to chase birds in Canada, Mexico, or Russia. Getting this next generation of hunters excited about waterfowling and conservation on a global scale, he hopes, will be his legacy.

“Someday, I don’t want my headstone to read, ‘Here lies Ramsey Russell: One million dead ducks,’ ” Russell says. “There has to be more to it than that. Don’t you think?”