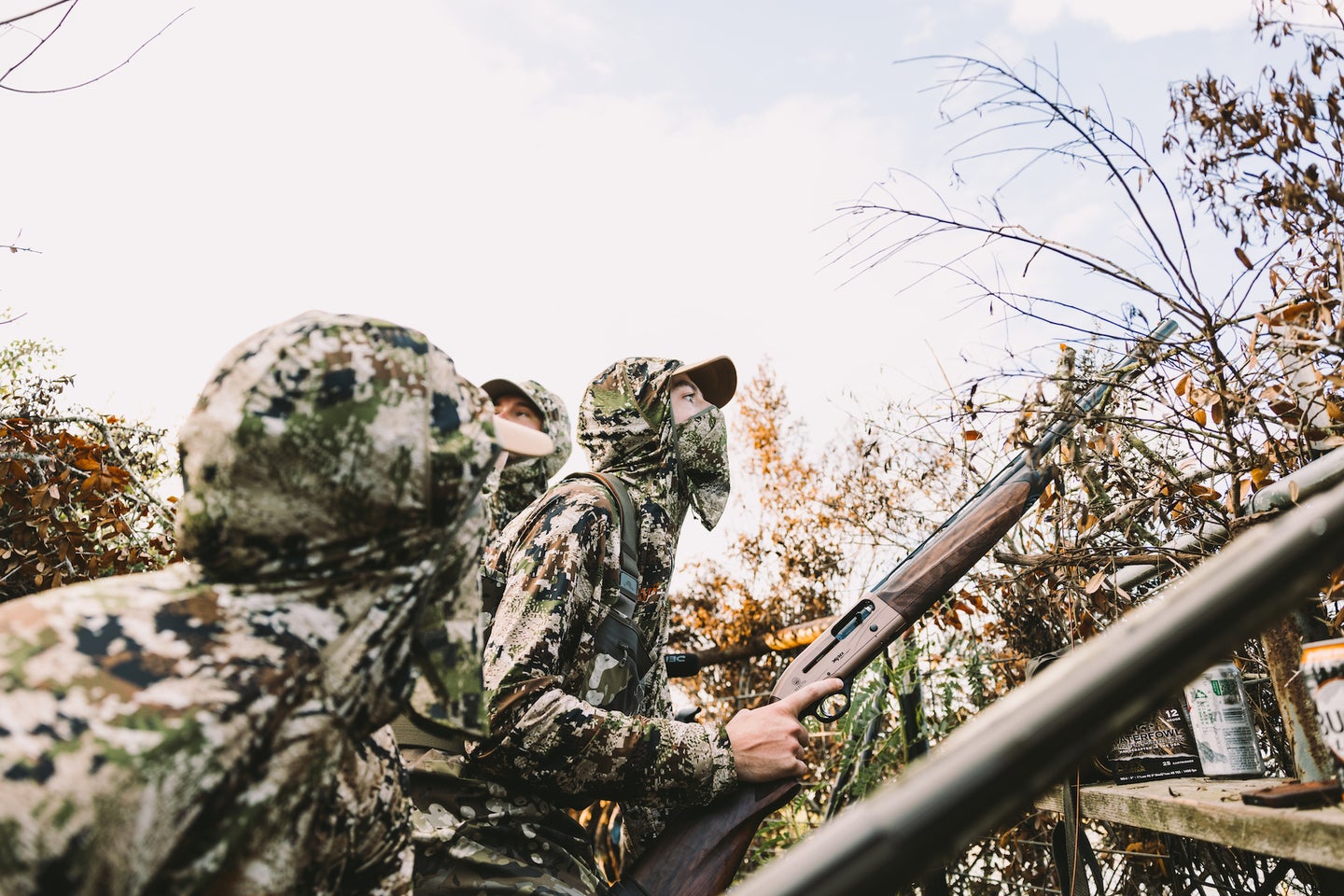 Some would say that if you aren’t a very experienced duck hunter, you should go into your first early-morning hunt of the season clear-headed and well-rested. I did not heed this advice.

Standing around a 2022 Can-Am Defender Max Lone Star in the darkness with the four other guys in our group, I unscrewed the lid of a plastic water bottle and quietly drained it. Then I looked in the bed of the rig that held our pile of gear: shotguns, blind bags, camera boxes, coolers, a dog crate (occupied by a black lab named Reign), and three or four dozen Hydrofoam Blue-Winged Teal decoys from Heyday Outdoors. It was full, unlike my own head, which seemed light and off-kilter. My tongue, meanwhile, felt like it had grown a layer of fur—likely a side effect of the canned cocktails and beers that the muscle had over-marinated in the night before.

Driving out to our spot, the vehicle’s headlights lit our way along the dusty, gravel roads while a Turtlebox speaker played full blast from up front. The enclosed cab of the Can-Am became a small echo chamber, a shuffled mix of David Allan Coe and Ludacris drowning out the heartbeat between my ears. This was the medicine we needed. Hearing ourselves complain about hangovers would only make things worse. This was early teal season in Texas, after all, equal parts tailgate party and duck hunt.

When we finally backed the rig up to the blind, which sat at the edge of a small, flooded rice field, it was still 45 minutes before legal shooting light. It was time to get to work, and I quickly reminded myself of a lesson that was yelled at me on a dock years ago: “Get your hands out of your damn wader pockets and do something.”

So, I grabbed a dozen decoys and gave a clueless glance at J.J. Gustafson, our host and the Director of Business Development for Heyday Outdoors (formerly known as Lifetime Decoys). He took a quick 30 seconds to explain the layout of the spread and pointed me toward the right side. I walked into the water, sinking in the mud with each step, and meticulously tossed them out, one by one, into the shallows.

Then I looked back at J.J., who is by no means a small man. He stood on dry ground and unknotted a dozen decoys. “Some people ask us why we like to use a Texas rig,” he said aloud. Then he grabbed the bundle of PVC-coated steel cords with two hands, reared back and chucked all 12 of them into the air. The dekes untangled as they flew and then splashed down among the rest, landing in an indiscriminately perfect pattern. I walked back to the blind and considered myself schooled.

This would not be my last lesson of the day. It can be intimidating if you’re a rookie waterfowler to hunt with an experienced crew of duck slayers. But there are a few simple things than can help you shoot your limit, too.

Try to Forget About Your Audience

There was never a doubt we’d have opportunities that morning. A few lone teal had already buzzed over as we set up in the blind. I sat in the middle of the group on a stool and watched the birds disappearing as quickly as they revealed themselves in the pre-dawn light.

When the first group of ducks came in and J.J. yelled “Kill ‘em!,” I was more nervous than I cared to admit at the time. I know my way around a shotgun, and I grew up peppering doves and the occasional covey of quail as a teenager. But as a Central Texan who always hunted closer to home, duck hunting on the state’s Coastal Plain had always been a foreign concept. I was out of my element and surrounded by four guys who were very much in theirs.

I’m not even sure if I aimed at that first duck, but it definitely didn’t fall. Neither did the second nor the third. Ducks were dropping out there, sometimes three or four at a time, but I couldn’t take credit for a single one.

Finally, somewhere around the 20-minute mark, I made an easy shot on a duck that decoyed in the middle of our spread. The bird was hardly a moving target when I pulled the trigger, but that didn’t make it any less of a relief. I felt contentedly mediocre.

Five or six (maybe seven) shells later, when I dropped a fast-flying crosser, I had mostly gotten over the uneasiness that came with having an audience of crack shots on either side of me. Sure, they were killing the same birds that I struggled to hit, but they weren’t the ones making me miss. I was. Once I stopped worrying about the more experienced hunters judging my shooting, I started dropping ducks.

One of the big lessons I learned shooting teal that day had everything to do with timing. The ducks came in steadily throughout the morning, sometimes in pairs, sometimes in wads. But during the first hour of shooting, no matter how many birds I saw, each one seemed to surprise me.

My initial reaction was to try to shoot as quickly as the rest of the guys I was with (who were very quick on the gun.) This was mainly because waiting after the first volley meant there would be fewer targets in the air. But all this really did was throw off what should be a smooth gun mount, and more than once I ended up pulling the trigger before I had the 12-gauge fully snug on my shoulder.

After plenty of missed opportunities, I started to get back to fundamentals and remembered what it felt like to have my cheek solidly on the stock. But since I kept missing shots near the outer edge of the pond, I convinced myself that I should start waiting for the birds to flare up and pass directly over the blind. I figured the closer they got, the better my chances were. I couldn’t have been more wrong.

I missed every close shot I took that morning, and there’s something especially demoralizing about missing a duck that’s right in front of your face. Later that night, I brought this up to Guy Billups, a skilled trainer of British labs and the president of Wildrose Kennels in Texas, who was part of our group. After telling him that I couldn’t believe how many close shots I missed, he summed up the physics of how a shotgun load spreads over distance with one simple sentence.

“Well yeah,” he said with a smile. “At that point you’re throwin’ golf balls at ‘em.”

Breaking this down even further, most new duck hunters will be shooting a modified choke, meaning that shots at 20 to 30 yards are ideal.

Stay in Your Lane and Shoot One Bird at a Time

Going back to lesson number one, one of the things that helped me tune out the other shooters in the blind was narrowing my field of vision. This is easier said than done when a group of 30 birds comes in and pulls your eyes in all directions at once. But it is doable.

The more I stayed in my lane, focusing only on the ducks that were directly in front of me, the better I shot. I had fewer targets to aim for, which helped me focus and kept me from flock-shooting too much. Even the other guys who were going after doubles (I think J.J. might have tripled at one point) were aiming for one bird at a time. They were just able to transition faster from the first target to the second. I didn’t concern myself with any of that. If I could pick one duck out of the flock and kill him cleanly, I was happy.

Take What You Can Get (Including the Cherry Bird)

Whenever you’re on a good shoot, like we were that morning in Texas, there’s going to be a duck or two out of almost every flock that comes in first, hovers over the kill hole, and takes longer than all the others to get out. This is the cherry bird, the easiest of all to hit. Veteran hunters will often let the rookies kill this duck while they shoot the ducks on the outer edge of the flock, starting with the farthest birds that are still in range and working their way in. They know that the worst-case scenario is for five shooters to pop up and all target the same duck hanging over the kill hole, so they let someone else take it.

Sometimes rookies can make their limit by killing only these easy birds.

After an hour and a half of steady shooting, we were all pretty pumped. Maybe not as pumped as the two Labs, who retrieved duck after duck with a little guidance from Guy and J.J., but still. We had seen hundreds of teal that morning, breakfast wasn’t far away, and the post-hunt Coors Light waiting in the small cooler by my feet was starting to regain its appeal.

We had a couple more ducks to kill, and I was still whiffing on more birds than I was hitting. But considering that I had only burned through one box of Apex WS-3 shells and had five teal in my pile, things could have been worse.

Soon, everyone was limited out except for me.

When the next group of rice rockets came in over the decoys, instead of flaring and scattering in the sky, which happened about half the time that morning, they slowed down and backpedaled over the spread.

I pulled up and shot a hen that hovered just over the water. The duck fell but didn’t crumple, so I shot once more and that was the end of our hunt. Then I unloaded my gun and looked up at the cotton candy sky, acting like I’d done this all before.