How to Pluck a Duck 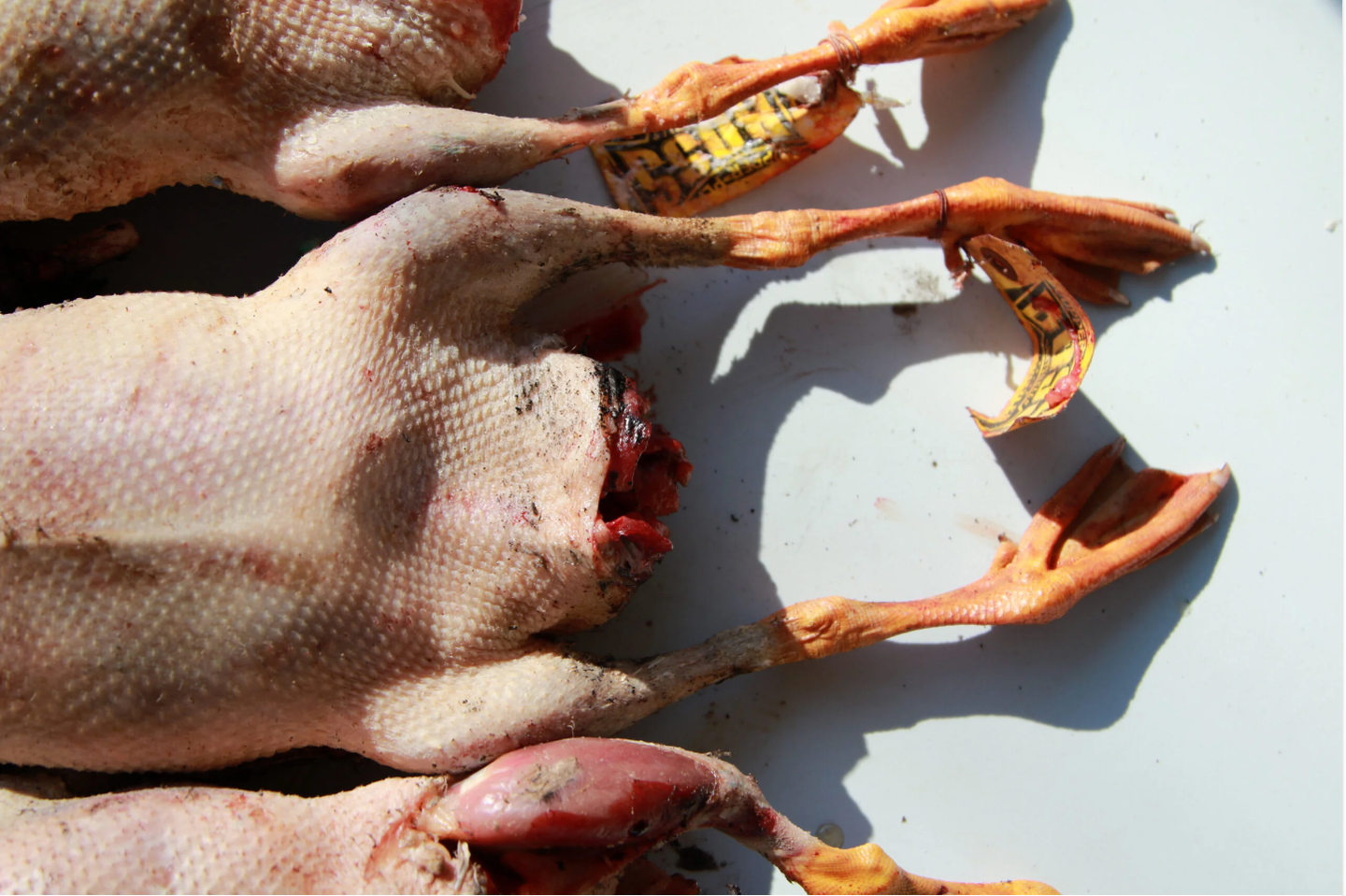 Plucking ducks and geese sets you up for better meals in the kitchen. Natalie Krebs
SHARE

Wild ducks are best cooked with the skin on. That means you’ve got to pluck off their feathers, which can be a tedious and time consuming task. The most straightforward way to pluck a duck is simply by tearing off the feathers (pull them against the grain) until the skin is clear and clean. There are better methods for how to pluck a duck, however, especially if you have a bunch of birds.

Try this wax-plucking method I learned while hunting specklebellies with Jonathan Wilkins of Black Duck Revival this winter. He demonstrated the method on specks, obviously, but it works just as well on ducks (or any waterfowl for that matter). The best thing about this method of plucking a duck is that it allows you to use all the meat from the bird.

“Why put in all that work only to take the breast meat?” Wilkins had said, shaking his head as he cleaned birds after a long morning of setting decoys and hauling gear. Here’s Wilkins’ process, adapted from a traditional Louisiana method, for how to pluck a duck.

Steps to Pluck a Duck Using the Wax Method

As with any cleaning method, wax-plucking has its pros and cons. It’s a bit messy, and a lot of work for just a few birds. But if you have a pile of geese or ducks to process, it’s surprisingly efficient once you get the hang of things. Not counting the ice bath, Wilkins can turn a whole goose into something worthy of a butcher shop in just a few minutes. It’s also oddly satisfying to remove big chunks of feathers to reveal a beautifully-plucked goose, ready for all kinds of recipes. Here’s how to do it yourself.

Prepare Your Workspace to Pluck a Duck

It will take a while for the water to heat and the wax to melt, so be sure to start this in advance. Set up a burner outside with a big pot, and use broken-down cardboard boxes to cover your workspace for easier wax cleanup. If you boil your own big-game skulls or have turkey-frying pot, the same set up works just fine. Fill the pot ¾-full with water, then add the paraffin wax as it warms. Wilkins used about five boxes of paraffin wax (1 lb. apiece) for the pot you see below (about 30 quarts), and added more as we worked. He recommends a ratio of one part wax to two parts water. Remember, you’ll need space for both the wax and dunking the bird, so don’t overfill the pot. Keep the liquid hot, but on’t let it boil. While you’re waiting for the wax to melt, fill the cooler with ice and hose water, and grab a trashcan for the feathers. Then start plucking.

Yes, the whole point of waxing the birds is so you don’t have to pluck them, but you’ll still need to remove feathers in just a few spots. Resist the urge to go too crazy here, Wilkins advises. You only need to pluck enough to give the wax purchase on the goose’s skin, and to give you a seam to start plucking.

Start by removing the tail feathers, then pluck a rough center line through the downy feathers up the front and back of the bird. This line should run vertically from the tail to the chest, and between the wings on the back. This line only needs to be as wide as the feathers you can remove in one pinch. Finally, pluck the wing feathers closest to the body, down to the first joint.

Gather the partially-plucked duck or goose’s feet in one hand, and the wings and the neck in the other. Lower the bird gently into the simmering wax, submerging the body as best you can. Lift it out, flip it over, and repeat. You only need wax on the body, so don’t waste wax on the wings, the head, and so on. If you have lots of birds to dunk, keep an eye on how much wax you’re using. It you start to run out, add more to the pot as you go. Too little wax on a bird won’t create the hard shell you need for easy feather removal. Keep track of this by watching the wax you squeegee off the bird (see below) and the thickness of the wax coating on the feathers as you remove each bird from the pot.

After you dunk the duck or goose, hold it above the pot and use the stirring stick to squeegee the excess wax and water from the feathers. This usually takes several firm strokes down each side.

Immediately dunk the bird in the ice bath. Try to keep the wings above the water, if only because it’s less slippery (and warmer for your hands) when you pin the wings down to remove the waxed feathers. Keep the bird in the ice bath for up to five minutes. It’s okay if the goose sits longer in the water while you’re working on other birds; you just need the wax to fully harden into a cool shell before you can remove it.

Peel Off the Wax

Once your bird is done cooling in the ice bath, remove it from the water and smack it on a hard surface a few times, just like a bag of gas-station ice. Pin the duck or goose by a wing, and use your other hand to dig away at the hardened feathers. The waxy shell should come apart in large chunks, peeling away in tectonic plates to reveal the feather-free skin. Work carefully around any shot holes in the body, as the fragile skin there tends to pull away with the wax and expose muscle below.

Read Next: How to Cook a Wild Goose

Remove the wings at the first joint, then take a propane torch or the burner on your stove to singe away the delicate pin feathers. Use a knife and cut around the bird’s tail. The goal is to remove the oil gland and cloaca while also creating a hole to extract the innards. You’ll need to cut through a few vertebrae, but avoid slicing through the intestine. Once the tail is removed, you can reach into the body cavity and remove the guts. Consider saving the hearts, gizzards, etc. until you have enough for future dishes, especially if you’re cleaning a pile of birds.

Bonus Tips for Plucking a Duck

If you need to transport the bird to its final destination, be sure to follow the regulations in your state. We removed the wings but left the heads on for easy identification and clean up later.

You can cut the legs off, but Wilkins used this handy trick on a snow goose to remove the feet and the leg tendons. After your bird is wax-plucked, snap the leg sideways at the joint and give it a strong twist. With some practice (I tried this myself with mixed results) you can pull the foot off with many of the tough tendons still attached, tidily removing them from the leg meat. Wilkins also throws the feet, which have lots of collagen, in when making stock with bird carcasses.