Made in the USA: Eppinger Lure Co.

In 1906, Lou Eppinger spent a month in the Canadian wilderness hammering on 2-ounce pieces of brass until they wobbled... 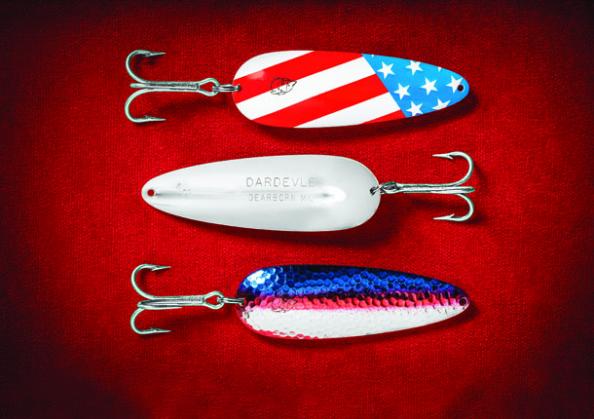 In 1906, Lou Eppinger spent a month in the Canadian wilderness hammering on 2-ounce pieces of brass until they wobbled in the water with authority and did not twist his line. Upon returning home to Detroit, his black-and-white Osprey quickly became popular with local anglers. In 1918, ads in Outdoor Life and Field & Stream magazines helped boost production from 1,000 units a month to 50,000.

That year, the Osprey was renamed the Dare Devil (the spelling was changed to Dardevle in the 1920s, “to ensure we were not offending any religious folks,” says national sales manager John Cleveland) and the devil-head logo was added. The lure has remained unchanged since, and it’s still the company’s best seller.

A Team Effort
In the late 1950s, Lou’s nephew Ed moved the plant from Detroit to Dearborn. Ed’s daughter, Karen Eppinger, now supervises 15 tight-knit employees (the average tenure is more than 20 years), each of whom can do any job in the factory. At 70, Karen ties squirrel hair and feathers by hand to more than 100,000 lures a year. In the winter, she packs nearly every shipment. When Jennifer Bustamante, Karen’s daughter, isn’t doing the books, she’s putting split rings on spoons. John Cleveland spends time in the paint booth.

While moving production to the Pacific Rim would make the family wealthy, there’s no joy in the thought. “Lou and my dad would haunt me,” says Karen. “We’ll never leave Michigan as long as any member of my family is alive.”