How to Catch Crappie Limits: 5 Tactics From the Pros

Catching a cooler full of slab-sided, good-eating crappies is every panfish angler’s goal. Here’s how to catch crappies like the pros 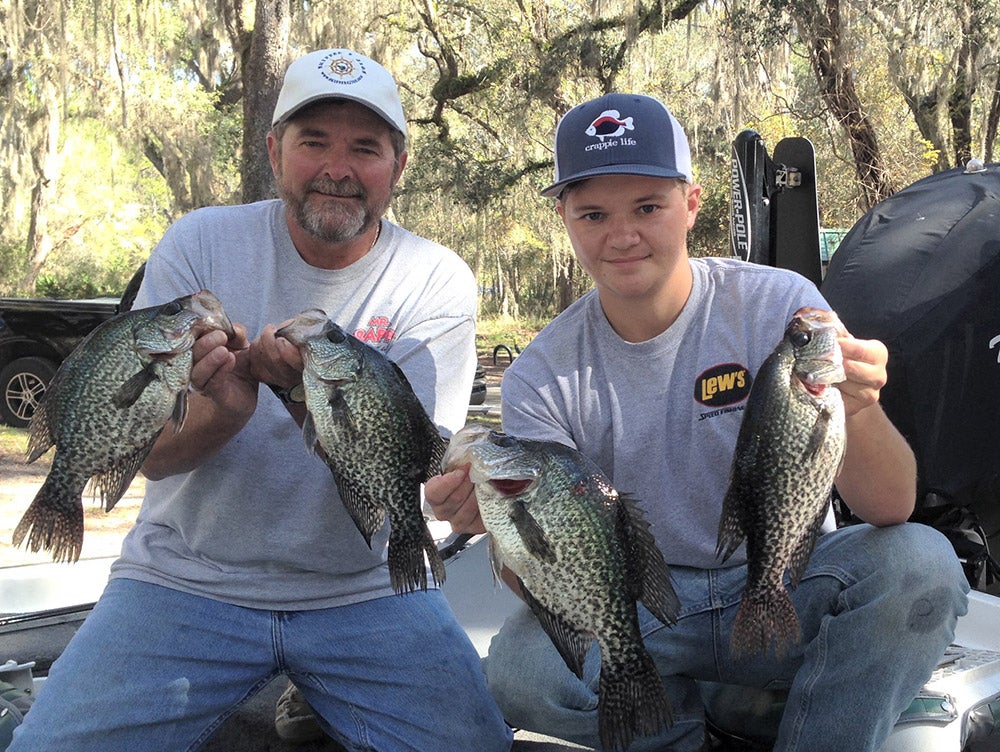 While catching a few slab crappies is surely worthwhile, collecting enough for a fish fry requires volume. Consistently taking that many crappies in a day calls for skill and perseverance. But if you really want to know how to catch crappies, you’ve got to ask the pros. These five techniques from pro anglers are the very best we’ve ever tried for limit catches. (As always, check your local regulations for crappie limits and restrictions on tactics where you fish.)

Crappie Fishing with a Spider Rig

Done correctly, spider rigging can be your quickest path to a limit of specks. Fished improperly, and you’ll be left wondering how anyone could ever avoid a hopelessly tangled mess. Indeed, despite its appearance, spider rigging is a crappie-catching system comprised of nuance and subtly.

TC Lloyd cut his fishing teeth trolling big-crappie water like South Carolina’s Santee-Cooper reservoir. For his spread, Lloyd rigs 10 to 20, 14-foot rods in bow-and-stern-mounted rod holders. He spools each spinning reel with 4-pound-test monofilament and completes his rigging with a ¾-ounce egg sinker, barrel swivel, 2 feet of 4-pound-test leader, and a 1/16-ounce Mylar jig tipped with a fathead or Missouri minnow. Because each rod is rigged identically, fouled lines are rare and even soft bites are easily detectable. His preferred jigs are Slasher Heads made by Jenko Fishing. He uses them with a Jenko Fringe Fry or Mermaid soft-plastic body. Favorite colors are Mississippi Money, Blue Grass, Dirty Milk, and Pepper Dew.

“I vary bait depths from just off bottom to only a couple feet below the surface,” says Lloyd. “Often I find positioning jig-and-minnows just under the surface at dawn to be most effective, but crappies can be anywhere in the water column. That’s why I stagger bait depths to cover all levels until I find the fish.

“If I start catching crappies at 4 feet, I’ll adjust other rods to run jigs-and-minnows at those depths. The best depth can change fast, from 4 feet to 6 feet, or from 8 to 10 feet. Feeding fish dictate the depth I need to present jigs-and-baits, and I find that trolling with the wind catches more fish than heading into the wind.”

How to Jig for Crappie

Brush piles, flooded timber, weed-bed edges, and boat docks are prime cover spots for attracting and holding big numbers of spawning slabs. Many crappie fishermen use live minnows and floats, but that strategy is just too slow for anglers like Sam Heaton.

A long-time crappie guide and tournament angler, Heaton of Stuart, Florida says his favorite method is to swim a crappie jig while moving his boat quickly through prime backwater spawning areas.

“It takes a deft hand and good feel to do correctly,” says Heaton, who began his career on Alabama’s famed Weiss Lake. “I don’t use a float, just an ultralight spinning outfit, light line, and a jig of just the right size and weight.”

Crappies are deliberate feeders that rarely chase lures and baits far, says Heaton. He prefers to suspend a jig or minnow in front of their noses for a long duration. This is where a swimming jig shines.

“The key to properly present a swimming jig is to jiggle the rod tip slightly to work the lure through weeds or brush,” he says. “Because spring spawners hold so tight to cover, this is the time most strikes occur.”

Jigs with wide heads that create a lot of wobble are excellent swimming lures.

“These jigs plane or swim off weeds and cover,” he says. “It’s an outstanding yet subtle action. Sometimes they’re more productive when tipped with a whole live minnow. The minnow makes these jigs more water resistant and buoyant, so it’s easier to swim them through the weeds without getting snagged.”

Roger Gant has been guiding anglers to limit catches of crappies on Pickwick Lake, Tennessee for more than 40 years and while Gant catches fish in all seasons, he is the master of springtime fishing.

For pre- and post-spawn fish, he targets deep creek mouths where crappies stage before and after making their move to headwater and near-shore areas to spawn. He fishes exclusively with brightly colored homemade lead head jigs, using them with spinning rods positioned strategically along one gunnel of his boat. He then makes controlled drifts, working the boat sideways with an electric motor and six or more rods on the boat’s upwind side. Each holds a jig slightly off bottom.

“Water depth is a key factor in catching pre- and post-spawn crappies,” says Gant. “You’ve got to put a jig right in their face to get strikes, especially in blustery, cool conditions.”

Gant always drifts while carefully monitoring his electronics. It’s critical to properly read the bottom contour so that lures and baits are in the fish zone for the longest possible time.

“Unless I’m making a specific drift to check out a particular structure or depth, the bulk of my controlled drifting is done parallel to shore,” he says. “This is to learn bottom contours, so that I can locate any submerged humps or holes, stump flats, or unusual bottom configurations. Often pre- and post-spawn crappies hold tightly to a specific spot, at a certain depth. When you find them, you can really mop up quickly.”

When water temperatures are below 60, very slow presentations are most productive. Jig size must also be decreased.

In cold water, a small minnow fished from a tiny bait hook can be more productive than a jig or jig-and-minnow,” says Gant. “Frequently a crappie will simply mouth a bait following a take and not actually eat the minnow. Small, light floats can help detect light bites from cool-water fish.”

How to Catch Crappies in Weeds

Guide Brian Brosdahl is something of a northern Minnesota fishing savant who specializes in panfish. Crappies, though, are his preferred target.

When crappies have completed spawning, they often are within sight of where anglers caught them during the spawn—from 200 yards to one mile distant.

“Usually post-spawn crappies in northern natural lakes hold in the healthiest, greenest, thickest weeds like cabbage and coontail moss,” he says. “In clear water, they can be as deep as 14 to 16 feet, in stained water they might be down to 8 feet. Sometimes they’ll hold on rock piles or sunken logs, but the best of those structures also have weeds to attract post-spawn crappies.”

On lakes where toothy predators like pike and walleyes prowl, post-spawn crappies live safely inside thick weed beds. To locate schools of post-spawn fish, Brosdahl uses Humminbird side-imaging sonar. He prefers fishing in the mid-morning with a light chop on the water, and uses a lightweight jig tipped with a fathead minnow to pinpoint feeding fish.

Once he finds the crappies, he switches to a jig and slip-bobber rig, so that he can trigger schooled fish into biting.

He employs a light spinning reel spooled with 8-pound-test and a short 4-pound-test leader. His jigs of choice are 1/32-ounce Northland Fire Ball and Thumper Jigs, always tipped with very lively fathead minnows.

“The ticket to catching post-spawners in weeds is to fish a jig just a couple feet off bottom, and sort of slide it through weed stalks,” he says. “You can jiggle jigs through thick weeds pretty well, and sometimes I’ll cover a jig hook tip with a minnow to prevent fouling. Post-spawn crappies can be very aggressive, and they hit hard. Once you find them, you can load a live well.”

With the trolling motor set to 1 mph, the pair positions 8 rods (8 to 18-feet long) in gunnel-mounted holders. Rods are rigged with small, Mr. Crappie, spinning reels spooled with 4-pound-test mono and tied to a pair of Skipper Jig Toad Thumper jigs. Typically, they pull 16 jigs in total.

The Greens set tandem jigs a couple of feet apart with the lightest jig bringing up the rear.

Lure color is vital to crappie success, and they do well with a rainbow of hues such as blue-and-white and blue-and-chartreuse. But fish hit a variety of color lures, including black, white, red and even electric chicken.

The Greens keep their boat moving slowly, never using floats. Live minnows are needed at times, but they prefer bare jigs because it’s simpler to fish without having to deal with live bait. Also, minnows tend to spin while pulling, so a swivel must be positioned in the line above the bait, even if used with just a jig. They use lures to fish a 36-foot wide swath around the back half of their boat. By using various jig weights, the entire top-to-bottom water column is strained as they pull lures along.

“We try not to keep fish under about 10 inches or 1-pound,” says Al Sr. “Fortunately, we have plenty of lakes and rivers jammed with big fish.”