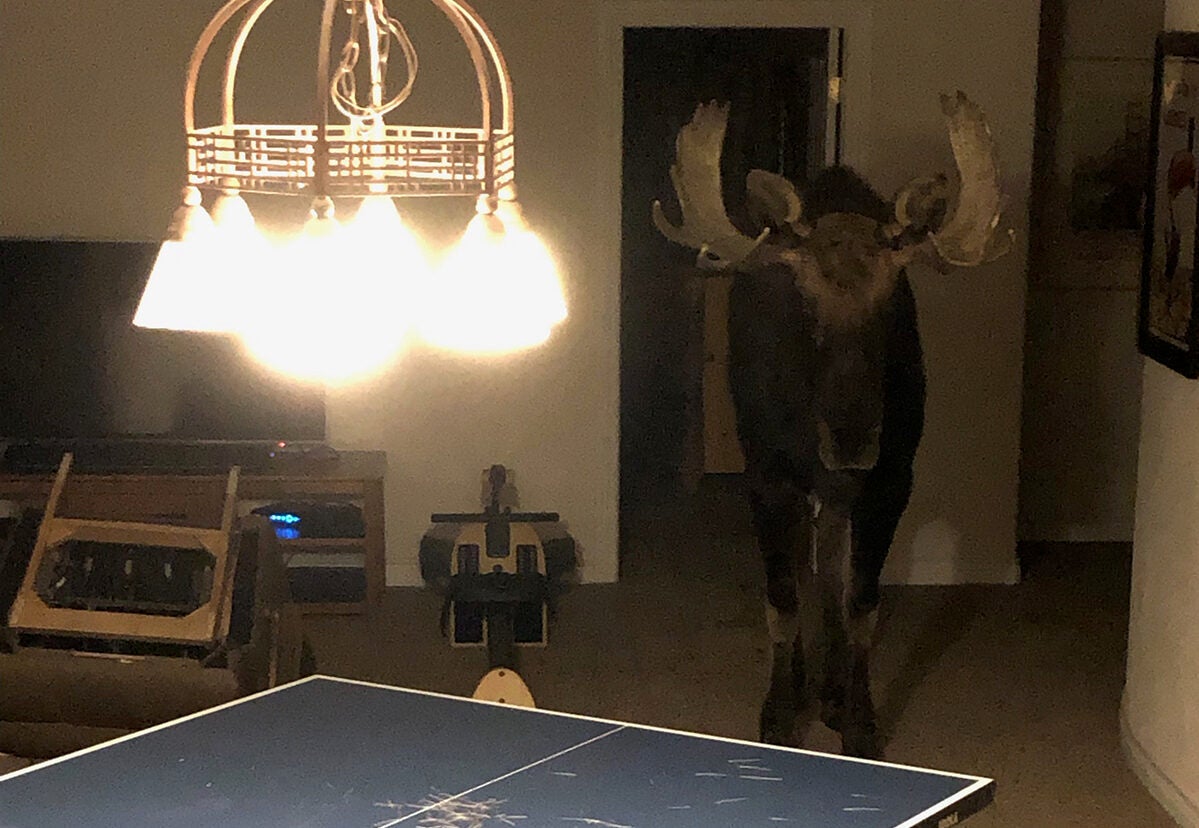 The moose was released from the basement unharmed. Colorado Parks and Wildlife
SHARE

Elk and moose are on the loose in Colorado’s Front Range, and wildlife officers with Colorado Parks and Wildlife have had to rescue animals in suburban areas on two separate occasions so far this week. On Monday, Jan. 10, CPW officers rescued a moose that had become trapped in a basement in Breckenridge. And on Tuesday, officers freed an elk that had become entangled in rope and was temporarily snagged on a tree in Golden.

Officers were notified of the trapped moose around 3:30 p.m. Monday, according to a CPW news release. They arrived at the house, located off Ski Hill Road in Breckenridge, that afternoon, and discovered that the moose had fallen through a snow-covered window well into the home’s basement. They first tried coaxing the moose up the basement stairs to the nearest exit, but the young bull wouldn’t cooperate.

CPW officers then tranquilized the moose, and in an effort to minimize damage to the home, they “cut off its antlers so that it could fit up the home’s stairs.” With help from Breckenridge Police, the Blue River Police, and the local EMS and fire department, the officers were able to carry the animal up the stairs and outside, where it was safely released.

According to CPW, “Moose antlers typically fall off this time of year and the moose will grow new antlers this spring.” CPW District Wildlife Manager Jake Kay added that the moose was released in good health, saying, “other than a small cut on its leg, the moose appeared to be healthy.”

The state’s wildlife officers were at it again by 8:15 a.m. the next day, when they received a report of a bull elk that had become entangled in rope and was hung up in some trees near Golden High School. Officers were on the scene within the hour, according to a CPW news release, and they were assisted by the Golden Police Department’s Animal Management Unit.

After tranquilizing the elk, they were able to remove the rope, and around 10:25 a.m., wildlife officers administered a reversal agent to wake the elk from sedation and it ran away. The animal was likely exhausted, but officers did not observe any serious injuries and they believe that the elk recovered quickly from the ordeal.

Wildlife rescues similar to these two incidents have been increasingly common of late, as cities and subdivisions along the fast-growing Front Range continue to expand into areas that also provide habitat for wildlife. At the same time, Colorado’s resident moose population is expanding, and the state’s Clear Creek elk herd is becoming increasingly urbanized, especially in the Golden area. CPW is currently in the midst of a five-year collaring study that aims to gain a better understanding of the Clear Creek elk herd’s movements so they can manage the herd appropriately.

The state wildlife agency also has plenty of information about living with moose in Colorado and how to best avoid wildlife conflicts. This includes respecting wildlife by not feeding them, and by taking steps to prevent them from coming into homes, buildings, and yards.

As CPW states on its “Living With Wildlife” website: “In most situations, people and wildlife can coexist. The key is to respect the wildness of wildlife.”