Wildlife Officers in Sedalia, Colorado, sedated the deer to remove her from this area. 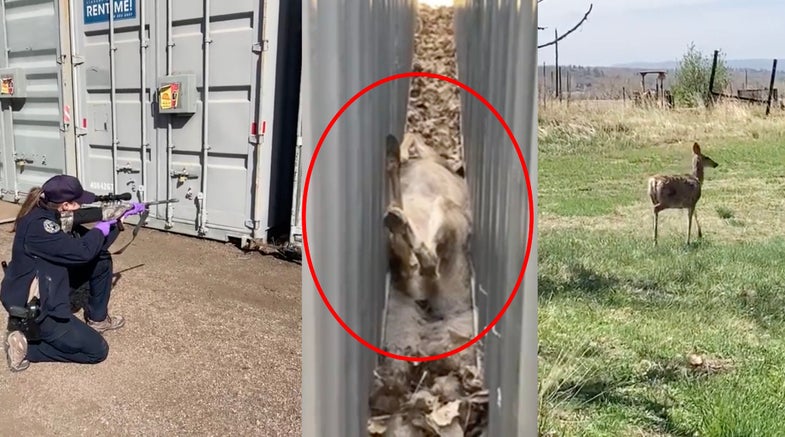 CPW officials tranquilized and rescued a doe that was lodged between two cargo containers. CPW
SHARE

On Monday morning, wildlife officers for Colorado Parks and Wildlife rescued a doe that was trapped between two cargo containers outside Sedalia, a suburb of Denver. The deer had become wedged between the two containers and fallen over backward by the time officers arrived on the scene, according to CPW Northeast division.

In a video released by the agency, officers tranquilize the deer with a sedative and use a jack to pry apart the containers. The officers retrieved the doe, and video shows her wandering around on a nearby parcel of land as she recovers from the sedative.

Officers believe the doe entered on the west, wider side of the slit between the containers and reached a section of the opening where she became wedged and couldn’t turn around. She appears to have then reared up and fallen on her back.

After they came across the deer early Monday morning, reported the incident to the state wildlife agency. The incident could have easily been fatal to the doe if wildlife officers hadn’t arrived on the scene earlier.

“Wildlife officers suggest people think about the placement of these things and other items in yards, and allow for escape routes for wildlife,” stated CPW in a recent tweet.

These issues are common throughout most of the country and have been especially prominent in Colorado. Sedalia, located outside of Denver, is part of Colorado’s front range corridor, which continues to grow at a blistering pace.

“Anything that lowers adult doe survival will likely result in further declines in any mule deer populations that are already declining,” writes CPW in the report.

Loss of habitat due to development is one of the most significant concerns for wildlife officials across the country. A recent report by the National Wildlife Federation indicates that big game populations have lost an average of 6.5 million acres of land over the last two decades.

Mule deer, which have lost an average of 7 million acres of land over the past two decades, have lost more habitat than any other big game species. That, plus severe drought this year is causing some state wildlife departments to cut back on the number of hunting licenses it issues.