I know Remington Bullet knives are supposed to be collectibles, but to me a collectible knife makes as much sense... 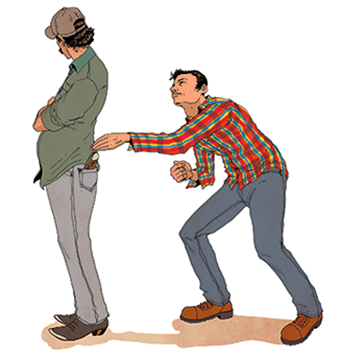 I know Remington Bullet knives are supposed to be collectibles, but to me a collectible knife
makes as much sense as a collectible crescent wrench or chain saw. When my friend gave me this blade in 2000, I saw it as a tool just like my beat-up shotguns and rifles or my F-150 with 307,000 miles on it.

Naturally, I took the knife hunting and it brought me great fortune. It was in my pocket when I shot two 360-class bulls three weeks apart. I used it to slice the breast meat off the Osceolas that filled grand slams for both of my kids when they were 14.

I was as well known for the knife as I was for having one of the best Labs in Kansas. I was always the guy who was asked to clean the ducks and the deer, plus elk, moose, doves, geese, squirrels, pheasants, and prairie chickens. A buddy even asked to use the knife to cut up a tough $40 ribeye in some fancy restaurant.

And then it was gone. A piece-of-trash distant relative stole the best knife ever made from the seat of our farm truck. Of course he denied it, but I knew where my knife was all the time as surely as if it had a tracking chip. But I had no proof.

Figuring all was lost, I went online and bought another, an identical Remington Bullet knife from 2000, and paid about $80 for it. It was okay, but it was kind of like marrying a trophy wife and letting the spouse that had made me who I am wander off. It was an imposter. Even though it looked and felt the same, I felt differently about the new knife.

So I went and stole my original knife back. It was like pulling Excalibur from the stone as I seized and pocketed it, and I know that if God has ever had a really good knife, He will understand.

Last fall, during my first season back with the old knife, I got a heck of a mule deer with my bow, had great hunts for ducks and geese, and filled all four fall turkey permits on toms. I used it to clean a limit of four roosters I shot the last day of the season, too.

And then I got to worrying that I might lose the knife again. So I put it away, and planned on its being as much a part of my will as the Hatfield side-by-side 20-gauge, a few custom fly rods, and whatever cash I’m worth when I die.

Earlier this summer I was on a wild hog hunt in Oklahoma and was using the new Bullet knife when it slipped while I was skinning an old boar. After a long afternoon in the ER and two weeks of healing, I put away the new knife and began carrying the old one around again. No way in hell would it have taken off like that and stabbed me so deep. Knives have a built-in loyalty, you know. The good ones do, anyway.