Brett “Cooter” Ross had a buck tag in his pocket and an antlered deer of unknown size in front of... 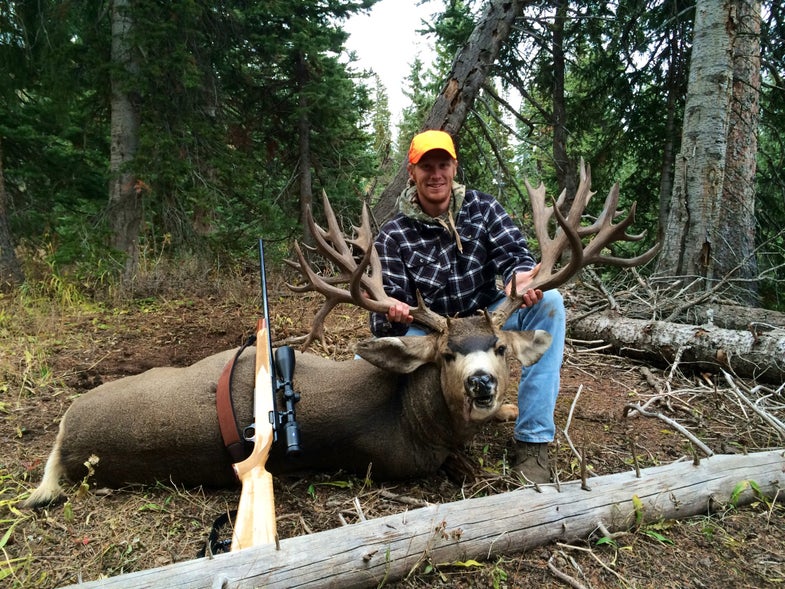 Brett “Cooter” Ross had a buck tag in his pocket and an antlered deer of unknown size in front of him. So he settled his gun on back of his pack, took careful aim, and eased down on the trigger. In that moment, the bullet exploded from the barrel, the buck disappeared in a flash, and Ross’ hunting life changed forever.

It was opening day in Colorado and Ross’ family and friends were all on hand for the annual hunt. After an unsuccessful morning and a brief lunch, Ross, his fiancé Kirsty, and best friend Levi headed out from camp for the afternoon. Ross and his family are self-described meat hunters, and the plan for the day was to simply fill the freezer.

The trio of hunters spread out as they walked along, but after getting about three-quarters of a mile from camp, Ross saw his buddy waving him over his way. Closing the distance as quickly as he could, Ross arrived just in time for Levi to point off in the distance and whisper, “There’s your buck!” As the only hunter with a buck tag, Ross would be taking the shot.

At this point he pulled up his riflescope to see the deer for himself, but all he could find was its body; the buck’s head was hidden behind a tree. He patiently waited until the buck moved enough that he could confirm whether this was a legal buck, and finally, it did.

“Neither one of us knew what he was,” explained Ross. “We just knew it was a legal deer. I thought, since I could just see three points really close together, that he was a little three-point. Just a little guy.”

Boom! The rifle shot echoed across the mountains and Levi and Ross briefly celebrated the fact that once again they would bring venison back to camp. Soon they began their hike down to where they eventually spotted the buck, still thrashing inside the tree line.

“As we were getting closer, Levi could see the buck through an opening in the trees, but I couldn’t,” explained Ross. “And as we’re walking down he keeps grabbing his binoculars and yelling, ‘You shot a toad, you shot a toad!’ He’s been my friend since we were 13 years old, and I’d never seen this level of excitement from him.”

Continuing down the hill, anxious to see what Levi was so excited about, Ross finally stepped into view of his deer. 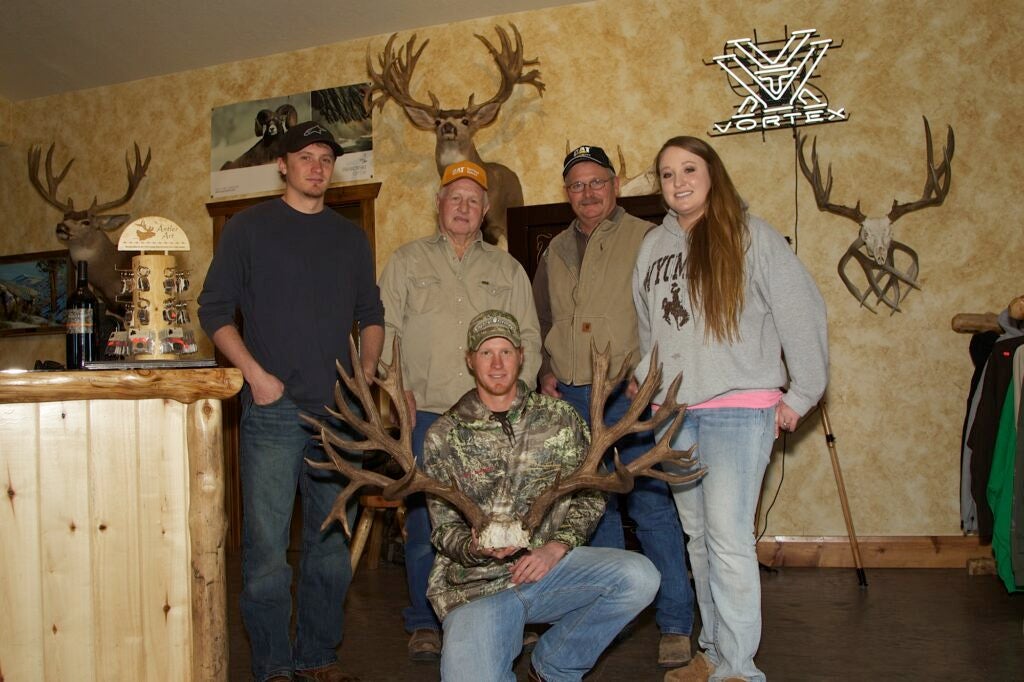 “I immediately dropped to one knee and put my hand on the ground and all I could say was, ‘Oh my God, oh my God.’ I could finally see what I’d shot, and I had thought it had three points, but now it had antlers going everywhere… It was just surreal. I thought that at any moment Ashton Kutcher was going to jump out of the bushes and say ‘You got punked!’”

Lucky for Ross, this was no prank. The buck he had shot was the real deal: a genuine world-class Colorado mule deer of magnificent proportions. And after plenty of cell phone pics and a few “very masculine, best-friend man hugs,” Ross and Levi headed back down the mountain with the buck on their ATV.

Upon their arrival back at camp Ross’ fiancé, friends, and family were all in awe of the giant mule deer. But it’s the reaction that Ross got from his dad that seemed to stick with him the most.

“I had only seen that expression on his face twice before. When I graduated boot camp, and the day I came home from Iraq. I was just so excited to show the man who taught me everything about hunting my bloody hands and what I’d just killed.”

Despite not having past experience with “trophy class deer,” Ross did eventually get his Colorado buck scored by an official Boone & Crockett measurer, and the net score came in at just over 292 inches. An incredible number, to be sure, but Ross’ favorite thing about this deer seems not to be the antlers, but rather the experience of the hunt and those with whom he shared it.

“The deer is majestic in his own sense, having not been seen before and no one finding his sheds. His history of how he made it so far in life without being noticed is amazing on its own. But having my best friend and fiancé on the hunt with me, and having Dad back at camp… It’s for those reasons that I’ll never have another hunt mean so much to me.” 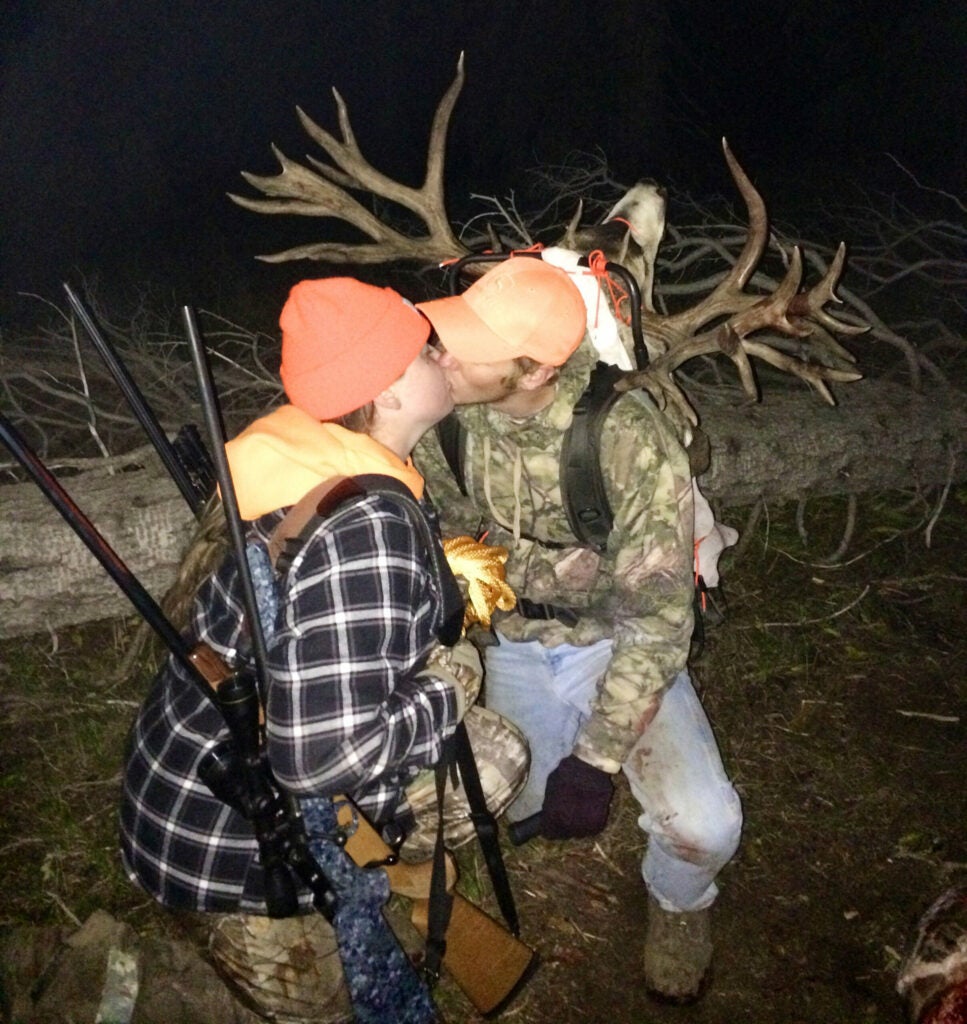 As for the future, despite having a world-class deer to his name, Ross doesn’t plan on changing his way of hunting.

“The first legal thing I see, it’s going to be extremely hard to pass up,” Ross explained, “I’m still going to be a meat hunter.”

The largest non-typical Colorado mule deer on the B&C record books measured 306 7/8 inches, and was taken in Montezuma County in 1972.

Ross’ Colorado muley is eligible for OL’s Deer of the Year program. You can find his entry here. Upload a photo of your own 2014/2015 buck for a chance to win great gear from Gerber and land your deer on the cover of Outdoor Life magazine.

Can’t get enough of big bucks? Check out these photos of rutting whitetails, and learn about the behavior of a trophy buck during the rut: