_Photos by Steve Heiting _ My buddy Mike was not having a good time. Halfway through opening day of muskie... 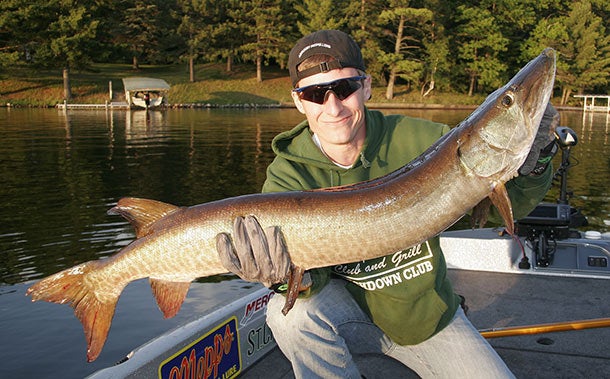 My buddy Mike was not having a good time. Halfway through opening day of muskie season, we had yet to see a fish and were now trailering my boat toward a small lake I’d never even seen before but had been told by a friend was full of muskies. In Mike’s thinking, this was totally against the day’s plan.

Having no prior experience with the new lake, I chose to start fishing off a small point near a shallow bay. I deployed the trolling motor while Mike fired the first cast. He twitched his bait once and immediately shouted, “I got one!”

A minute or so later, I swung the net under Mike’s muskie–­and suddenly all was right in his world. Soon I got in on the fun, and before nightfall we caught and released eight more muskies.

While many muskie anglers don’t get serious until midsummer or even the trophy time of fall, I’m perfectly fine chasing muskies in the early season, whether it’s early April in the South or late May or early June in the upper Midwest. Spring muskies are shallow and their habits are predictable. And in terms of numbers of fish caught, many of my best days have occurred then.

Patterns That Pay Off
To locate spring muskies, find warm water, cover, and baitfish. Since muskies are cold-blooded, the warmer the water, the more they will want to eat. Hence, a water temperature gauge is an essential piece of equipment.

The classic early-season muskie spot is a shallow bay protected from colder main-lake waters by islands or points, but with deep-water access nearby. The shallows absorb heat from the sun, and the best spots are found on the north side of the lake because they receive the most direct sunlight. An incoming stream will add warmer water, and its current will also attract muskies. A spot like this is precisely where muskies spawn once water temperatures hit the magical 52- to 62-degree mark. Spawning muskies are almost impossible to catch, but they tend to feed heavily before and after the spawn. And even if you see paired muskies, you can usually still find aggressive fish because they don’t all spawn at the same time. Baitfish will be in the same places as the muskies because they want warm water, too, for feeding and/or spawning.

Wind can be your ally or your enemy–on sunny, windy days, warmer surface water will be blown to the leeward side of the lake, a location that is always worth checking. Fish are usually turned off when the wind blows colder, main-lake water into the shallows.

Newly emergent weeds, last year’s dead weeds or reeds, and downed trees are prime spring muskie locations because they provide cover and absorb the sun’s heat. A small shoreline point, a sand flat, a wooden dock, a pile of rocks, or even a bottom depression can hold fish. Such shallow areas lose heat quickly during a cold, clear night, so sleep in and let the water warm before you launch your boat.

If you’ve tried shallow areas and still have not had success, consider trailering to a smaller lake, which may be 2 to 10 degrees warmer–a world of difference at any time but especially important in spring.

Baits They’ll Bite
A 5- to 7-inch minnowbait like a Baby Shallow Raider or a Slammer, or a jerkbait like a Suick Musky Thriller, twitched with a lightweight muskie combo is terrific. Retrieve it with short snaps of the rod tip.

Small bucktails like Mepps Musky Killers can be even better, especially on warmer days. If thick cover is an issue, a spinnerbait with a single, upward-riding hook may be the answer. Smaller-size versions of walk-the-dog topwaters can produce when muskies are holding in water measured in inches rather than feet. In Southern waters, Rat-L-Traps mimic small shad and are deadly when retrieved over shallow sand flats. Be sure to upsize the hooks.

Catching a bunch of muskies to kick off the fishing season is not only fun but also more predictable than you might think.