At first glance, Pete Maina is a dead ringer for a burnt-out ’80s rocker. He sports a furry pink top... 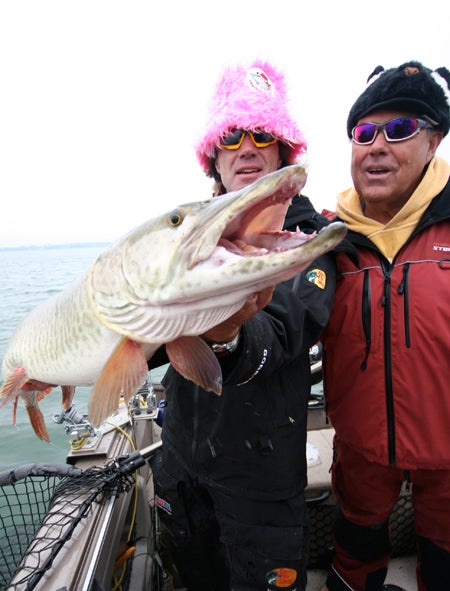 At first glance, Pete Maina is a dead ringer for a burnt-out ’80s rocker. He sports a furry pink top hat, wears his curly hair down to his shoulders, and says stuff like, “I’ve always danced to my own drum.”

It comes as no surprise that muskie fishing’s leading expert is a little unorthodox. After all, we’re talking about a sport that counts follows as victories and a three-fish day as akin to winning the lottery. You see, chasing muskies is not a sport for normal people. “None of it really makes sense, if you think about it,” Maina says. “We’re all weirdos.”

Maina grew up in Hayward, Wisconsin, arguably the muskie capital of the world, and caught his first ‘ski at age 11. Over the next four decades, he landed, by his rough count, at least 2,999 more, and guided clients to countless others. Maina has spent the last 20 years of his life hosting television fishing shows–his The Next Bite has grown into a booming success.

It’s the pressure to catch big fish on camera that has helped Maina develop specific tactics for 50- and 60-inch muskies. Follow his tips to catch the biggest muskies in the lake. Of course, that’s assuming you’re secure enough in you manhood to take fishing advice from a guy in a pink hat.

1. Do Your Research
Some waters are simply not capable of producing 50-inch muskies. Instead of wasting your time with fish inside of 3 feet, do research on local fisheries to see which are turning out trophy fish.

Maina also suggests looking through stocking records. He’s found that the best time to catch huge fish is 10 years after a lake is initially stocked. It typically takes muskies 15 years to grow 50 inches long, but in newly stocked lakes, due to abundant forage, it can take them as little as nine years, Maina says.

2. Low Fishing Pressure: Find Classic Cover
For the most part, muskies frequent the same habitat walleyes and bass live in (they don’t like to travel far for their food). But in unpressured waters, big muskies will consistently be found in spots with a specific home decor. The perfect trophy muskie cover is a sharp, weedy break with some big boulders and timber mixed in, with easy access to the main lake.

3. High Fishing Pressure: Find Secondary Cover
On high-pressure lakes, Maina recommends that you figure out where people are fishing and then work around them. If boats are hitting a big weed bed, head for deeper water near that bed and troll as many lines as possible. Stagger your baits to find fish suspended at depths from 1 to 30 feet.

“Bass anglers have no problem fishing docks, while most muskie guys wouldn’t be caught dead near them. But docks attract forage, and that attracts big muskies,” Maina says.

If you feel obligated to fish traditional cover on pressured water, do it at night, when weekend warriors are in bed.
**
4. Don’t Waste the Window**
Muskie feeding windows are triggered by a drop in barometric pressure, which is caused by incoming storm fronts. They can also be triggered by sunsets and sunrises or moon sets and rises. Maina’s perfect storm is when a front rolls in during a solar or lunar set or rise.

When these windows open, be at your best spot and fish hard. When you land a big muskie, don’t waste a lot of time kissing the fish and taking pictures. Get back to fishing as quickly as possible. There’s a good chance you’ll catch back-to-back muskies.

“There will be time to celebrate when the bite is over–and believe me, it will be over pretty soon,” Maina says.

5. Go Retro
It doesn’t take long for muskies to get burned out on a bait, and once anglers stop catching fish on that bait, they’ll stop using it. But that doesn’t mean the lure no longer has an enticing action–it’s just that muskies have already seen it. There are a lot of old muskie baits, such as Suicks, that have gone the way of Maina’s hairstyle, but now might be the time to bring them back.

“The whole idea is to show them something they haven’t seen before. This is especially true for big muskies, because they’ve been around the block a couple of times,” Maina says.