Legacy of a Winner

Roland Martin's storied tournament career is over, but he left some important fishing lessons behind. 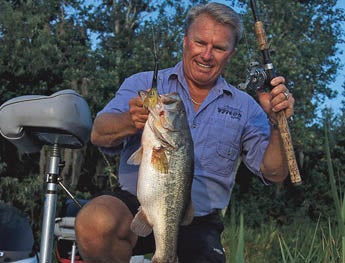 Every sport has its superstars. They grow in stature during the course of their careers until they stand head and shoulders above the pack. None stands taller than Roland Martin, who announced his retirement from professional bass fishing in November.

Even at 65, Martin is an extraordinary competitor. Yet he chose to retire from the sport after 35 years because he became dissatisfied with his performance in recent tournaments.

“I’m a really proud person and I came to the conclusion that I can’t compete at the same level I used to,” says Martin. “My interests are changing now. I had some excellent hunting trips last fall and got a nice bull moose in Alaska and a big elk in Utah. I had some great fishing trips, too-just for the fun of it. I really enjoyed myself and I didn’t think about fishing in bass tournaments. I just felt like it was time to go.”

Born to Catch Bass
I first met Roland in 1966, a year before Ray Scott held his first bass tournament and a few years before Roland began competing professionally. I had heard about the phenomenal young angler from a friend who had hired Roland as a guide on Lake Santee Cooper in South Carolina.

My wife, Gayle, and I joined Roland for a three-day fishing trip. He lived up to his billing: Though only in his mid-20s, he knew more about bass fishing than most seasoned veterans. The highlight of the trip was when Gayle hooked the biggest bass of her life. The lunker burrowed down into weeds and wouldn’t budge. The weeds had grown up and covered the surface in places and were so thick we couldn’t get the boat through them. Roland pondered the situation for a moment. “Don’t worry,” he said, “we’ll get that bass.” Then he took off his shoes, emptied his pockets and waded out into chest-deep water to retrieve the l0-pound-plus largemouth from the weeds.

At the end of the trip, as we were bidding Roland goodbye, he told us that his parents had been killed two weeks before in a car crash in Belgium. Such was his ability to concentrate on what he needed to do to get a job done.

I thought to myself, this kid will go far in whatever direction he decides to take with his life.

That he did. Roland went on to garner almost every accolade possible in professional bass fishing. Although he never won a Bassmaster Classic (he finished fourth in his first Classic in 1971 and his last in 2003), he was an odds-on favorite to win in virtually every one for which he qualified. He’s a member of the Professional Bass Fishing Hall of Fame as well as the Freshwater Fishing Hall of Fame. Last year, bass tournament fans selected Roland as the second greatest bass professional of all time, behind Rick Clunn.

Secrets to Fishing Success
Through the years, Roland racked up his impressive tournament record while traveling around the country to and from events, filming a television series and keeping sponsors happy by appearing in hundreds of fishing seminars.

I believe that his ability to maintain a winning edge despite all the distractions in his life can be summed up under three headings.

**Motivation **”I love fishing, whether I’m in a tournament or just fishing for the heck of it,” says Roland. Don’t we know it. Every time he utters an excited “Aww, SON, it’s a MONSTER!” when he hooks a bass during his television program, his enthusiasm is evident.

**Determination **”Everything I’ve ever tried, whether it’s hunting or fishing, I’ve willed myself to do the best I could and not quit until time runs out. The next cast is the one that counts.”

As Gayle and I discovered many years ago, Roland’s determination to reach a goal sets him apart from most.

Observation “I pay attention to everything when I’m on the water: temperature, wave action, light, water clarity, cover, structure. I’ve trained myself to really focus on the surroundings.” A student of ffish and fishing, Roland translated what he saw and learned into a system we call “pattern fishing” today. What it means is that if you can catch bass on a certain lure at a place where a variety of environmental conditions are prevalent, you should be able to catch bass anywhere else on the river or lake that fits the same pattern.

Motivation, determination and the ability to draw the right conclusions from what you observe-many anglers share those traits, but something in Roland’s persona magnified them and elevated his skills to a higher level.

So now Roland is riding off into the sunset, though in a bass boat instead of astride a horse. But what a run he had.

Don’t expect Roland to sit on a porch somewhere, kicking back in a rocking chair. He will still find time for his favorite hobbies-turkey hunting, tarpon fishing and designing fishing tackle among them. Doubtless Roland will remain a key figure in the fishing industry, as well as serve as an example to anglers who want to excel, whether they’re fishing for fun or fame.