Fishing buddies from Alabama caught their winning bass in the final minutes of the last day of the competition, earning a cash prize, plus a truck and boat apiece 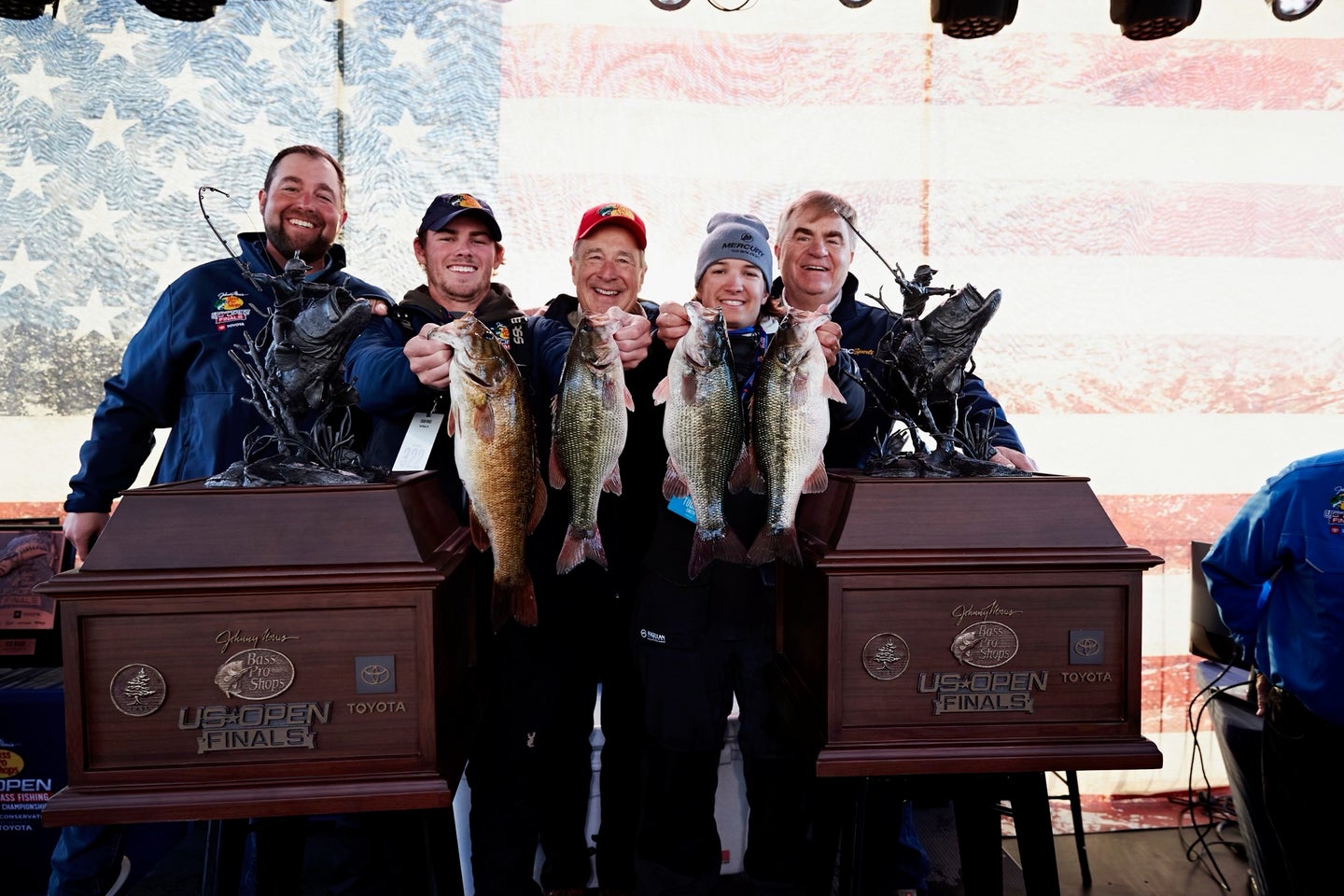 Logan Parks (second from left) and Tucker Smith (second from right) hold up four of the five fish that gave them the weight they needed to win the tournament. Bass Pro Shops
SHARE

The three-day championship tournament was hosted at Big Cedar Lodge, and it represented the culmination of a nine-month-long series of qualifying tournaments that were hosted around the country. The event was billed as a kickstart to Bass Pro Shops’ 50th Anniversary, but it was really a celebration of the amateurs who make the sport what it is today.

Bringing a Million Bucks Back to Bama

The top 350 teams—700 anglers in total—representing 34 states and six countries competed in the U.S. Open Amateur Team Championships that kicked off Nov. 19. The field was whittled down to 200 by Saturday’s competition, and Sunday’s final event featured the top 50 amateur teams competing for the much-anticipated million-dollar payday.

Smith and Parks, undergrads at Auburn University, made it to the tournament after finishing among the top 40 teams at the Last-Chance Qualifier tournament that took place at Bull Shoals Lake just two days before the Championships. After fishing consistently and putting up solid weights of 13-plus pounds on Friday and Saturday, the two anglers from Alabama were the only collegiate fishermen—out of the original eight who qualified—that made it to Sunday’s Big Dance.

As Parks explains, colder weather during the first two days of the tournament had slowed Sunday’s morning bite. He says their main strategy was to look for active fish using a combination of forward-facing sonar and Damiki rigs. But what really gave them a leg up was their ability to capitalize on more natural clues.

“We only had one fish before about 10 o’clock on the championship day,” Parks says. “We finally found a new place where the birds were diving, and we caught 15 pounds in about 30 minutes. So that was pretty awesome.”

After that 30-minute hot streak, the two knew they had a real shot at a paycheck, but they didn’t connect with many fish for several hours. Parks says it took them until the very end of the day, when they returned to the spot where they had found birds diving.

“We pulled up to that place late in the day,” Parks explains, “and in the last 20 minutes we caught two 3¼-pound spots that gave us the winning weight. Tucker caught one, and literally while he was culling, I hooked up with the other one. So it was pretty special to be able to catch those fish in the last minute like that.”

Their winning bag on Sunday was a five-fish limit totaling 16.41 pounds. This gave them a narrow but crucial lead over the second- and third-place teams, which bagged 16.18 and 16.01 pounds, respectively.

Outdoor Life caught up with the two first-place finishers the following day. They were on their way home to Alabama—each with $500,000 in their pocket, along with keys to brand-new Toyota Tundras and 21-foot Nitro bass boats.

The collegiate bass fishermen had already had a banner year, as the Tigers won all five Southern Collegiate Bass Trail tournaments this year, and Auburn was named School of the Year in Major League Fishing’s Southeastern Division. Smith, who is currently a sophomore, says they’ve been fishing partners for a while. The two competed together in the college circuit last year, and they joined forces again this year. Both anglers started fishing at a young age, and both hope to pursue careers in professional bass fishing.

“It’s definitely been a dream of mine to fish professionally,” says Parks, who plans to graduate from Auburn this December. “And I know that Tucker feels the same way. So, this money—and the truck and the boat too—is really going to help propel our careers forward as we look to fish the Bassmaster Open in hopes of qualifying for the Bassmaster Elite Series.”

As for their mentors and role-models in the fishing world, the duo says they’re grateful for their uncles, dads, and granddads—all of whom introduced them to the sport. And Smith mentions that he was particularly close with Aaron Martens, one of the sport’s all-time greats who passed away this month.

“Aaron was one of my best friends, and I talked to him every single day,” Smith says. He adds that he and his uncle were on the water with Martens the day his mentor suffered the seizure that eventually led to his brain cancer diagnosis. “He was just such an amazing guy and treated everyone else like equals—even though he’s one of the greatest to ever do it. He taught me more than anybody ever has…not just about fishing but about being a good person.”

Smith even credits Martens—and perhaps a bit of divine intervention—with the strong finish they had in the final minutes of the tournament.

“It was really sad with everything that happened, but I know he’s in a better place. And I know that he was looking down smiling, because his last tournament victory was on Table Rock Lake. So that was really special for me to win it there.”

Smith was also amazed—and just as humbled—by their pivotal success in the bottom of the ninth.

“I think God and Aaron Martens put those birds right there for us,” he says. “It just seems wild the way it all went down.”

Getting (and Giving) Back to Where It All Began

In addition to offering the largest payout of any single freshwater fishing tournament in history, the first-of-its-kind event was also a tremendous opportunity to raise money for conservation. As Johnny Morris explained to Outdoor Life on the second day of the tournament, 100 percent of the anglers’ entry fees were donated to conservation. That resulted in a $1.58 million check to the National Fish Habitat Partnership, which funds habitat improvement and restoration projects in reservoirs and rivers all around the country.

“I’m proud of all the anglers who supported this, and hopefully it just creates awareness,” says Morris, the 73-year-old founder and CEO of Bass Pro Shops. “I feel like, in many ways, that sportsmen and women are really the unsung heroes of conservation. And hopefully this tournament will shed some light on the importance of habitat and conservation.”

And for Morris, both the timing of the tournament and its location at Table Rock Lake made it a deeply personal and full circle return to his own roots in the bass fishing world.

“I get emotional about it actually, because…Table Rock Lake and its tributaries are really the birthplace of our company,” Morris explains. It was also the birthplace of his own career in the bass fishing industry, as he participated in the first ever national BASS Tournament on the same lake—almost 51 years to the date from when this year’s amateur tournament took place.

“I’ll never forget it. Carl Lowrance was there. And Tom Mann, who invented Mann’s jelly worms and was a legend at the time. There was Bill Norman of Norman Lures, and Forrest Wood with Ranger…along with a lot of other innovators. Bill Dance won that tournament, and Roland Martin came in second,” recalls Morris, who was 21 at the time. “I think I came in 21st, but that’s where it all began—me fishing that tournament and meeting all these fishermen from all over the country.”

He tells the story of how, after the tournament, he convinced his dad to let him sell lures in the back of the Brown Derby liquor store he owned. And the rest, as they say, is history.