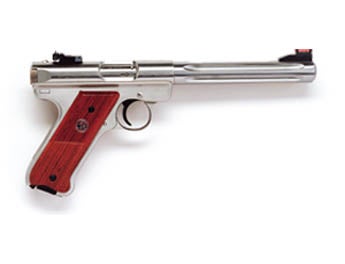 “Great oaks from tiny acorns grow” they say, and from an inexpensive little pistol that sprouted from a little red barn over a half century ago grew one of the world’s greatest producers of firearms. Sprung from the mind of the late Bill Ruger, the .22 Standard Pistol, an autoloader with a suspiciously Lugeresque profile, seemed too good a bargain to be true. But true it was, and after some 2 million copies this acorn of a gun has become one of the biggest-selling sporting firearms of all time. Though the gun was of conventional blowback operation, what was not conventional about its design was the enclosed bolt within a rigid receiver and barrel unit. Even less conventional was the way the grip frame and trigger assembly detached, without tools, from the receiver for quick and easy cleaning and service.

With a 1950s price tag of only $37.50, the Ruger cost less than half the price of top .22 target pistols of that era, and any doubts about its reliability and accuracy were erased when Jim Clark, a Louisiana pistolsmith, used one to win the 1958 National Pistol Championships. Its rugged simplicity has invited numberless modifications by professional and amateur gunsmiths alike. No one, however, has been busier modifying and improving the pistol than the Ruger people themselves. Progressing through the Mark I and Mark II series, there have been more variations than I can keep up with, and this latest, the Mark III Hunter, not only has a host of honest-to-goodness improvements, but to my eye is the most fetching yet. Aside from its polished stainless steel construction and checkered cocobolo wood grips, the most striking feature of the Hunter is its fluted barrel. Usually I don’t get excited about fluted barrels, especially when done only for fool-the-buyer cosmetic purposes, but the deeper and wider than usual flutes in the Hunter are smoothly cut and have the effect of shifting the balance more to the center of the hand. The tapered bolt “ears” are easier to grasp than the old ones and the magazine release button is a welcome improvement over the old bottom catch.

The Hi-Viz front sight fits neatly in the adjustable V-notch rear sight, but more appealing is the Weaver-style scope base that comes with the Hunter. To my thinking, this pistol begs to be scoped for plinking, small-game hunting and target shooting. When the scope base is attached it lies flat and does not get in the way of the open sights. Thus, by using quick-detachable rings, you can go either open or optical in a few seconds.

[pagebreak] For accuracy testing, I mounted the Hunter in a Ransom machine rest. A 10-shot group at 25 yards with a favorite old lot of CCI-Green Tag ammo produced a ragged hole about the size of a quarter. Curious, I fired two more 10-shot series into the same target and saw no enlargement of the group except for a couple of shots that leaked out about 1/8 inch. I’ve seen highly tuned bull’s-eye-type pistols do better than this, but not very much.

My main-and only-gripe with the Hunter is the trigger pull. Though consistent from pull to pull, at nearly 3½ pounds it’s too heavy for the type of shooting this gun is made for. Worked down to 2½ pounds, the way they do it at Clark Custom Guns, the Mark III would be about all anyone could ask for in a rimfire pistol.