The greatest collection of buffalo gunners isn't a sepia-toned memory. It's a gathering every june on the greening prairie of eastern Montana. 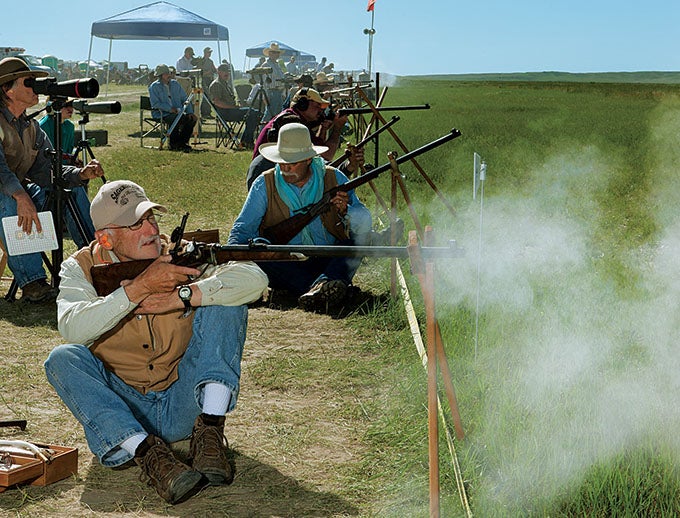 A rifle recoils in a cloud of smoke on a shot taken from a sitting position.
SHARE 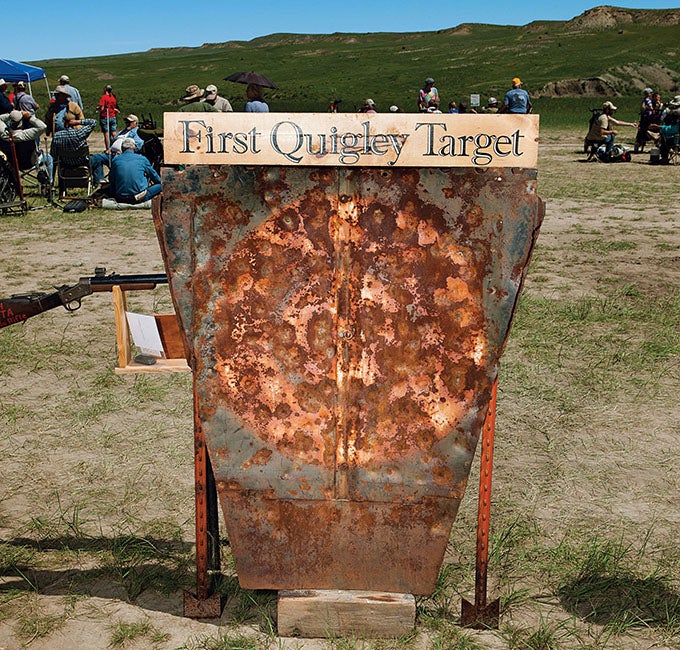 The buffalo bull is out at exactly 805 yards, and though it isn’t moving, the sagebrush around it sure is. The shooter, a bearded man wearing weathered buckskins, with a skinning knife in his tooled leather belt, steadies his long-barreled .45/90 rifle on a forked stick and waits for the sage to settle. When it does, he slows and then stops his breathing, squints into the Vernier peep sight, and deliberately squeezes off a shot. A tidy puff of white smoke drifts across the green landscape like a scale model cumulus cloud. A full three seconds after the rifle’s report—that’s enough time to take a drink of water or re-read this sentence—a resonant clang echoes back, confirming a hit on the buffalo, which is actually a life-size silhouette of a bull bison cut from ½-inch-thick steel.

Welcome to Station No. 1 in the Matthew Quigley Buffalo Rifle Match not far out of Forsyth, on the eastern side of Montana Territory. This is the 22nd edition of the annual shoot that celebrates two essential things: the far-shooting “needle guns” of open-range buffalo hunters, and the culture of the West before barbed wire, interstate highways, plat maps, and townsite speculators carved the gentle prairie into hard-sided squares.

The shoot has been taking place every Father’s Day but one (the 2011 annual event was canceled due to weather) on Al Lee’s 640,000-acre ranch, which sprawls across the eastern Montana plains. It’s easy to imagine real buffalo here instead of the silhouette targets that range from 350 to 805 yards beyond the firing line.

And it’s also easy to imagine that it’s circa 1880. Among the T-shirt and Nike sneaker wearers, latter–day mule skinners, buffalo hunters, ox-cart drovers, bandana-wearing cowpunchers, and commissary clerks stroll the sagebrush in period costumes that appear out place only when their owners step into air-conditioned RVs to get out of the brilliant June sun. 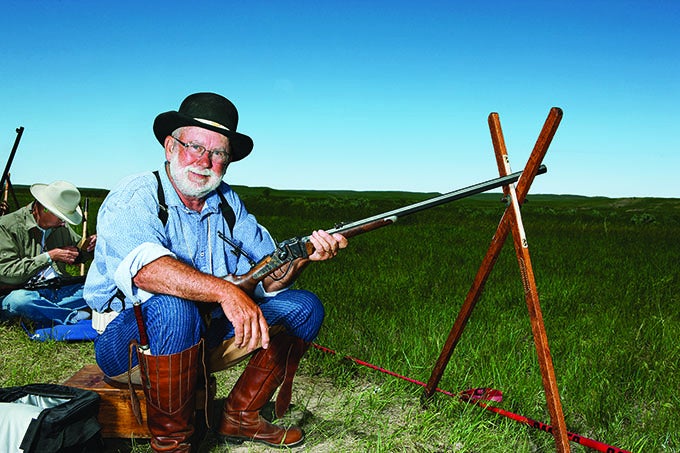 HOMAGE TO THE BUFFALO GUN
It’s the guns that are the center of attention here, though. There’s really only one requirement to shoot at the Quigley, as it’s simply and affectionately known: Contestants are limited to rifles chambered in .375 or larger, lever-action or single-shot, with any metallic sight. Guns must shoot cast bullets, and there’s no changing rifles once you begin. You must stick with the same action and barrel that you start with.

Theoretically, you could shoot any number of modern rifles, but the majority of shooters gravitate toward either vintage classics or their replicas: Shilohs, Sharps, Pedersolis, Browning Hi-Walls.

Contestants shoot in squads of six, along a firing line that stretches as long as a city block. They shoot eight shots each, from six stations, at a variety of steel targets. The farthest is the 805-yard life-size steel buffalo silhouette. The others are smaller and closer—if you consider 350 yards with iron sights close. If you hear the gong of a hit, it’s a scored target. No gong, no points. The best possible score is 48. Last year, Edward Tilton of Columbia Falls, Mont., took first with 43 hits. Winners receive handsome bronze plaques and buffalo rifles donated by match sponsors.

Divisions include Father-Son, Father-Daughter, Three Generation, Ladies, Youth, and White Buffalo, for shooters over age 72. Last year, 568 shooters from 30 states and five countries competed. Ninety-one shooters were here for the first time, doping the wind and trying to make what can seem like impossible shots.

So what’s the appeal?

Partly, it’s the place. On this very same Montana range, only 130 years ago, the buffalo were real, not steel, and moved in herds that numbered in the thousands. The shooters were the buffalo hunters whose role in the romance and history of this place occurred over a blindingly short span of time.

When Lewis and Clark crisscrossed the West, from 1804 to 1806, the number of buffalo between the Mississippi and the Rockies was approximated at 60 million. Nathaniel Langford, the first superintendent of Yellowstone National Park, observed a single herd of buffalo in 1870 that he estimated covered an area spanning five by eight miles. To hunters, pioneers, and railroad workers, bison were there for the taking. And they took them, by the thousands. The hunters killed them not only to feed railroad workers, but also for their valuable hides, popular back East and on the Continent for making coats and lap robes. Buffalo leather was more durable than cowhide, especially as drive belts to power the growing industrial revolution. By the late 1880s, only a few hundred bison remained.

Buffalo were easy prey, having no inborn fear of man or his firearms. This was more shooting than hunting. But they were very difficult to kill, often weighing more than a ton. It took a lethal combination of bullet weight and placement to bring them down. And the rifle of choice in that era was the far-shooting Sharps, chambered in .45/70 caliber and larger. It was not unusual for a hunter to bring down and dress out 60 animals in a day. “Buffalo Bill” Cody’s rifle, named “Lucretia,” was a breech-loading .50-caliber Springfield needle gun. He would one day boast of taking 4,280 buffalo with this rifle over 17 months to provide meat for the workers building the Union Pacific railroad. Once the buffalo had vanished from the plains, the formidable Sharps .45/70 and similar firearms became obsolete, as they were unwieldy for deer, antelope, and elk. For many decades, they stood in closets and hung over mantles, classic reminders of a time long past. 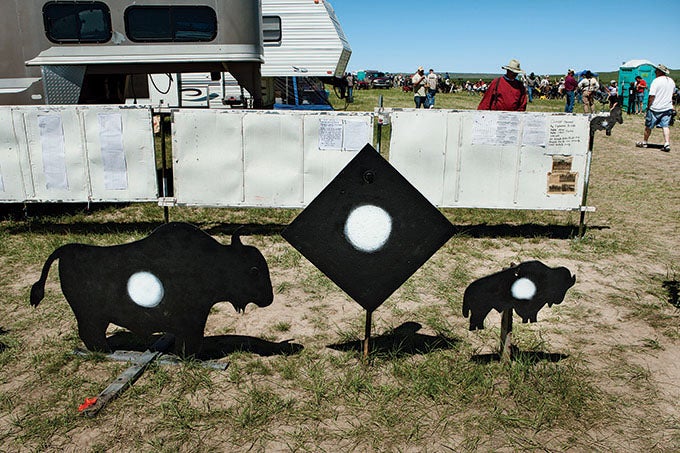 INSPIRED BY A MOVIE
Then Hollywood rediscovered the venerable old Sharps. In the 1990 movie Quigley Down Under, Matthew Quigley (Tom Selleck) carries and uses his .45/110 Shiloh Sharps 1874 rifle—with its double-set triggers, Vernier peep sight, and Globe front sight—in heroic fashion. Far from Hollywood, that film was seen by rancher Al Lee and his buddy Earnie Cornett. Both were members of the Forsyth Rifle and Pistol Club, and the movie gave them an idea. Using the rusted hood from an old junkyard Plymouth as a target, and shooting the large-caliber blackpowder cartridges, they held the first Matthew Quigley Buffalo Rifle Match on the Lee Ranch in 1991. The first contest had 29 entries; now, it has become the largest competition of its kind, with shooters coming from all over the planet.

The expansive sagebrush flats on the ranch are transformed into “Quigleyville, USA” for the weekend. Hundreds of RVs, campers, and tents form a wide encampment, filling all the available spaces, and vendors sell everything from replica gun parts to bone-handled knives. Some folks arrive several days early for shooting practice.

“The first five years, the numbers were rather low. But then it hit the internet, and it really took off,” says Lee, who has been on the 100-square-mile ranch since his father bought it when Lee was 16. Now 83, Lee calls himself “one of the last of the open-range riders.” He has been a member of the Forsyth Rifle and Pistol Club for 45 years. His friend Buz Coker runs the Quigley shoot. 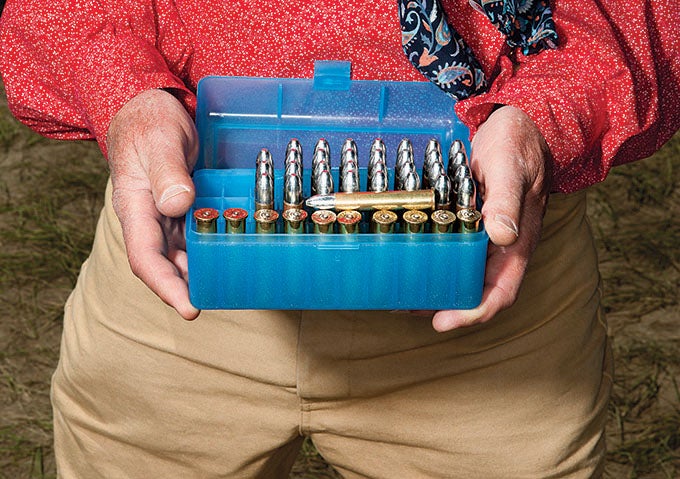 This box of .45/90 handloads is ready to take on the metailic targets scattered across the Montana sagebrush

ON THE LINE
Competitors employ various styles of shooting sticks, just as the old buffalo hunters did on the open plains. The rifles often weigh far in excess of a dozen pounds, so contestants use everything from simple cross sticks to elk antlers and brass monopods—except at Station No. 6. There, shooters test their accuracy in the unsupported off-hand position.

There is a certain music to the day, as volleys of cast bullets repeatedly strike the distant targets, and the resounding gongs or clangs echo back across the draw.
And there’s ample camaraderie, too. When shooters aren’t pulling triggers, they’re talking about guns, accessories, loads, and modifications—and their place on waiting lists to receive their next $3,000 buffalo rifle.

Mark Scott of Billings, Mont., has been shooting at Quigley’s steel targets since 2003. He attended his first match with his dad. While his performance matters, he also enjoys “the BS time with the other shooters…sharing the sport,” he says. Scott’s first rifle was a Pedersoli, in .45/100. Later, in 2006, he ordered a new rifle from the Shiloh Rifle Manufacturing Co. in Big Timber, Mont., in the same caliber, with Montana Vintage Arms sights. It arrived in 2008, which is about the standard wait time for a Shiloh.

“Good things take longer,” says Scott, who once killed a moose with his Pedersoli. “The mechanics of these rifles are so clean, so simple. The trick is to work up a halfway good load.” Reloading ammo is just another facet of the long-distance challenge. 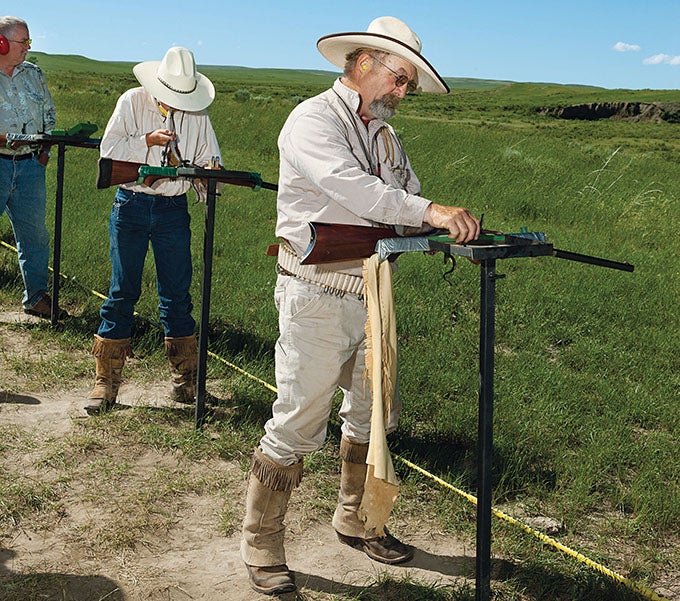 DOPING THE WEATHER
Most contestants spend weeks and months preparing for the Quigley, but the one factor that influences every shooter’s performance is the weather.

Shooters have to expect strong crosswinds. Those who draw the earlier shooting times, before the winds pick up, fare better. The wind not only affects the flight of the heavy bullets, but also raises clouds of dust that not only obscure the distant targets but also require shooters to constantly clean their rifles.

Even in relatively calm conditions, shooters up and down the line—and even in their RVs and tents—are forever swabbing out the heavy octagonal barrels to keep them free of grit and dust.
Another Billings shooter, Ron Vanden Brink, started competing at the Quigley 15 years ago. His first buffalo rifle was an 1885 Browning Hi-Wall in .45/65. He later had it re-chambered to .45/82 and shot it for the next dozen years. But following the lead of so many others, he eventually ordered an 1874 Sharps in .45/100, from the C. Sharps Arms Co., also located in Big Timber.

“Your success at the Quigley depends on two things—skill and luck,” says Vanden Brink. “One year the temperature hit 115, and in others, we’ve had to shoot while wearing hoods and gloves because of the cold.”

For the majority of the shooters, the match is an annual pilgrimage, attracting vintage-gun enthusiasts from all over the globe. Thomas Buck, from Germany, has participated in nine Quigleys. “I love to come here,” he says. “We have no such places, where we can shoot from so far, in Germany.”

In the evenings, the encampment brings to mind the scene of a westering wagon train circling up for the night. Instead of covered Conestoga wagons, the campsite is defined by RVs and nylon tents. And because of an open-fire restriction in the powder-dry sage country, the cheerful campfire has been replaced by propane grills. These contained fires serve the same magnetic purpose as a community campfire: Groups huddle around them, and laughter fills the purple June night.