High velocity gives Smith & Wesson's 460XVR revolver the flat trajectory of a single-shot pistol and the accuracy to use it. 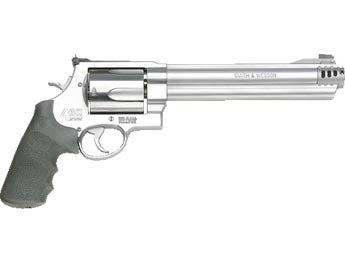 Big-bore revolvers are potent hunting tools. But beyond 125 yards, their lower velocity and rainbow-like trajectory limit their usefulness unless the precise range can be determined and the correct holdover applied. Smith & Wesson’s new 460XVR changes that.

Introduced in 2005, the 460XVR (Extreme Velocity Revolver) is built on the same massive five-shot, double action X-frame that houses the S&W 500 Magnum. With an 83/8-inch barrel (1 inch of which is interchangeable compensator) the stainless-steel gun weighs a hefty 73 ounces. Rubber grips are standard. Sights consist of S&W’s adjustable rear sight with a black blade and interchangeable front sights, either a gold bead on a black Patridge blade or a Hi-Viz green fiber-optic sight. Like the S&W 500, the 460XVR is drilled and tapped for optical sights.

The .460 S&W Magnum cartridge is a straight-walled rimmed case using a .45-caliber bullet. With the 200-grain Cor-Bon Barnes X or Hornady SST loads, the velocity from the 83/8-inch barrel is 2,300 feet per second. No double-action revolver, regardless of caliber, has ever achieved that speed.

That expands the useful range of the 460 into the single-shot pistol class. In fact, according to ballistic figures supplied by S&W, when the 200-grain load is sighted-in at 200 yards, the trajectory will not put the bullet more than 5 inches above or below the point of aim from the muzzle to 250 yards. That’s a “sure-kill zone” given a broadside shot on any deer-sized game animal.

Time spent on the range with the 460XVR indicates this gun can be a tack-driver, too. Shooting from a sand-bagged rest at 100 yards with a scope-sighted gun, I was consistently able to produce two-shot groups (pairs) measuring 1.5 inches. That’s quality single-shot-pistol accuracy. And despite the power this gun produces, its perceived recoil was not much more than that of a .44 Magnum. Muzzle blast was significant, however, so be sure to use both earplugs and muffs.

While the 200-grain loads are designed for speed, the 460 can also be loaded for power. Cor-Bon (which developed both the S&W 500 and the 460XVR) provides a 275-grain Barnes X load at 1,750 fps, a 325-grain Bonded Core Soft Point (BCSP) at 1,650 fps, and a 395 hard-cast FP load at 1,525 fps. The 200-grain loads are best suited for deer-size game, but the 275-grain slug would be an excellent choice for boar or black bear. The latter two loads should handle anything one would sanely hunt with a handgun. For reduced recoil during practice sessions, the 460 will also shoot the tamer .454 Casull and the .45 Long Colt in the same manner that a .357 Magnum will shoot .38 Special loads.