The best shotguns for waterfowl. 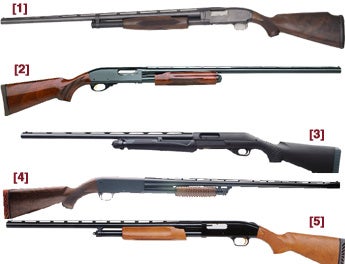 If the genteel sport of upland hunting is the yin of wing-shooting, then waterfowl hunting is most certainly the yang. Waterfowling is not a sport for wimps; it’s down-and-dirty, nasty-weather, extreme bird hunting. As tough as waterfowling is on hunters, though, it’s even tougher on shotguns. Rather than being transported in a sheepskin-lined leather case, a waterfowler’s shotgun is likely to ride naked in a muddy canoe. It has to keep working through mud, snow, dirt and debris that would have lesser guns running back to the gunsmith. This is why pumps are so prevalent.

The pump-action might be the most popular repeating single-barrel shotgun ever developed. Pump guns keep working when other guns fail because they have a less-complicated design that depends on the hunter to power the action rather than a complex set of ports and pistons. The pump shotgun embodies the values of blue-collar America: It’s dependable, hardworking and unpretentious.

The top five pumps? That’s like naming the top five supermodels. I never saw one I didn’t like, but based on my personal experience, here are my picks.

**1. Winchester Model 12 **
Winchester has a long history of pump shotguns that goes back to the Model 1893. That gun was replaced by the Model 1897, which was widely used out West during the last days of the frontier and gained fame as a battle gun in the trenches of World War I. Today it’s again in great demand by cowboy-action shooters. Obviously it was a great shotgun design, but from a waterfowler’s perspective the version that replaced it, the Model 12, is even better.

The Winchester Model 12 was introduced in 1912 and was the company’s first hammerless shotgun. Through its storied history, more than 1.9 million of these takedown shotguns have been sold, and a lot of them show up on the marshes each year. Just as the Winchester Model 70 is often called the “Rifleman’s Rifle,” the Model 12 might be called the “Shotgunner’s Pump Gun.”

2. Remington Model 870 With sales of more than 9 million, the Remington Model 870 is the most successful pump shotgun of all time. Since its introduction in 1950, the 870 has likely accounted for more roast duck on the dinner table than all other pump guns combined.

In 1950, Rudy Etchen was the first to break 100 straight in registered trap doubles with a pump gun. He used one of the first twelve 870 shotguns made and went on to repeat the feat so many times that he lost count. They called him “Mr. 870,” but many also called him the best all-around shotgunner in the country. Etchen shot competition with the 870 for nearly 40 years. Any gun that can take 40 years of punishment and keep firing is tough enough for duck hunting.

4. Ithaca Model 37 The Ithaca Model 37 pump-action shotgun was introduced in 1937. A classic pump shotgun from a classic shotgun company, the bottom-ejecting Model 37 is for many hunters the epitome of what a pump-action should be. It has a rather distinctive feel, and generations of hunters have grown up honing their shotgun skills with one.

** 5. Mossberg 500** What the Model 500 lacks in looks and polish, it makes up for in affordability. A budget price has let millions of hunters buy a new gun when they thought they couldn’t. I bought mine while it was frozen in ice in the bottom of a canoe-giving me a good bargaining position. I cleaned the 500 thoroughly and have shot ducks with it for 20 years.