Gear and techniques you need to reload your shotgun quickly 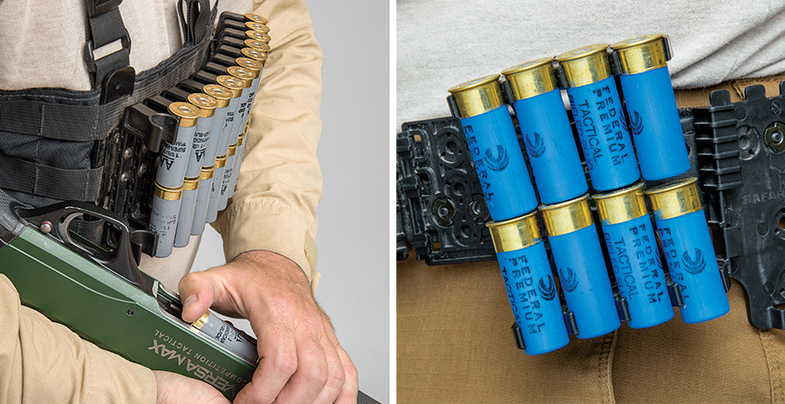 There are three keys to doing well in 3-Gun. You have to shoot your pistol quickly, your rifle accurately, and be able to reload your shotgun in the blink of an eye.

This last skill is the least fun of the three, but it’s arguably the most important. Because of the shotgun’s limited capacity, and the mix of slug and shot targets that require different types of ammo, it is the most difficult gun to master. Put another way, the shotgun is the easiest of the three to mess up.

Quad loading, where the shooter would strip four shells at a time from racks mounted on belts or harness gear, was the go-to technique for many years. It took countless hours to develop the dexterity to load this way, however, and many shooters just never quite mastered it. On stages where the shooter’s technique went south, it wasn’t uncommon to see shells scattered about like rose petals at a wedding as the poor shooter fumbled to get his shotgun back in action.

Then along came the load-two method.

The technique of load-two is—forgive the pun—simple to grasp. There are several styles of shell holders on the market for load-two, but one feature they all have in common is that the shells are stacked two-high in a series of columns. The shells on top are gripped by the brass, while the lower shells are held by the mouth of the hull near the crimp. This leaves the center part of each pair of shells free to be gripped properly as they are tugged free from the carrier.

Two Rigs
I have been using two styles of load-two carriers in competition during the past year, both of which have served me well.
My main load-two system is the SSL Chest Rig from Carbon Arms ($250; carbonarms.us). It holds a total of 24 shells across the center of the shooter’s chest, putting them in an ideal position to execute the load-two technique. The straps on the system allow it to be adjusted to fit any shooter’s physique and snug the shells against the torso, minimizing unwanted movement.

The clips are easy to load and provide excellent shell retention without requiring excessive force to pry the shells free.

The only drawback to the system is that the harness cannot easily be rotated out of the way. On stages where the shooter needs to go prone, it is useful to be able to slide the carrier to the side or all the way around to the back to position the shells on the shooter’s side or on his back. Lying directly on top of the carrier can cause shells to pop loose.

I was able to figure out a way to quickly re-rig the system to allow for this flexibility, but it requires some experimentation.

The other load-two carrier I use is the Taccom Duelin Deuces shell holder ($45; taccom3g.com). The Duelin Deuces mounts to a shooting belt and positions the shells so that they angle away from the body. This feature is no gimmick. Stacked this way, the shells can be grasped in a more natural fashion without contorting the arms or hips. The carriers can also be tilted at an angle for an even more ergonomic fit.

The retaining clips on this system do a terrific job of holding the shells in place until needed. The force required to free the shells from the carrier is greater than with the Carbon Arms unit, but it never hindered me in competition. The unit holds eight shells.

Typically, I run my standard target loads in the chest rig and put my slugs or high-velocity shotshells in the Duelin Deuces holders and pull from each as needed.

The Technique
As the name implies, shells are gripped two at a time in the shooter’s hand. Before this happens, though, the shotgun needs to be dismounted from the shooter’s shoulder and positioned so that it can be reloaded.

The closer you can get the loading port to the shells on your load-two carrier, the less distance your loading hand will have to travel, saving time.

When gripping the shells, start by placing the thumb of the hand that will be loading on top of the brass on the top shell. The fingers of that hand will naturally curl around the two shells, keeping the shells aligned as they are pulled free from the retaining clips.

Guide the shells into the loading port with one firm, swift motion. It is vital to follow through so that the thumb continues to travel beyond the receiver. If the motion is too tentative, the second shell won’t get fully inserted into the magazine; going too hard will bruise the thumb. It takes practice to develop the correct feel.

The learning curve with this technique is not too steep, however. When you’ve got your groove on, at the sound of the buzzer you should be able to dismount the shotgun, load 10 shells, remount the shotgun, and get off an aimed shot in less than 10 seconds. With some practice, that time will dip to 8 seconds or less.