Treasure hunting for fine old shotguns pays rich dividends...if you know what to look for. 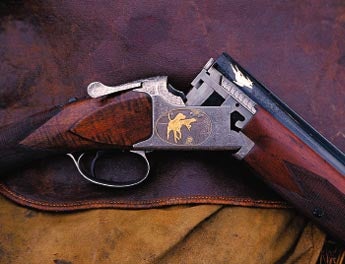 How many investments can you name that virtually guarantee a sizable return on your money while offering the added bonus of pride of ownership? Buying antique automobiles might be one, and collecting fine art is certainly another, but if you didn’t say gun collecting, you missed one of the surest bets around. But first, what is a gun collector?

According to the media, a gun collector is some weird misanthrope who stockpiles guns and ammo in anticipation of an invasion from government agents in black helicopters. This is about the same as calling a collector of Islamic art a terrorist. More to the point, the guy who owns a rifle for once-a-year deer hunts is simply a gun owner. Whereas someone-you, for example-who buys guns because he admires their beauty, workmanship, function and value can rightly call himself a collector. It is here that we recognize the similarity of collecting guns to collecting other forms of art.

All collections, whether they’re guns or art, begin with the acquisition of a single piece. As is true of the art collector who begins with a single painting or sculpture for a few dollars and grows his passion into a collection worth millions, the collector of guns needs an eye for beauty, style and talent, plus the shrewd investor’s sense of what will be in demand years hence. Unlike art collectors, however, who depend on capricious critics, the whim of fashion and a certain amount of luck, gun collectors play by safer and more predictable rules.

As with art, old cars and other items worthy of collecting and investment, there are several categories of gun collecting. Of these, perhaps the most exciting is “treasure hunting,” in which the collector prowls gun shows, pawn shops, yard sales and even obituary pages. (“Sorry to hear about your husband, ma’am. Wish I had known him. By the way, did he leave any old guns?”) These collectors need a broad knowledge of guns and their value, plenty of time and the dedication of a bloodhound. The thrill of the chase is part of the charm of hunting gun treasures and is occasionally spurred by reports of collectors finding beauties like a Walker Colt revolver in a junk shop for a few dollars and reselling it for a quarter mil. However, the likelihood of such finds is slightly better than that of discovering a doubloon-laden Spanish galleon in your swimming pool.

Another type of gun collector is the specialized-category connoisseur who sets out to accumulate specimens of only one brand or even a single model within a brand, say Parker or Fox shotguns, Colt pistols or Winchester rifles. This is a fairly secure and disciplined form of gun collecting with broad appeal, because it offers pride of ownership (and the envy of other collectors) with an almost guaranteed return on your investment (provided, of course, you’ve bought prudently).

These and other types of gun collecting have their own attractions, but don’t lose sight of the fact that those old and rare Parkers and Winchesters were once new, and were bought to be used. That’s why I advise fledgling collectors to take a careful look at the guns being built today and decide which of them will be a rare jewel tomorrow. Perhaps surprisingly, there are some solid rules to follow that will virtually assure a sound investment.

Rule 1: Trust your sense of style and taste
If it turns out later that your choice wasn’t such a smart investment after all, at least you’ll have a gun you enjoy looking at and using.

The best example of tasteful gun buying I can think of occurred just a few months after my wife, Linda, and I were married. We were at a firearms trade show, her first ever, and while I went about my business she wandered off to learn what sort of peculiar world she had married into. A couple of hours later she caught up with me and made a startling announcement: “I’ve bought a gun.” This bit of news, I admit, was mett with apprehension. After all, she knew little about guns, had never bought a gun in her life and being, well, a woman, might have been attracted to all sorts of chrome-plated claptrap. Keeping a stiff upper lip, I allowed her to lead me to the manufacturer’s exhibit where she had purchased her first gun.

Astonishment does not nearly describe my reaction as she proudly pointed to a 28-gauge Parker reproduction side-by-side double complete with gorgeous wood, skeleton buttplate and fitted leather case. Of the hundreds of guns on display at that show, she had picked the most beautiful and stylish. Later that day, over olive-bearing refreshments, I confessed my amazement.

“Why did you buy that particular gun?” I had to know.

I’ve read scores of gun books and hundreds of articles on the subject, not counting the hundreds I’ve written myself, but never have I seen so much gun wisdom expressed in so few words. So remember, when investing in a gun-does it look like a gun ought to? Trust your good taste.

Rule 2: Seek guns known for increasing in value
The bluest of “blue chip” shotgun investments has long been side-by-side doubles, with certain over/unders also being highly desirable. Smaller-gauge guns almost always appreciate faster than larger bores simply because there are fewer of them.

Parker Brothers doubles in 12-gauge DH Grade now sell for upward of four grand, whereas you can expect a 28-gauge in the same grade to fetch half again more. An indicator of the increasing demand for good doubles has been the value escalation of Model 21 Winchesters. Nowadays you’re lucky to find a good used 12-gauge for $3,500. If you had bought the same gun new 10 or 20 years ago, you would have made a solid 10 percent per annum on your investment, in addition to owning and using a shotgun that says a lot about who you are.

Rule 3: Buy the best you can afford—plus a little extra
I have frequent urges to kick myself, usually when I look at a gun I once bought with great pride and now wish I had bit the bullet harder and stretched my finances a bit further.

Higher-grade guns appreciate at a faster rate because there are simply fewer of them available. Research the value index of Belgian-made Browning Superposed shotguns in the various grades and you’ll get an eye-popping example of the incredible return on high-grade guns.

Likewise, when investing in used guns, buy only the most pristine examples. That will ensure that when you choose to sell or upgrade the gun, the buyer won’t have anything to complain about except your price.

Some years ago, when I was a member of a panel discussion on gun collecting, someone in the audience asked if I ever regretted selling any of my guns. “Sure,” I confessed, “every one of them.” And therein lies the fallacy of collecting guns as an investment: A fine gun becomes a lifelong friend, providing practical use and enjoyment and requiring only simple care in return. Friends like that are hard to find, and even harder to part with. Now go back and read my first rule.