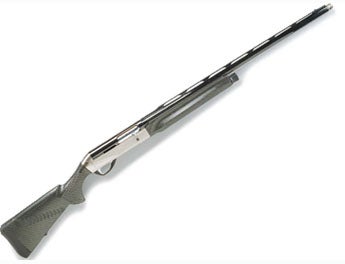 To paraphrase a famous comment about the weather, “Everybody talks about recoil, but nobody does anything about it.” Sure, we’ve been trying to ease the pain of recoil ever since we started fiddling with gunpowder, but the staple cures-rubber butt pads for instance-have been like taking Band-Aids to a sword fight. Recently, however, recoil has been the focus of serious thought, and some of the results are quite amazing.

One innovation is a system developed by Benelli called ComfortTech, which is featured on a series of shotguns, including the top-of-the-line Benelli Super Sport autoloader, which I recently tested extensively. By “extensively,” I mean firing something like a thousand rounds per day for three days in a row, at the end of which my arms were too tired to raise the gun for another shot but my unbruised shooting shoulder could have gone on forever.

Before explaining how this revolution in recoil reduction works, let’s look at the Benelli Super Sport from the inside out. When gas-operated shotguns appeared a half century ago, the event was hailed as the end of recoil-operated autoloaders-particularly the old Browning-type “long recoil” guns in which the barrel recoiled into the receiver, creating the distinct “double shuffle” effect that seems to magnify felt recoil. Thus, gas-operated systems that operated more smoothly and were cheaper to manufacture than spring-recoil guns became the design de rigueur. Until, that is, the recent introduction of recoil-operated shotguns in which the barrel is fixed, with only the bolt unlocking and cycling the mechanism. This system makes the Super Sport cycle so fast that the sensation is almost like shooting a solid-breech gun rather than the familiar ker-chunk feel of an autoloader cycling. This new feel, combined with Benelli’s innovative ComfortTech stock, makes it the softest-kicking 12-gauge gun I’ve ever shot.

Rather than simply inventing a softer recoil pad, Benelli engineers went back to square one to investigate where and how we feel recoil. For example, look at the typical flat-faced or slightly rounded recoil pad. It’s pretty perhaps, but how exactly does it fit the “pocket” of your shoulder when you mount a gun? Benelli’s solution is a distinctly lopsided pad with a ridge that fits into your shoulder crease and distributes recoil over a wider area rather than localizing it in a smaller, inevitably bruised spot. The ComfortTech stock also has a comb insert that is not only semi-soft but made of the slick stuff used in some hospital bedding to eliminate skin abrasions.

Things I like about the gun, in addition to its quick function, easy disassembly and Comfor- Tech stock (of course), are its tapered rib (.390 to .325 inch) and the extra long 3½-inch choke tubes that extend ¾ inch from the muzzle. You can also change the stock dimensions by means of shims that are easily fitted behind the receiver, and a shorter recoil pad is available for shortening pull to 14 inches. Reversed-contour recoil pads for southpaws are also available and necessary.

And what don’t I like? The trigger pull, which in my sample varied from 5 pounds 2 ounces to 5 pounds 12 ounces. Benelli needs to work on that. Even so, I liked shooting the Super Sport so much that I bought it.