When deer head to the hardest-to-reach places they can find, these tactics will push them out. 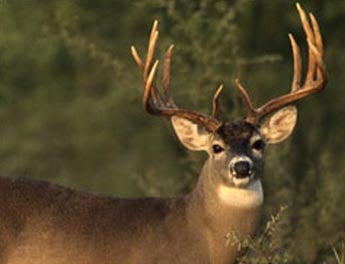 Intent on gaining as much ground as possible in the few seconds he had to work with, Rick Petersen took a firm grip on his gun and sprinted down the field lane. Moments before, his brother Dave had yelled from somewhere deep in the jungle of tall grass and weeds that a buck was coming out. Now, his breathing labored, Petersen skidded to a halt as the buck suddenly stepped from the switchgrass, broadside on the trail in front of him.

“My 4X scope is sighted-in at 80 yards and I figured that was about how far he was,” Petersen says. “At the shot, he didn’t appear hit, and then he began running away from me, down the trail. In seconds he was out of sight in the timber that borders the field.”

A close inspection of the spot where the deer had been standing revealed blood. Aided by a dusting of snow, Petersen was able to stay with the tracks until he finally jumped the buck from a rose thicket at close range. A slug to the vitals finished the hunt. The long-tined 10-pointer had a net typical score of 1707/8 Boone and Crockett points. What’s more, this was the second year in a row that Petersen had taken a B&C; buck on a drive through the same 28-acre patch of switchgrass. The previous year the eastern-Iowa hunter took a 2137/8-point non- typical on a similar hunt.

In each case, the hunting group consisted of only three or four people. And in both cases, the hunters followed a handful of simple rules that apply to any small-cover drive:

Hunt non-traditional cover: Small patches of atypical deer cover produce excellent bucks for hunters willing to invest the time to hunt as many of them as possible. Conservation Reserve Program (CRP) lands, brushy fence corners, pheasant sloughs and tiny woodlots are all worth driving.

**Dig them out: **”That switchgrass field is so thick and tall you can barely fight through it,” says Petersen. “That’s why the deer flock in there once the season starts.” Drivers should make a special effort to bust through every bit of cover, no matter how thick it is. It’s amazing how a big buck can flatten himself against the ground and disappear in cover barely high enough to conceal a cottontail. In such situations, deer won’t run unless you nearly step on them. So don’t assume that a likely looking patch of cover is empty just because a buck doesn’t crash out when you stroll past.

Hide the standers: The key to hunting small cover is getting your standers into position without being detected. And the best place to position standers is not along the cover being driven, but near the cover that deer will probably flee to. So instead of risking the whole drive by getting the standers too close to the cover you’re planning to hunt, keep them out of sight completely. In open terrain, that may mean as far as a mile away from the area being driven.

I grew up on the rugged bluffs that border the Mississippi River. The steep slopes and wide draws (some a mile across) make drives challenging in this big country. With so many escape options available to them, bucks need only make it through their first fall to learn enough tricks to circumvent drives for the rest of their lives. Which is why bucks in this country often live to a ripe old age despite the heavy pressure.

Some hunting parties try to meet these terrain challenges by temporarily reinstating the draft. Orange armies numbering 30 or more are convoyed from one drive location to another with the logistic precision of a Desert Storm deployment. But this isn’t my kind of deer hunting: There are too many people and too much commotion.

You don’t need a huge group to be successful in big country, but you do need a well thought-out game plan:

Post natural escape routes: Deer prefer to stay in cover as long as possible before baking across open ground. One of the keys to driving rugged country is to position a stander on each of the many points or fingers that extend out from big timber.

Keep it short: I’ve watched drivers try to move deer for two miles around long ridgetops. The simple fact is you can’t push deer that far; they’re sure to double back or squirt out the sides. On long pushes, the drivers are often the only ones who see deer. The shooting for them is, at best, very challenging — and it can be downright dangerous. Divide a large block of timber into sections that can be driven more effectively. Consider drives of a quarter- to a half-mile as the upper limit.

Stop-and-go: When you’re covering a lot of ground, drivers are often forced to spread out 100 yards apart or more. Every survivor-buck in the county knows how to slip through a net that porous. But if you stop the drive periodically, you can scan the woods and possibly unnerve a buck to the extent that he’ll jump up and start running. Whistle blasts from the drive captain can signal the team to stop and start on cue.

Obviously, you’re not going to comb the woods with only one driver and one stander, so you’ll have to rely on savvy and experience. While the role of the driver is simply to get bucks up and moving, the stander must anticipate what escape route they’ll choose and be there waiting for them. As long as the pace of the drive is kept slow, a buck that’s been kicked up won’t panic; he’ll simply sneak out of the area, hopefully using the escape route that you will be watching.

Identify escape routes: Bucks will sneak out of an area the same way every time they’re pushed. Learn from the past. Ask yourself in which directions bucks left their bedding areas last year.

You can also determine a buck’s preferred escape routes by scouting a couple of weeks ahead of the season. As you gently push deer from their beds, watch which way they head. Study tracks in soft ground to decipher the story. Bucks usually follow a safe distance behind the rest of the herd, taking advantage of dips in the terrain to keep a low profile.

Stealth is the key: We’ve said it before — the success of the whole strategy depends on the stander’s ability to slip into position without being seen, heard or smelled. If deer know that a stander is in the woods, it’s all over. Use the terrain to good advantage, and always check the wind.

Mature bucks have an uncanny knack for finding the weak spot in an oncoming line of drivers and slipping through it. Rarely will you push a big buck in a straight line for more than a few yards before he starts looking for a way out. Deer know that to travel too far in one direction is to invite danger. Smart hunters recognize this instinct, and set up drives to take advantage of it.

Slam the back door: If you’re driving fairly small blocks of cover, such as creek bottoms, small draws or woodlots, leave a stander at a vantage point near the spot where the drive started. Bucks that double back through the line of drivers are likely to exit the cover somewhere in this area.

The delayed driver: If you’re hunting larger blocks of cover, such as continuous sidehill timber or long river-bottom sections, bucks are still going to double back, but they may only circle instead of breaking cover. One or two hunters stillhunting slowly behind the primary line of drivers have a good chance of catching a buck as he works his way back through, or circles around, the drive.

Delayed drivers should wait five minutes or so after the main group is underway before slipping into the woods. Always stay at least 100 yards behind the main line of drivers.

Delayed drivers should be especially alert and follow a slow, stealthy course that winds past the area’s thickest cover. That’s where a circling buck is likely to head for refuge until things settle down.

Safety is an obvious concern here. Only responsible, seasoned members of the party should be considered for this important role. And even they should be reminded of the golden rule on deer drives: Never shoot until a buck has completely cleared the line of drivers in front of you.

urse that winds past the area’s thickest cover. That’s where a circling buck is likely to head for refuge until things settle down.

Safety is an obvious concern here. Only responsible, seasoned members of the party should be considered for this important role. And even they should be reminded of the golden rule on deer drives: Never shoot until a buck has completely cleared the line of drivers in front of you.