Two-Year-Old Toms Are the Bad Boys of the Spring Turkey Woods. Here’s How to Hunt Them

Young toms are a gift from God. Here's what all turkey hunters should know about them 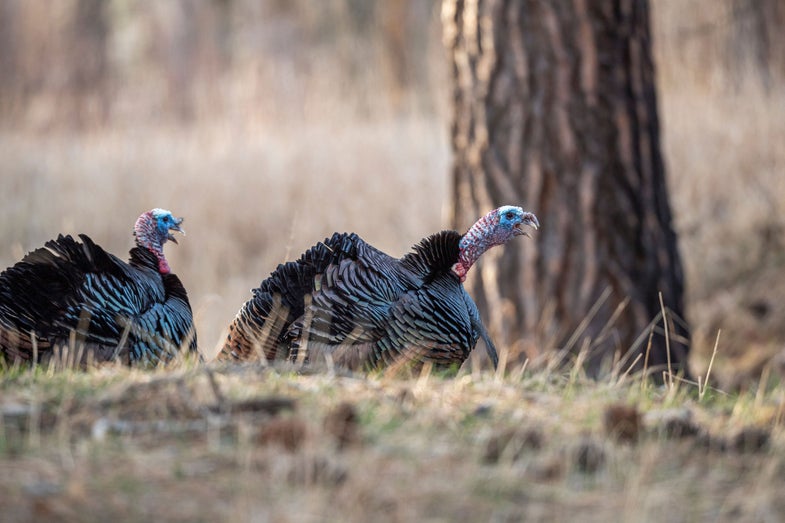 Two-year-old toms can save your season. John Hafner
SHARE

A Southern gentleman once told me that God’s greatest gifts are fine shotguns, smooth whiskey, and two-year-old turkeys. I agree, though I’m not sure he got the order right.

Long on beards and hormones and short on brains, the turkey world’s version of 19-year-old boys are responsible for most of our spring hunting success. In good years, two-year-old toms may make up 60 percent of the spring harvest. In tough years, knowing how to find and work a two-year-old can salvage your season.

How to Age a Wild Turkey

It’s tough to get a precise age on a mature wild tom in the field. However, two-year-old toms have well-rounded fans, like older gobblers, though their beards may be an inch or two shorter. Usually they weigh 15 to 20 percent less and look a tad shorter and thinner through the chest. Once the gobbler is down, the best option for hunters to estimate age is to look at spur length. According to the National Wild Turkey Federation: “Biologists generally suggest using the following measurements to judge gobbler age. Gobblers with spurs one-half inch or less are juveniles, 5/8 inch up to 1 inch are 2-year-olds, 1 to 1 3/8 inches are 3-year-olds and birds with spurs greater than 1 3/8 inches are older than three years. Gobblers with longer spurs (1½ to 2 inches) probably range in age from 5 to 8 or more years.

In other words, it’s easy to tell the difference between jakes, two-year-old toms, and older toms, but it’s difficult to age toms that are older than three.

Overflowing with desire, but generally denied hens by older toms, many two-year-olds gobble and strut just because they can, and often come to calls with a show worthy of a Super Bowl halftime.

Never discount what a two-year-old will do. I’ve seen them strut across a small tree fallen over a deep ditch, and I’ve had to swing through and shoot them in the back of the head when they’ve been so excited they’ve raced right past my location. Aggressive staccato cutting and long strings of excited yelps can amp their testosterone to meltdown levels. I’ve shot one of a pair of two-year-olds, and the survivor never broke strut, even when I revealed myself to pick up his very dead friend.

An hour into my son’s first solo hunt, he called a pair of two-year-olds across more than 500 yards of open ground, gobbling at every call, eagerly leaving a sizable flock of hens and an older tom.

But for every kamikaze, there’s a two-year-old coward, which probably has something to do with the emotional and physical scars accrued from bigger toms repeatedly gouging them with 16-penny spurs. Often those hard-gobbling birds that won’t budge to your calling or repeatedly circle like a satellite are two-year-olds walking with a limp and missing about half their fan feathers, afraid of getting another licking.

This aversion to bullies may cause two-year-olds to wuss out instead of coming to your full-bodied gobbler decoy. Jake decoys set horizontal to the ground, rather than upright, will seem less threatening to an approaching bird. If possible, arrange your setup so a shy tom has to pass you to get to the decoy if it hangs up.

Identifying Two-Year-Old Toms on the Roost

Early in the season, lone two-year old toms might gobble their heads off all morning. These are ideal birds to punch your tag on right away. Later in the season, when there’s competition over hens and mature toms roost near their harem or hens, listen for younger, sub-dominant toms roosted nearby (within a quarter-mile or so). The mature tom will likely gobble hard while he’s on the roost, but once he flies down and collects his hens, he’ll go quiet. This is a tough bird to hunt, because he’ll be unwilling to leave his hens. A satellite two-year-old tom will often gobble less while he’s on the roost, but he’ll often be more susceptible to your calling.

Often times a hunter will set up on the boss tom, fail to call and decoy him in, but then have a two-year-old tom sneak into his setup instead. With a little good shooting, the hunter goes home happy. If I have the option of trying to hunt a boss tom with hens or a sub-dominant two-year-old tom that’s all by himself, I’m picking the latter every time. Fine tuning your turkey scouting will help you target easier birds (read about how to scout for turkeys here).

Two-Year-Old Toms Will Give You Multiple Chances

Unlike older birds, the two-year-old you don’t kill at one setup will probably give you another chance. Last opening morning, a two-year-old circled wide of my setup, intimidated by my strutting fake.

That afternoon I came from another direction, setting out a lone hen decoy. The gullible gobbler sounded immediately when I called. When he came into view, I saw he had a bigger, and probably older, tom cautiously following behind. No doubt the veteran gobbler would have been in range shortly if I’d given him a chance.

As soon as the two-year-old strutted to 25 yards, I folded him up like a clean pair of socks. I never turn down a gift from God.