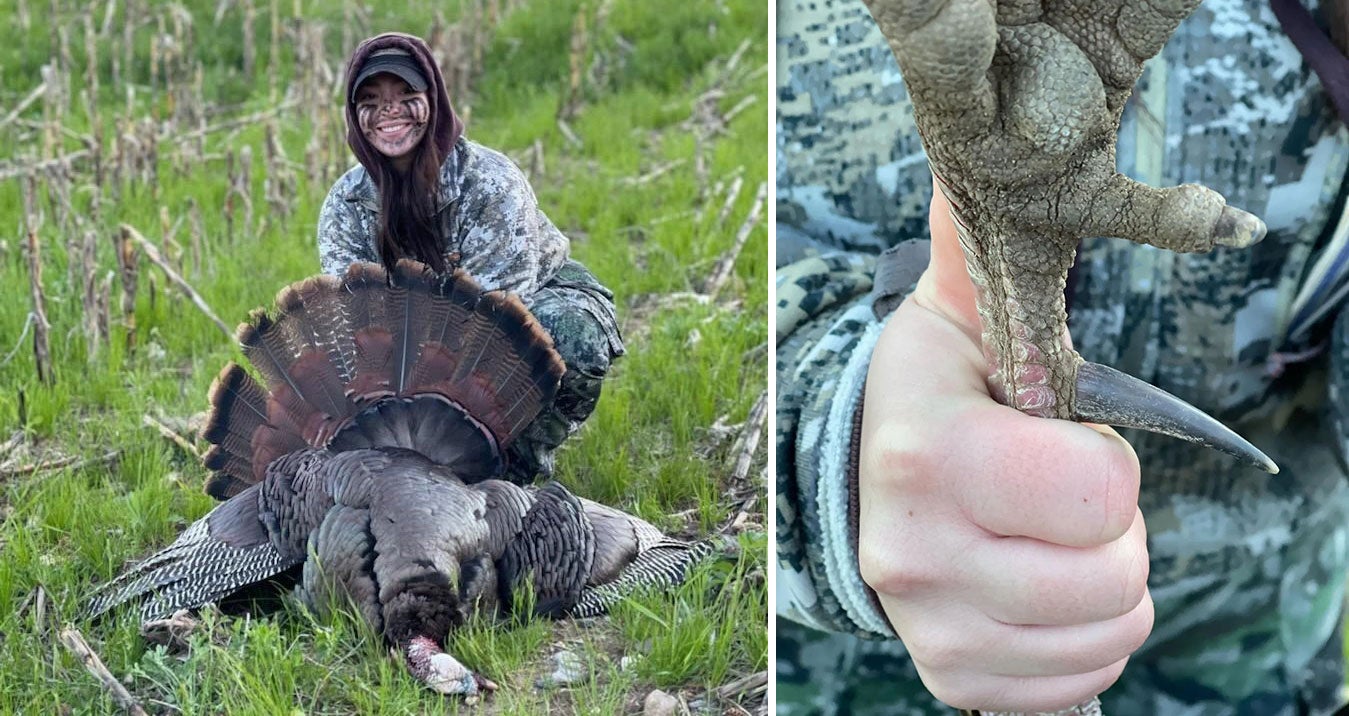 It took Emma Dearing eight years to shoot her first turkey, but the bird she finally killed was worth the wait. Her tom is almost certain to become the number one typical turkey ever taken in Minnesota.

Dearing’s gobbler is a giant by any measure. Weighing 23.74 pounds, it had an 11.25-inch beard and spurs measuring 2 inches and 1 15/16 inches. The typical bird scored 86.25 when it was measured by National Wild Turkey Federation members Taylor Harmon and Neal Herrman of Barron, Wisconsin.

Dearing, 19, was hunting at dawn on May 22 on a 40-acre tract of private property in Central Minnesota’s Wright County. She had hunted the property twice that spring, including the previous evening when she’d spotted a gobbler and a hen 200 yards away, but they wouldn’t work any closer.

The following morning, she was in the same area sitting with her back against a tree and a 12-gauge Remington 1187 in her lap. She had her friend Jenassa Faith with her. Behind the two girls was Dearing’s brother Colin, who was doing the calling.

“Not long after daybreak Colin got some birds gobbling, and four jakes soon came in from behind us,” says Dearing, who will be a sophomore in the fall at Minnesota State University. “I’m used to hunting out of a blind, not in the open. When they came in from behind us I moved too much and spooked them. They were so close I could almost touch them with my gun barrel. I really messed up, and I was mad at myself because I’d have shot one of those jakes, since I’d never taken a turkey.”

But all was not lost. Fifteen minutes later, the biggest recorded tom ever shot in Minnesota showed itself.

“He came in from behind us, and Colin called him across a road and through a fence,” says Dearing. “He never gobbled close, but we heard him drumming, and then he just ran right into our decoys.”

The giant tom ran by a hen decoy and was well within range for Emma, but she didn’t want to shoot the bird while it was moving. Finally, it slowed near a jake decoy, and walloped the fake bird a couple times with its wings.

“I couldn’t shoot the gobbler because he was too close to the decoy, and my brother was telling not to shoot because decoys cost too much,” Dearing says. “So I waited for the gobbler to separate a bit from the decoy and when he did, I shot him at 12 yards with a load of Federal No. 5s.”

The bird dropped on the spot, and the trio of turkey hunters were overjoyed at Dearing’s first tom. Little did they know that it would likely be a new state record, surpassing the current NWTF record bird that was taken in 2003 by John Kuhl and scored 84.5625.

“I’m so fortunate that I didn’t shoot one of those four jakes that came in behind us that morning,” says Dearing. “If I’d shot a jake I never would have taken my tom, which is surely going be the biggest gobbler of my life.”

Emma is having her turkey mounted by River Point Taxidermy, with the bird walking in full strut, which will show off the bird’s impressive fan and giant spurs.