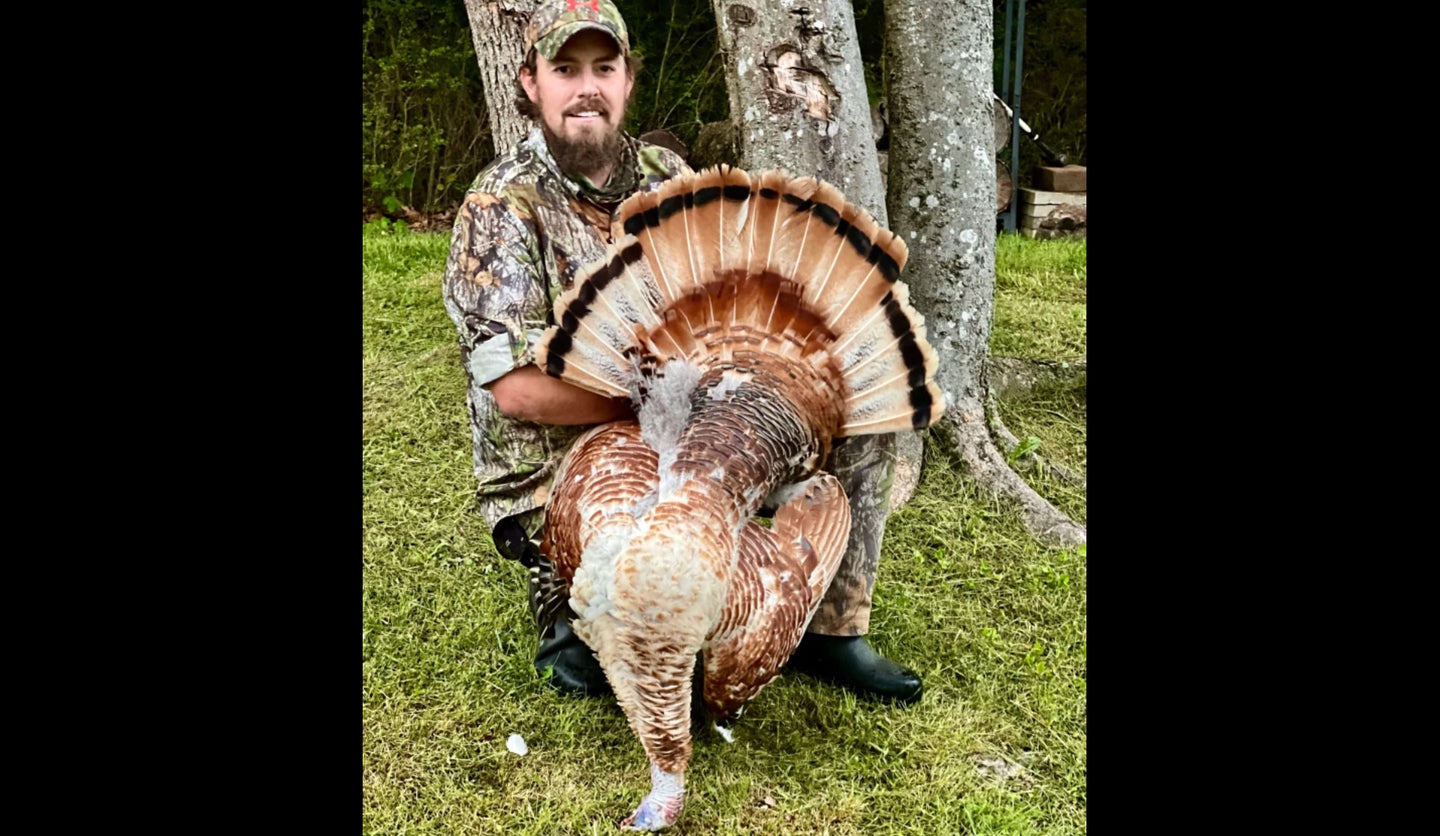 Tennessee hunter Tyler Hughes, 32, is a lifelong outdoorsman. Hunting is in his DNA, he says, and he learned from his father on the game-rich lands near their home in Waynesboro. But turkey hunting is what fires him up the most, and when his dad told him about a trio of cinnamon-colored jake gobblers he’d spotted on the property they’ve hunted for seven years, Hughes was ecstatic.

“My dad found the birds about a week into the Tennessee turkey season and told me about them and where they were,” says Hughes, a maintenance worker. “I immediately started looking for them, and finally saw them a few times. I just couldn’t close the deal, even though I got close a couple times. They were sometimes with hens and wouldn’t come when I called.”

Finally, after work on May 6, Hughes was driving to their hunting property for an afternoon chance at a tom when he drove near a large field close to a hardwoods he often hunts.

“I looked across the field and about 500 yards out I spotted the birds,” he says. “They were so light colored it was like seeing snowballs on the ground in summer. There was no doubt it was the three cinnamon jakes, and they were moving toward a hardwood stand next to the field where’d I’d roosted turkeys often over the years.”

He quickly parked, gathered his hunting gear and shotgun, and eased up to the field where the birds were still meandering toward the hardwoods.

“I had to belly crawl to the hardwoods edge so they wouldn’t see me,” he says. “I had to crawl about 100 yards before I reached the woods cover, then got to a timbered spot where I thought they were headed.”

Hughes settled into a sitting position, clucked a few times softly with a mouth call, and the birds instantly started working directly to him.

“They weren’t running, but they came at a steady pace until the lead bird got to shotgun range and I took him first chance I got,” he says.

Hughes hit the bird at 50 yards with a full load of 12-guage, 3-inch No. 7 shot from a Federal TSS load. The jake folded and flopped once, and he was up and on the bird quick as a cat.

“I was so excited. I had to get my hands on that bird,” he says.

The 18-pound jake sported a 5-inch beard. Its plumage is a rich cinnamon color, which is a type of erythristic color phase, according to the National Wild Turkey Federation. Neither Hughes nor his dad—nor any of their friends and neighbors—have ever seen such light color-phase birds in the area. His dad hunted the area several times after Hughes took his jake but never saw the cinnamon birds again.

“I’m just glad there are at least two more cinnamon-phase gobblers on the loose there, because next year they’ll be two years old, and maybe I can get one,” Hughes says.

He says the meat from his jake looked the same as any wild turkey. He has already done a full cape skinning of the bird and plans to mount it on a plaque for display in his home.